Irony in "The Story of an Hour"

There are many types of irony such as basic irony which is the use of word to convey a meaning that is opposite of its literal meaning. Situational irony which is the moment a characters actions have the opposite of their intended effect. Finally there is dramatic irony which occurs when there is a contrast between the readers knowledge and the knowledge of the characters in the work. However situational irony is what mostly transpires in Kate Chopin short story “The Story of an Hour”

Situational irony is used in “The Story of an Hour” through Mrs.

Don't use plagiarized sources. Get your custom essay on
“ Irony in “The Story of an Hour” ”
Get custom paper
NEW! smart matching with writer

Mallard’s reaction to her husband’s death. When she first heard the news of her husband’s death, Mrs. Mallard, “wept at once, with sudden, wild abandonment” (Chopin, 1). Everyone in the house thought that she was upset and went upstairs to be alone in her room because this is a common reaction after having just lost a loved one. Although once Mrs. Mallard is alone in her room, Chopin wants the reader to witness that she is not saddened by the loss of her husband but relieved, “When she abandoned herself a little whispered word escaped her slightly parted lips.

She said it over and over under her breath: “free, free, free!”” (Chopin, 1) Although Mrs. Mallard is “free” from her marriage that does not mean that she did not love her husband, as she looks through the open window from which she gazes represents freedom and opportunities.

Instead of being dark and full of grief to symbolize how one would expect her to feel, she sees patches of blue sky, fluffy clouds and treetops.

She also hears singing of birds and smells a rainstorm coming. Chopin signifies this as new beginning for Mrs. Mallard. Everything that she experiences through her time of “mourning” suggests joy and a new life that awaits her. She is expected to mourn her husband’s death, but she is thinking about her new life “There would be no one to live for her during those coming years; she would live for her self” (Chopin, 2) this is to be understood that she has sacrificed her life for her husband, although there is no evidence that her husband has done her living “for her”. The language Chopin uses throughout her story foreshadows the ironic happiness that she feels with being free.

Chopin further more tries to explain that she is not only feeling happiness through her husband’s death when she writes, “She knew that she would weep again when she saw the kind, tender hands folded in death; the face that had never looked save with love upon her, fixed and gray and dead.”(Chopin, 1) It is not clear on why Louise Mallard feels this way about her husband’s death because there is no evidence on any physical or emotional abuse, repression or neglect from her husband “it might have been external, in society or in her marriage or whether it was internal, a recognition that it takes strength to control one’s feelings or whims.” (Berkove, 153).

Through Louise’s recognition that she is free from her husband there is situational and dramatic irony as well. While she was alone in her room she realized that she would no longer be bound to her husband but rather free to do whatever she should choose, ” “Free! Body and soul free!” she kept whispering.” (Chopin, 2) She continues to whisper this to herself because although she is alone in her room she acknowledges that she should not be having such thoughts and does not want anyone to know how she really feels about her husband’s death. No one else knew this, they all believed that she was sorrowful and wanted to be alone to grieve. Josephine, a woman in the house, even though Mrs. Mallard was making herself sick, but in reality Louise was absorbing the days ahead of her.

Her overwhelming joy all comes to an abrupt stop when she descends from her room to only find out that her husband is not dead. She is so shocked to see her husband that she has a heart attack and as doctors described it as, “joy that kills,” which is perceived as the dramatic irony part of the short story. Everyone believes she died in that way so the reader can actually realize that she was in fact not joyful to see her husband instead in disarray and upset that she only had a glimpse of real freedom and would rather be dead than to go back and live the life she had. “Louise dies in the world of her family where she has always sacrificed for others” (Ewell, 160.)

Kate Chopin’s “The Story of an Hour” is one of the many books that says “so much in so few words” (Berkove, 152). The irony in her story is almost never ending. Louise Mallards life after discovering about her husbands death is the true meaning of “the story of an hour” because she had a quick look of how her life was going to be.

Irony in "The Story of an Hour". (2016, Aug 09). Retrieved from https://studymoose.com/irony-in-the-story-of-an-hour-essay?post 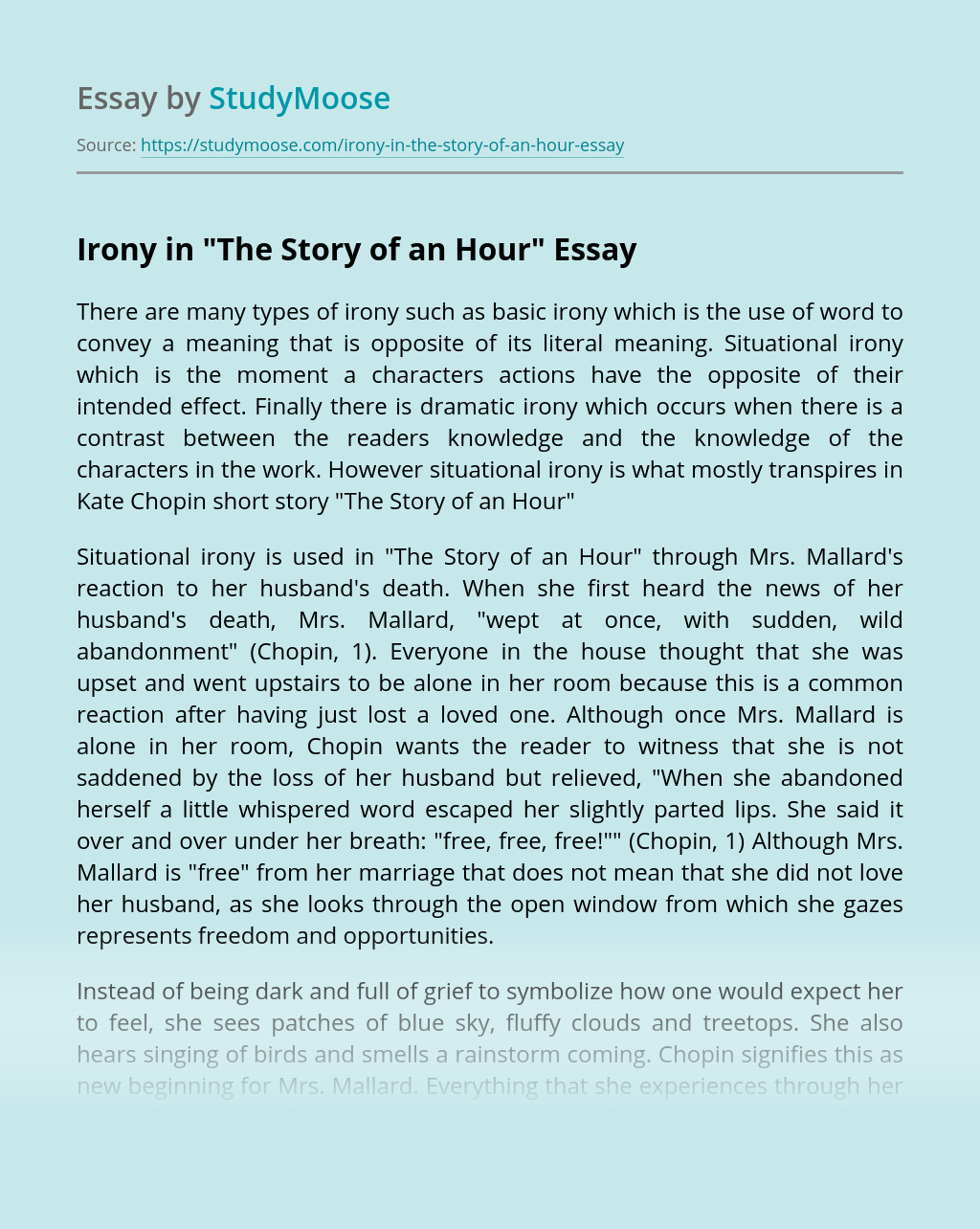