Irony in Jack London's To Build a Fire

People travel into the wild prepared to face the worst; they do not want to encounter a deadly situation. The man in Jack London’s “To Build a Fire” went into the cold prepared for nothing, he felt that he was above nature and it could not affect him. Chris McCandless in Jon Krakauer’s “Into The Wild” went into the wild unprepared for the conditions he was about to face. As a person who read the writings of Jack London, his death seems somewhat ironic.

Don't use plagiarized sources. Get your custom essay on
“ Irony in Jack London’s To Build a Fire ”
Get custom paper
NEW! smart matching with writer

“To Build a Fire” by Jack London brings out the irony even more, we see how London wrote and how it relates to how Chris died.

Chris McCandless is a person who did not believe in rules of society. He believed that he was above rules. He even felt he could defeat nature; he went into the wild expecting to come out alive while he lived on what nature gave him. “Alaska has long been a magnet for dreamers and misfits, people who think the unsullied enormity of the Last Frontier will patch all the holes in their lives” (Krakauer, 6).

This is exactly what Chris was trying to do when he went into the Alaskan wilderness. He wanted to escape the rules and suffering he faced in society.

Jim Gallien recalled, “He wasn’t carrying anywhere near as much food and gear as you’d expect a guy to be carrying for that kind of trip” (Krakauer, 5). The man in “To Build a Fire” went to go meet his friends in the cold with nothing to protect him or keep him warm except the clothes on his back, and a dog that accompanied him.

Chris and the man both went into the wilderness underprepared for the challenges they would face. Chris read Jack London throughout his life, he knew about his stories and this is how he learned about the beauty of the Alaskan wilderness, but as he read he should have also learned of the dangers.

Even though he read these stories by Jack London he still went into the wild unprepared. Chris McCandless spent most of his life in a warm climate. He was born in California, grew up in Virginia, and went to college in Georgia. Chris has never experienced anything relatively close to the Alaskan climate. Through reading stories about people experiencing the Alaskan wilderness Chris should have learned about the dangers that people faced in the cold temperature. The man was not scared of the cold at all, he felt as if he was above it and ended up dying.

This shows the dangers of undermining the climate of the north and Chris did the same. He tried to live off of the land that was barren. The man was not concerned with “the absence of sun from the sky, the tremendous cold, and the strangeness and weirdness of it all—made no impression on the man” (London). The man in “To Build a Fire” was a representation of rational thinking, and how people in society believe mankind is more powerful than the world. This thinking was evident in Chris’s life.

He felt that he was above the laws of the government. He did what he wanted, “On December 2, he reached the Morelos Dam and the Mexican border. Worried that he would be denied entry because he was carrying no identification, he sneaked into Mexico by paddling through the dam’s open floodgates and shooting the spillway below” (Krakauer, 25). There are resemblances between the qualities of the man and Chris McCandless. Chris’s death was not ironic but the reason he died was ironic.

To Build a Fire is a story about a man who is a very rational thinker who died because he felt he was better than nature and it could not kill him, the dog he traveled with lived because it relied on instincts. Chris went into the wild with a mindset similar to this man’s mindset. This is what brought out the irony of Chris’s death, he was an avid reader of Jack London and by reading his stories he should have been able to conclude that in order to survive in this climate he needed to be more prepared for difficult situations than he was.

Irony in Jack London's To Build a Fire. (2016, Sep 20). Retrieved from http://studymoose.com/irony-in-jack-londons-to-build-a-fire-essay 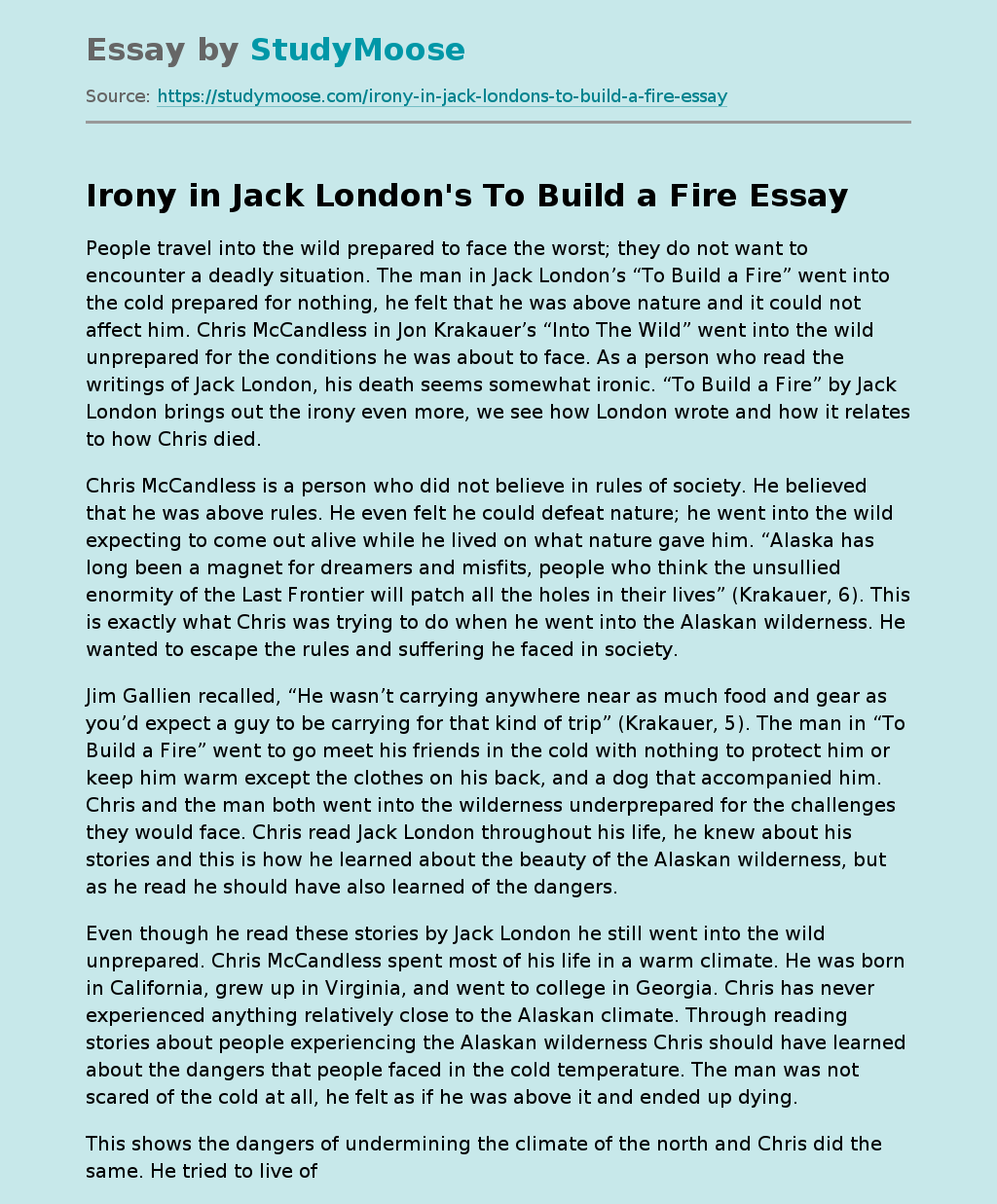