Interpersonal attraction is a human expression of strong fondness and attachment towards others. It characterizes the human need for others. It is the fulfillment of the desire for meaningful partnerships that makes people happy and feeling important. Attraction is the first thing that people feel and the first reason that start off a relationship. When people pursue this attraction towards another, they become involve in a relationship. The success and failure of the relationship will depend on the reinforcement of the initial attraction.

Don't use plagiarized sources. Get your custom essay on
“ Interpersonal Attraction, Relationship and Beauty ”
Get custom paper
NEW! smart matching with writer

The Reinforcement Affect Model is when people are drawn towards those whom they associate with good feelings. We are attracted to those who have been nice and kind to us, in the same manner that we loathe those who have done us wrong or who have not treated us well. When people equate the costs and rewards and make them the determinants of the growth of a relationship, such is called the Social Exchange Theory. When a relationship is meeting the expectations and the needs of those involved, there is a fulfillment felt and the relationship is very likely to succeed.

This is a case where the success is attributed to a positive reinforcement. The Equity Theory is also about costs and rewards a partner puts into and gets out of a relationship. This is where the contribution of one must approximate the other’s. The theory finds that inequity experienced by one must be dealt with by restoring the balance in the relationship. It is usually those who feel less benefited in the relationship who are motivated to do something to correct the inequity.

That Anxious or Ambivalent Style of Attachment is apprehensive of entering relationships out of worry that the other person might not reciprocate the feelings, owing to his experience as an infant of having had a strict and domineering care giver. The difference of the Attachment Theory is that the factors that affect or influence the relationships were built from the past unlike the other theories that suggest relationships develop from factors that are present at the moment. Proximity affects interpersonal attraction. People living close to each other are likely to develop an attachment.

There is a tendency for them to move in the same circle and see a lot of each other. The become familiar and may one day discover that they are attracted. Similarity is another factor that may lead to interpersonal attraction. Most people are attracted to those with similar traits, characteristics and interests as theirs. They will easily understand the actions and reactions of the other as they would similarly act given the same circumstances. They would enjoy each other’s company because they are likely to pursue or engage in the activities that they are both interested in.

They will have a strong rapport because the share the same values. Reciprocity influences interpersonal attraction because when there is that mutual feeling of affection, the relationship develops. They may possibly disagree on many issues but what would be important to them is that they feel the same towards each other. Physical Attractiveness, for many, is the most important influence on interpersonal attraction. The physical attributes of a person are what initially attract others to them. First encounters and first impressions count a lot for people to get to know more about others.

Often, physical beauty is that one great magnet that attracts, not only because beautiful people are nice to look at, but they are also perceived to be sociable, open and fun to be with. 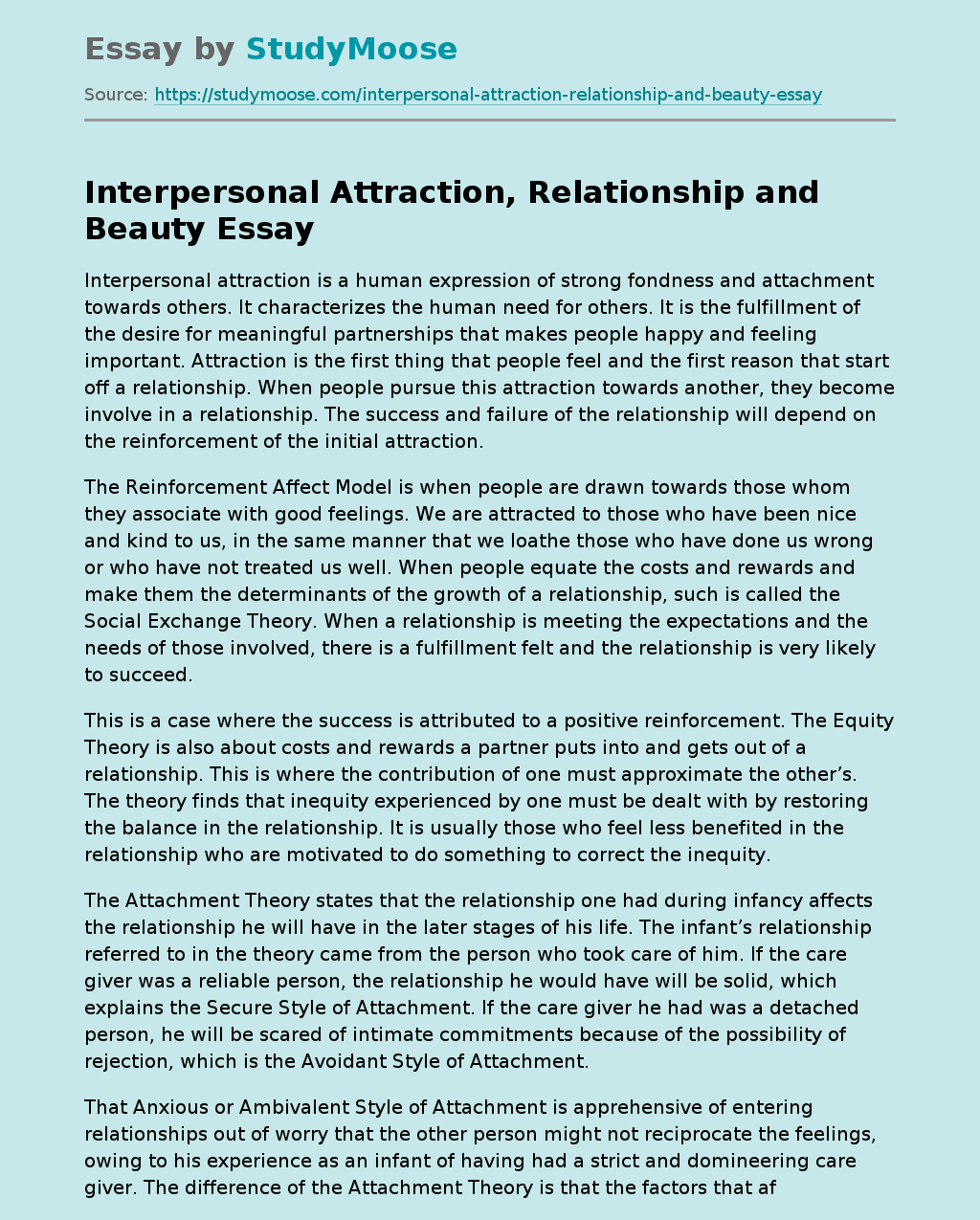