The energy costs involved in breaking chemical bonds are much higher than ones needed to overcome intermolecular forces.

Don't use plagiarized sources.
Get Your Custom Essay on Intermolecular Forces Report for Science Class Just from $13,9/Page

In order to properly differentiate between these forces, it is important to know what must be present in order for each interaction to occur.

Ion-ion forces only involve ions in mixtures of substances. Ion-ion forces can be either attractive (cation-anion) or repulsive (cation-cation/anion-anion) and the strength varies depending on charge and size. Ion-dipole forces occur in mixtures between ions and polar molecules. The anions gravitate toward positive regions of dipoles while the cations gravitate toward negative regions.

With dipoles, the strength of the forces depends upon the polarity of the molecule (or charge magnitude) and how compact the molecule is. If a molecule is more compact, there is better access to the center of charge and stronger attraction to its neighbors. Induced dipoles occur when nonpolar molecules come in the vicinity of polar or charged particles and become polar themselves. As an ion or dipole moves closer to the nonpolar molecule, a shift occurs in its electrons, throwing off its nonpolar symmetry and making it polar.

Depending on what produces this change, it will have either attractive ion-induced dipole or dipole-induced dipole forces. These may occur in pure substances or mixtures. Dipole-dipole forces may occur between the polar molecules of a pure substance, or between two different polar molecules. The positive regions of one dipole will attract the negative regions of another and vice versa. The dipoles tend to align in a way that increases the number of attractions and reduces the number of repulsions.

The strength of the force can vary with polarity: the more polar the molecules are, the more strongly they interact with each other. Hydrogen bonding is considered a special case of dipole-dipole interaction. While dipole-dipole forces are generally considered to be fairly weak, hydrogen bonding is unusually strong, especially in water. This particular type of bonding occurs when a hydrogen atom is involved in an extremely polar covalent bond, such as H-N, H-O, or H-F, and is attracted to the lone pair of a highly electronegative atom (either F, N, or O) on a separate molecule.

These may also occur in pure substances. The weakest of the intermolecular forces are the London dispersion forces. These forces occur between atoms or molecules of nonpolar substances and are present in both pure substances and mixtures. A way to predict the types of intermolecular forces present is by looking at the chemical formula, specifically whether the interacting species are polar or nonpolar. Ion-dipole forces occur between ions and polar molecules. Dipole-dipole forces (including hydrogen bonding) only occur between polar molecules.

Induced dipoles occur between polar and nonpolar molecules. If there were only nonpolar molecules, they would be London dispersion forces (but keep in mind that these forces also exist in every other kind of interaction). In the case of ion-ion forces, polarity does not matter in identifying forces, as it only involves ions and would be fairly obvious. Knowing what we do about intermolecular forces and their relative strengths, we can make a few assumptions about which forces would be present in different phases under standard conditions.

Intermolecular forces influence physical properties of each phase: gas, liquid, and solid. They can cause real gases to deviate from ideal gas behavior. They can also govern the motion of molecules; molecules in gases move constantly and randomly, they slide past each other freely in liquids, and vibrate in fixed positions in solids. The heats required to melt a solid (heat of fusion) and to vaporize a liquid (heat of vaporization) change depending on the strengths of the intermolecular forces. In liquids, water will form beads upon contact with waxed surfaces (e. . car hoods) because of the imbalance of how intermolecular forces act upon surface molecules and the symmetrical distribution of forces experienced by interior molecules. 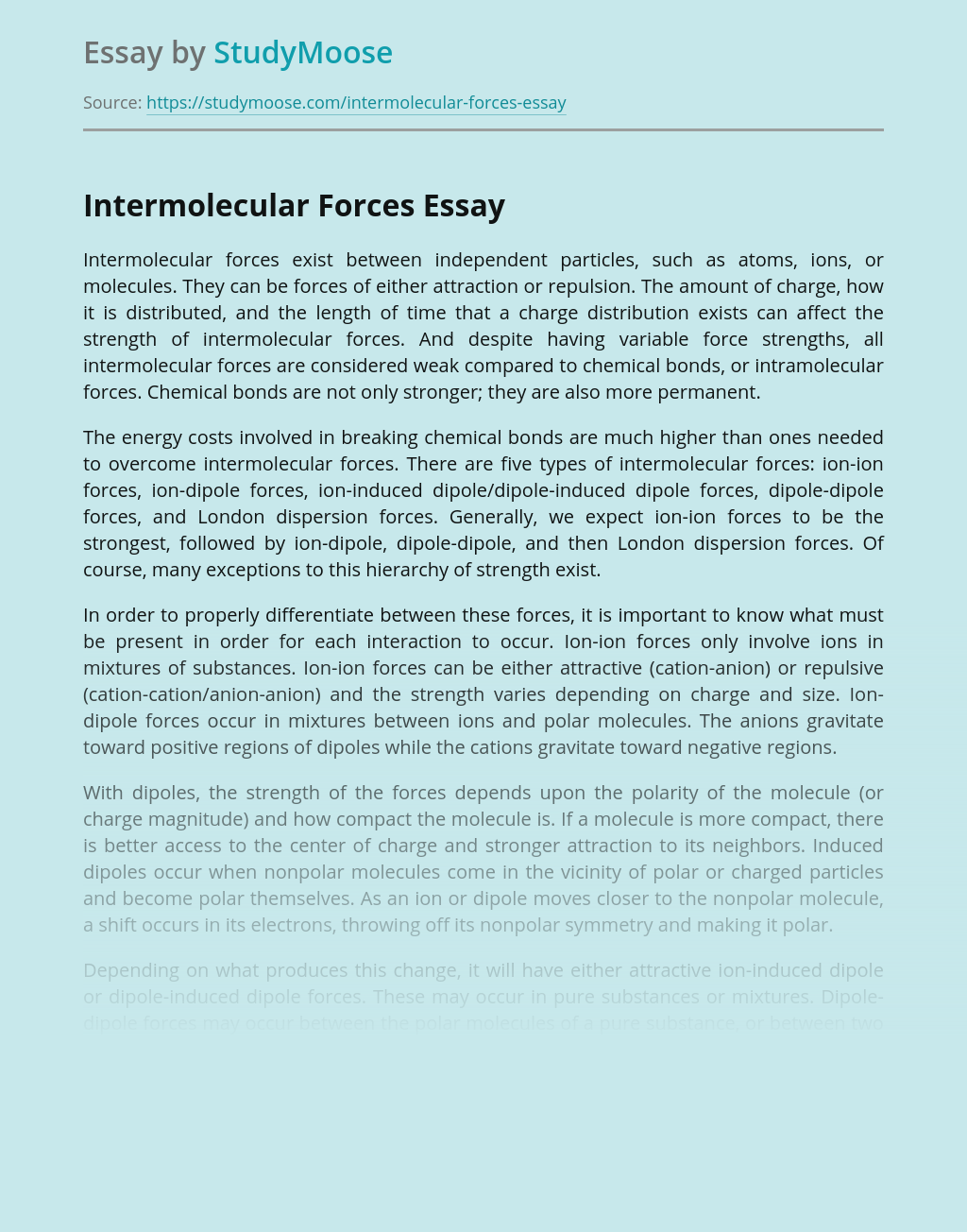 Did you observer any chemical changes in this experiment? Yes What evidence did you use to decide that something was a chemical change? I observed during the application of the hydrochloric acid to some of the substances bubbling, and smoking Give at least two examples of chemical changes you observed. Green changed from blue to...

1. NaOH is a very corrosive chemical and contact with it can cause burns to body tissue and possible eye damage. Can irriate the lungs and can cause permanent lung damage. also contact with water can generate enought heat to ignite combustibles. 2. In your own words, briefly explain the terms below. Copied answers will...

Purpose: During this experiment, we were trying to see whether copper, after a chain of chemical reactions, will revert back to its elemental form. Procedure: First, I added nitric acid with copper in a beaker, which turned into a copper nitrate, a blue-green solution. Afterwards, I added sodium hydroxide, and my solution colored to a...

Much can be learned from studying an organisms DNA. The first step to doing this is extracting DNA from cells. In this experiment, you will isolate DNA from the cells of fruit. Materials (1) 10 mL Graduated Cylinder(2) 100 mL Beakers15 cm Cheesecloth1 Resealable Bag1 Rubber Band (Large. Contains latex pleasewear gloves when handling if...

The study is entitled Combined solution of Garlic (Allium sativum) and Lemongrass (Cymbopogon citratus). Specifically, it sought to find out how these two solutions (lemongrass and garlic) can effectively kill mosquitoes. It aimed at looking for an organic and safe measure in treating the abundance of mosquito. Ideally, the researcher’s study promotes a tandem between...