The paper titled ‘Interaction between Efficiency Wage and Insider Outsider Theories’ written by Assar Lindbeck and Dennis J Snower aim to explain why wage may be set above the market clearing level. It compares the two involuntary unemployment theories namely The Efficiency Wage Theory and The Insider Outsider Model and analyses why firms lack incentive for underbidding in the context of involuntary unemployment.In Efficiency Wage Theory where wage is set above the market clearing level in order to increase the productivity of the laborers or reduce cost associated with turnover cost in industries where the cost of replacing labor is high.

Don't use plagiarized sources. Get your custom essay on
“ Interaction between Efficiency Wage and Insider Outsider Theories ”
Get custom paper
NEW! smart matching with writer

Here the firms have imperfect information about the profitability of employees thus they use their wage offers as a screening device for employees’ profitability. A high wage raises marginal when wages are set at profit maximizing level aggregate labor demand may fall short of supply and involuntary employment may rise.

In Insider Outsider Theory unemployment arises due to the labor turnover cost and ability of the insider to influence their wages without taking full account of the interest of the entrants.

Their market power arises from the turnover cost which allows them to raise wage above minimum level required to induce workers to become entrants. So aggregate labor supply exceeds labor demand. This rent seeking activity of insiders rob firms and entrants the incentive to engage in underbidding.Both theories are based on different foundations. When Efficiency Wage Theory explains unemployment through imperfect information about production and cost of their employees, Insider Outsider does that through insider’s market power.

Both these theories compete with each other but are not mutually exclusive.

They deal with employees who capture economic rent from being employed but their wages are not underbid by the involuntary unemployed workers. In Efficiency Wage Theory wages are set by manipulating turnover cost under imperfect information, and in Insider Outsider Model turnover cost gives insiders market power which drives wages above their market clearing levels.The paper also tries to examine to what degrees firms willingness to give into insiders wage demand depends on how responsive worker productivity is to wage increase. That is if the increased wage has a large effect on productivity will the negotiated wage be sensitive to insiders bargaining strength and magnitude of labor turn over cost.

It is a wage determination model including features of both Efficiency Wage Theory and Insider Outsider Model. A firm produces a nondurable homogeneous good (q) by means of homogeneous labor input (n), e’ be productivity coefficient that denote average effort and skill level of firm’s workforce.

Let the production function of the firm be Cobb Douglas:

q = A. ( n ” e )±A, ± are positive constants.Since productivity of the individual worker can’t be directly measured by the efficiency theory it uses real wage (w) as a screening device for e .

The relation is e = wІ І is a constant and will be called productivity responsiveness coefficientSuppose firms face real cost f’ per insider fixed real cost h per entrant hired.

Firms real profit is = A.n±.w±І-w.n-f.(m-n)-h. (n-m)M= size of firm’s insider workforce F >0 for m>nF>0 for n>mReal wage (w) will be the outcome of bargain between firm and each of it’s insider. A(w) be the bargaining objective of insider and B(w) be that of the firm. Then real wage will be the solution for the following problem.

Maximize ” = Aµ – B1-µFirst order condition for solution is µ·1-µ.A=-Aw·Bw.B Since Aw<0 and Bw>0 this means the the value of the firms objective A is positively related to the value of the insiders objective(A) with the relation depending on relative bargaining strength and responsiveness of the two objectives to wage.

Insiders assume to maximize their utility surplus and the wage bargaining power is assumed to be individualistic. So the aim of the firm is the maximization of the profit surplus generated by the insider . The profit generated by the insider under agreement is exogeneously given in the bargaining process. And profit under disagreement depends negatively on turnover cost =G(f,h) Thus the profit surplus is B = a.wІ “w “G(f,h)

These wage setting function provide basis for checking whether the efficiency wage and insider outsider model reinforce or weaken one another.

Thus we come to the conclusion that both the theories do not reinforce each other and when І increase the negotiated wage becomes less. That is firm becomes less willing to give into insider’s wage demands , the more responsive productivity is to wage. So the firms compensate for the influence of insider power. Greater the insider’s relative bargaining strength the less incentive they have to drive up the wage due to efficiency wage consideration. 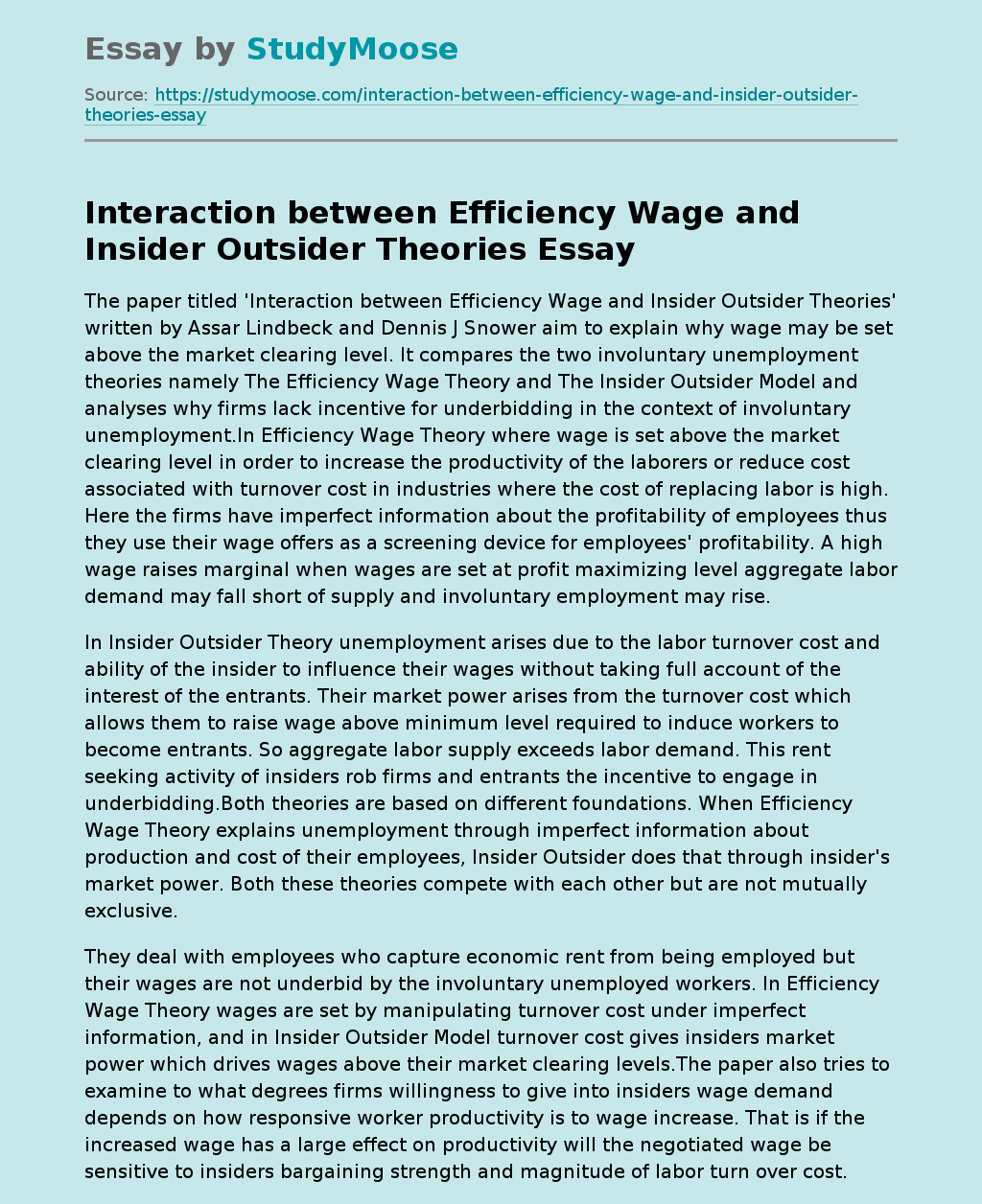