1. What is the difference between a threat agent and a threat? A threat agent is the facilitator of an attack however; a threat is a constant danger to an asset. 2. What is the difference between vulnerability and exposure? The differences are: vulnerability is a fault within the system, such as software package flaws, unlocked doors or an unprotected system port. It leaves things open to an attack or damage. Exposure is a single instance when a system is open to damage.

Don't use plagiarized sources.
Get Your Custom Essay on Information Security Just from $13,9/Page

Vulnerabilities can in turn be the cause of exposure. 3. How is infrastructure protection (assuring the security of utility services) related to information security?

Confidentiality: Information’s should only be accessible to its intended recipients. Integrity: Information arrive the same as it was sent. Availability: Information should be available to those authorized to use it. 6. If the C.I.A. triangle is incomplete, why is it so commonly used in security? The CIA triangle is still used because it addresses the major concerns with the vulnerability of information systems. It contains three major characteristic confidentiality, integrity and availability which are important even today. 7. Describe the critical characteristics of information. How are they used in the study of computer security?

The critical characteristics of information are:
Confidentiality-preventing disclosure to unauthorized individuals
Accuracy-free form errors; Utility-has a value for some purpose; Authenticity-genuine and Possession-ownership. 8. Identify the six components of an information system. Which are most directly affected by the study of computer security? Which are most commonly associated with its study?

The six components are: Software, Hardware, Data, People, Procedures, and network. If there is a flaw or oversight in any of category it could lead to exposure and or vulnerabilities. The components most associated with the study of information security are: hardware and software when it views as science also people when it view as social science. 9. What system is the father of almost all modern multiuser systems?

A formal methodology ensures a rigorous process and avoids missing steps. 13. Which members of an organization are involved in the security system development life cycle? Who leads the process?

14. How can the practice of information security be described as both an art and a science? How does security as a social science influence its practice?
Information security can be described in Art because there are no hard and fast rules especially with users and policy. Also, it can be describe in Science because the software is developed by computer scientists and engineers. Faults are a precise interaction of hardware and software that can be fixed given enough time. 15. Who is ultimately responsible for the security of information in the organization?

The Chief Information Security Officer (CISO)
16. What is the relationship between the MULTICS project and the early development of computer security? It was the first and operating system created with security as its primary goal. Shortly after the restructuring of MULTICS, several key engineers started working on UNIX which did not require the same level of security. 17. How has computer security evolved into modern information security?

In the early days before ARPANET machines were only physically secured. After ARPANET it was realized that this was just one component. 18. What was important about Rand Report R-609? RR609 was the first widely recognized published document to identify the role of management and policy issues in computer security. 19. Who decides how and when data in an organization will be used or controlled? Who is responsible for seeing that these wishes are carried out? Control and use of data in the Data owners are responsible for how and when data will be used, Data users are working with the data in their daily jobs. 20. Who should lead a security team? Should the approach to security be more managerial or technical?

A project manager with information security technical skills lead the team. The approach to security should be managerial, top down. 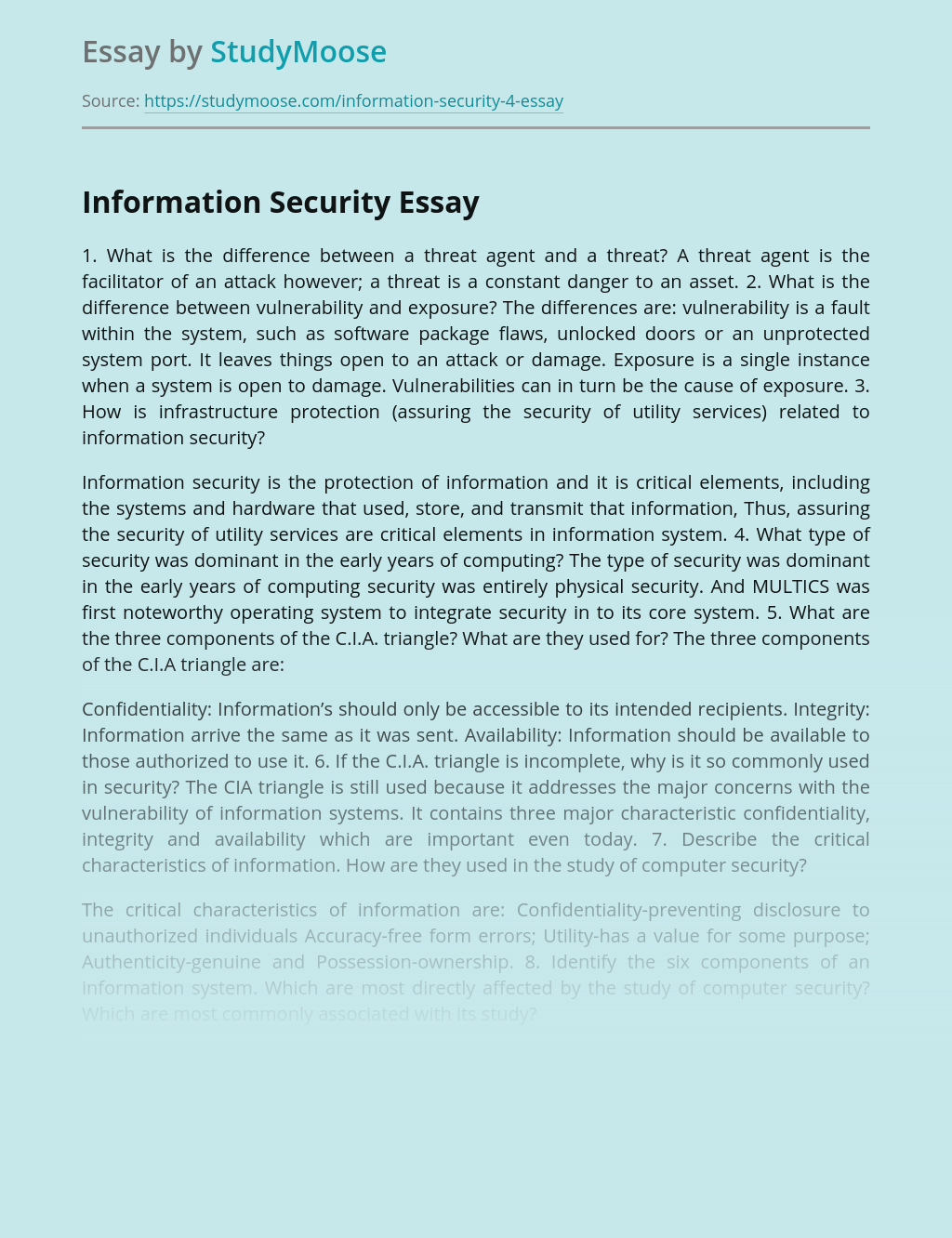 1. (10%) State the problem the paper is attempting to resolve. This paper is trying to demonstrate how Airavat, a MapReduce-based system for dispersed calculations provides end-to-end confidentiality, stability, and privacy guarantees utilizing a combination of mandatory access control and differential personal privacy which offers security and privacy assurances against data leak. 2. (20%) State... VIEW ESSAY

Shoplifting is a huge issue in America. Shoplifting impacts more than the offender. It overburdens the cops and the courts, includes to a store’s security expenditures, costs consumers more for goods, expenses communities lost dollars in sales taxes and injures children and families. Not all shoplifters are the very same, there are two unique types.... VIEW ESSAY

Our team will be describing three of our member’s current places of employment. Those organizations are Rex Communications & Public Relations Inc., Farmers Insurance Group Federal Credit Union, and Advanced Security Concepts. Analyzing the organizational structure types and their pros and cons for each, to determine whether or not they are affective. Rex Communications &... VIEW ESSAY

The article aims at bringing the important issue of Human Security to the forefront. It focuses on the urgent need to understand the concept of human security, and to develop the proposals for translating these ideas into policy practice. An attempt has been made to clarify and correlate the terms ‘human development’ and ‘human security’.... VIEW ESSAY