There are many forms of visual entertainment readily accessible to us; it has become the primary source of entertainment. Visual entertainment only has not helped shape American culture but also its values. Visual entertainment comes in many forms; whether it is reading a newspaper, magazines, or just watching television. Visual media has many numerous advantages as well as some disadvantages. Advisements are used to target individuals that find their product appealing. This compels viewers to buy the latest technology gadget or to wear the latest fashion clothes.

Don't use plagiarized sources. Get your custom essay on
“ Influences of Visual Media Paper ”
Get custom paper
NEW! smart matching with writer

Media has also changed the way we communicate and this has improved our culture in many ways.

For example, in the recent years it has been possible to connect on real time with someone across the world through a computer. Now we are able to connect with people through a simple device like the IPhone 4S. The IPhone 4S lets a person talk through face time and allows them to see each other. Visual media has also made a huge impact on young children and teenagers.

The music industry has changed media forever. Artists have introduced us to many different cultures and their music as well. Artist like Lady gaga have paved the road for young adults not to be afraid to speak up or reach high for their dreams.

Beyoncé has also paved the road for woman all over the world to feel empowered by their femininity and stand strong.

Centuries ago women could not freely express themselves the way they do now. In addition, this has helped shaped a new lifestyle for many of us. The media provides full coverage of the lavish life styles of the many celebrities we have in this generation. People have lost the value of simple things in life and try grasp for the lavish life. In Addition, visual media also informs us of the news around the world. The news teaches us about the different cultures and that has impacted our culture tremendously. Visual media continues to change every day; there is always something new and updated coming out.

Visual entertainment has had many positive and negative social influences. One way that visual media influenced our culture in a negative way is by blind imitation. The media portrays an image for the viewers on how a rich and glamorous life is the way to live. Several people are so blinded by this that they try their best to live lavishing lives without having means to. For example, Heidi Montag is a celebrity who became popular after completing her first real life show called Laguna Hills. She became caught up in glamorous life that she eventually wanted more fame. She then decided she wanted to look like Barbie and had 10 plastic surgeries in just one day! Fox news wrote an article about Heidi Montag and what appeared to be her addiction to plastic surgery.

In an Internet video, Fox News (2010) states that “When reality TV show star Heidi Montag announced last week that she had undergone 10 plastic surgeries, all in one day, the news was met with some (naturally) raised eyebrows. But she’s not alone in her obsession to look perfect by enduring multiple cosmetic enhancements, a phenomenon that has the makings of an addiction, or at least a binge behavior, experts say.” The media often sends messages to their viewers that skinny, resembling a celebrity, and living a luxurious lifestyle is the way to live.

The media also promotes unhealthy lifestyles such changing you’re eating habits to become thinner. Another negative social influence caused by social media is media addiction. Several people become addicted to visual media. Many people are now glued to their television, reading celebrity gossip, or just surfing for hours. This influences especially teenagers who might come across information that they are not able to understand in that age. Visual media also overwhelms its viewers with information that might now possibly be truthful. Not too many people spend the necessary time to find out if that information is authentic.

This is how many of us become influence by visual media. We believe everything that is shown on television or put on the Internet. However, visual media does have its positive social influences. Mass media can help you reach many people across the world. We are now able to face time chat online with a family member in New York while you are in California. Visual media keeps us informed of global news as well as local news. Visual media has also made it possible for some individuals to work from home. For example, people that work from home are now able to have conference face time calls online. Visual media has also made it possible for people like me to go to school online and obtain a degree.

In conclusion, visual media reflects and influences social behavior and attitudes. People become influenced by what the media’s message is and it influences their behavior and attitudes. Visual media sometimes influence violence as well as kindness. We see on television many tragic stories that broadcast uncensored for the viewers to see. However, the media also broadcasts the help people volunteer when there is a tragedy.

The media influences people behaviors and attitudes by portraying different images. For example, if you are watching a love story on television you will automatically think that people do act like that in real life. Whether it is Twilight or True blood the media gathers people watching these series and that influences people’s behaviors at that moment. Visual media has helped us understand the various cultures as well as religions around the world. This helps us understand and respect others, we are all not the same, but we are equal. 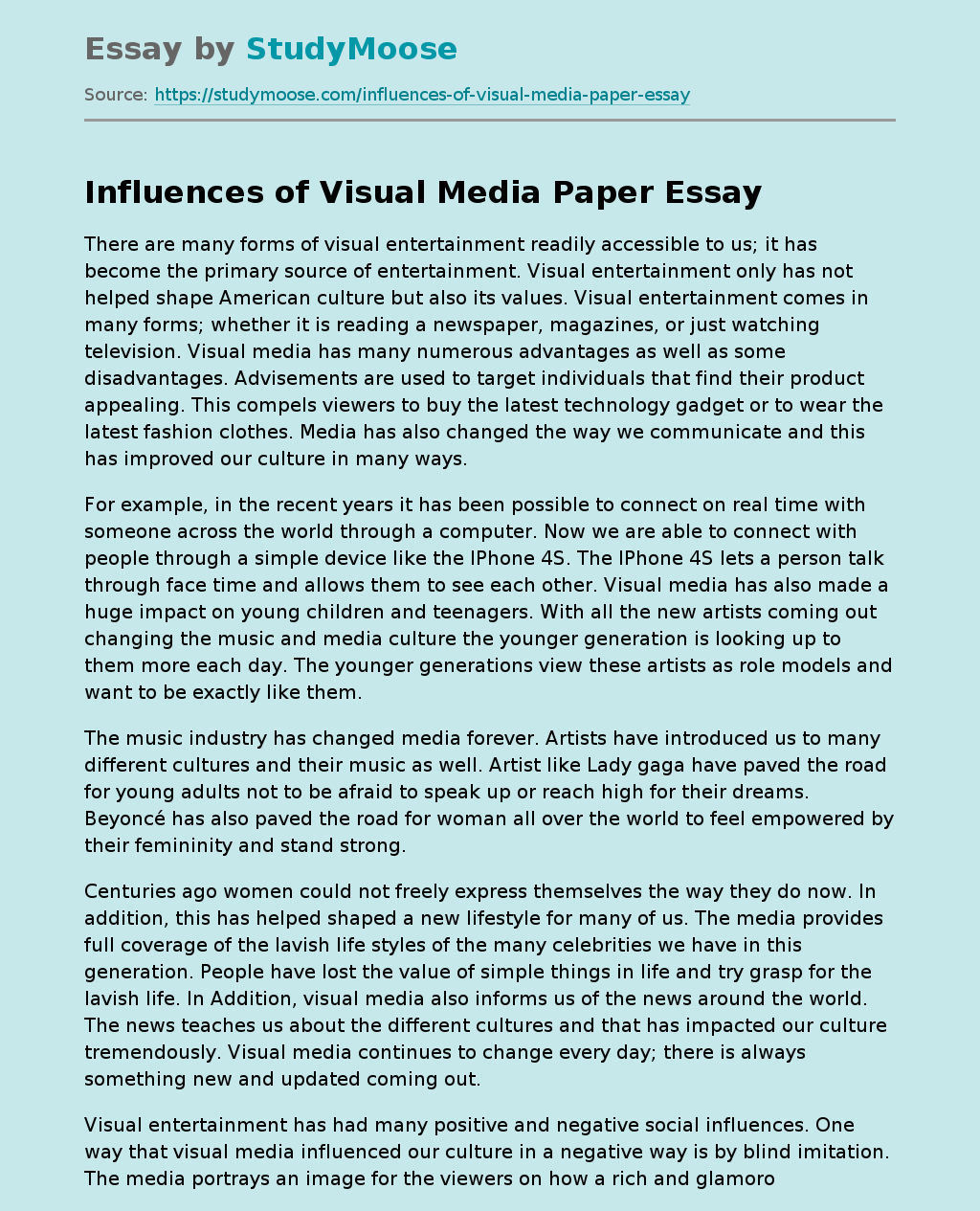