In Praise Of The F Word by Mary Sherry

According to, In Praise of the F Word, by Mary Sherry tens of thousands will graduate high school with meaningless diplomas. Those with meaningless diplomas are the ones who’s been passing along even though they don’t truly understand the materials taught to them. Sherry argues that our educational system is to blame for cheating those students out of a proper education; however, an easy remedy is for teachers to use the trump card of failure. Sherry claims that before students can concentrate, the teacher needs to get their attention first.

I agree with Sherry that it’s unfair to those student cheated by our educational system but her trump card of failure doesn’t solve the problem. Instead, it feels more like a threat to the student than a motivation. Her method is incompatible for all students because all student are different and it takes a teacher’s involvement to understand, not a teacher’s threat. Sherry used blame the student’s lack of concentration to the class but instead she now blames the failure to get the student’s attention.

No matter what distraction are at hand for the student, the teacher needs to get the student’s attention first. Sherry states that there are many ways to do this depending on the teaching style but one sure way is the trump card of failure. She points out an example of her son who was lacking attention in class and then received the trump card of failure. It resulted in her son finishing the semester with an A.

I feel like Sherry’s argument is incomplete. She doesn’t acknowledge that all students are different, and that some come from a more rugged background than others.

Different students need to be treated differently, so one method will not work on all students. For example, there are students that plainly do not understand the material taught to them so instead they make excuses. Teachers will see the student’s excuse as a lack of attention and fail that student but instead all that student needs is a bit of guidance. Sherry’s method will not work for students that are afraid to ask for help. Furthermore, the threat will not help the student but give the doubt in their abilities. A tool for motivation turns into a tool for discouragement.

Instead of facing the challenge head on with the help of the teacher, the students are left alone with the threat ringing in their ears. Students that can’t take the pressure eventually drop out, students that can just keep to themselves and barely passing by. I admit that Sherry brings up a good point; In order for a student to succeed in school, they first need to be attentive. Teachers need to find way to get the student’s attention but Sherry’s one all be all way will not help the teacher nor the students. Sherry implies that students perceive education as less important compared to their adult counterparts. no matter what environments they come from” students will not put school as a top priority on their list.

Her argument was that for adults, even with complications in life i. e. unemployment, drug, abusive relationship, still make an effort towards higher education. Sherry states that compared to the adults, students rather be carefree while on cruise control through school. I wholeheartedly agree with Sherry that students would rather have a fun stress free school life instead of a prison, but I have a problem with her implications of a “terrible environments.

Sherry hints that environments does not affect a student’s involvement in school but i think she’s severely inaccurate. Where a student come from, i. e. his life’s background, greatly affect what kind of person that student will turn out to be. For example, a student can come from a background that greatly values education; at the same time, another student can come from a background that could care significantly less about education. Not everyone is molded the same, there are students that are eager to learn, while there are also students that would refuse the help of a teacher.

Sherry claims that the threat of flunking can be used as a positive teaching tool; a show of confidence by the teacher and parent to the student. However, She also completely fails to specify why students fail in the first place. There are students who doesn’t value education because of their unsupportive parents. Sherry’s son might be an inaccurate example because not all students have an english teacher as a parent. My friend Hao is a perfect example. Hao and I were best friends in middle school and freshmen year high school.

His parents are always working so he’s exceedingly relaxed towards school. Everytime I hang out with him he’s either playing video games or watching movies. Eventually the lack of care for school caught up with him and he was held back for another freshman year. We try to keep in touch but our friendship grew apart because we aren’t in the same grade anymore. Sometime we would go weeks without seeing each other and the intervals just got longer each time. The times I do see him, I can tell he’s miserable.

He dropped out without telling me and to this day I still wonder if I encouraged him alittle more about school, maybe he would’ve graduated with me. To my friend, Hao, school was just not important to him and even a threat of failure will not convince him otherwise. In his world, games were more important and school is just a nuisance. He was never taught the true value of an education by his parents. I know he’s not alone and there are many students like him. Although their world might not be gaming, it could be something else like friends, drugs, intercourse, etc.

Sherry’s trump card of failure would of failed them, instead they need support not threats. While Sherry may claim that the success of the trump card of failure in the past. I would like to point out that things are forgotten for a reason. In this care the trump card of failure is deemed ineffective against the youths of today. Her method of teachers using threats against students for their attention will not help but damage. Everyone is unique and teachers need to deploy unique tactics to encourage students. A word of threat can only get so far, but the consequence greatly outweighs the worth.

In Praise Of The F Word by Mary Sherry. (2016, Nov 18). Retrieved from http://studymoose.com/in-praise-of-the-f-word-by-mary-sherry-essay 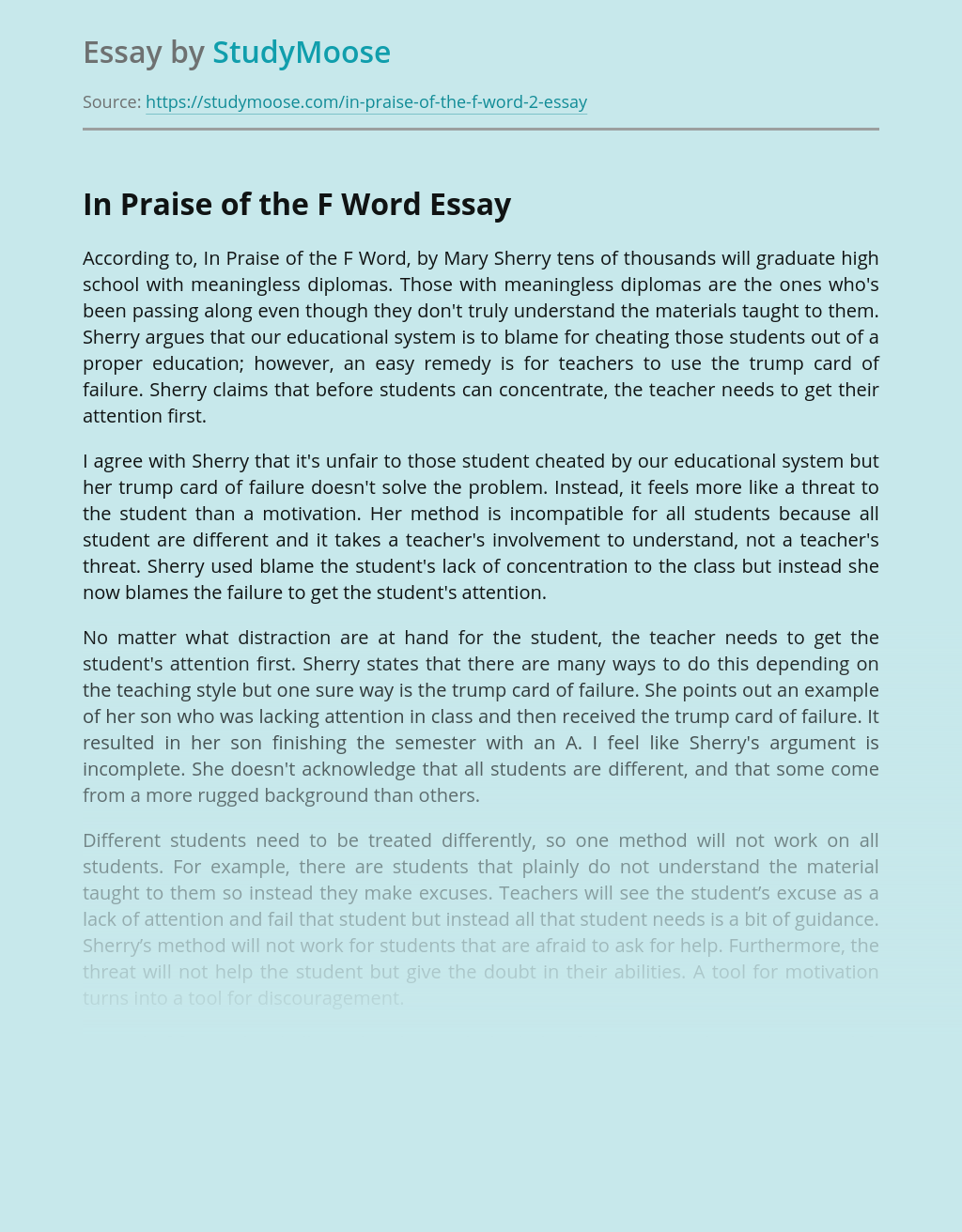 Don’t waste time
Get a verified expert to help you with In Praise Of The F Word by Mary Sherry
Hire verified expert
$35.80 for a 2-page paper
Stay Safe, Stay Original