Importance Of The Different Views By William Faulkner

Don't use plagiarized sources. Get your custom essay on
“ Importance Of The Different Views By William Faulkner ”
Get custom paper
NEW! smart matching with writer

Dewey Dell epitomizes the struggles women of this time would go through, as they are objectified and controlled by the dominant male society of the era. The scene in which she becomes pregnant exemplifies the idea that women are controlled by men. Lafe is determined to fulfill their agreement and picks cotton into Dewey Dell’s basket. This results in her basket being full and the pair having to fulfill the agreement in which they have sex and she ends up pregnant.

Though Dewey Dell tries to resist this consequence through her own inaction, she is controlled by the more powerful force of the male gender and must abide to the agreement. In the novel, Faulkner uses character’s like Cora to represent his satire of the excessively conservative, empty, and thoughtless demeanor of the standard for southern rural women at the time. By portraying Cora as doltish, and very superficial, Faulkner makes the reader immediately dislike Cora’s condescending and almost ridiculous attitude.

She has complete blind allegiance to the values of her time, whether that be to her Christian religion, or to her undying loyalty to her social role as an obedient wife. By Faulkner making such an unlikeable character preach and venerate the social codes for women at the time, he forces us to relate those codes to our general perception of the character preaching them. Because Cora is such a dimwitted character, we relate the societal rules that she is defined by to stupidity, and blindness. Faulkner incorporates Addie into the story to challenge American Social beliefs on many levels, as she breaks masculine social laws in a myriad of ways. For one, she is depicted as sexually independent. Also, she rejects completely the very engrained idea that a woman should be satisfied by her husband and her kids, and is on numerous occasions depicted as isolated and unsettled. Faulkner understood that the ideas of strictly ethical woman were simply a way to distract women from real societal mobility. He understood this as something the masculine order created in order to appease actual and effective change by women. By showing Addie’s desires, he completely rejects these past givens.

Anse’s misogynist ideas are apparent throughout the novel. Anse has this mindset that women are to be used, abused, and then recycled because he has his plans and it does not matter which woman is there to help him do it. Anse also shows his belief that women are replaceable by burying Addie and then immediately getting married to a woman he had just met. The woman he marries at the end of the novel could not have known him for longer than a few hours. This shows that Anse isn’t looking for beauty or intelligence or a personality. He wants a woman that he can dominate and use until she’s worn out and he has to find another one. Whitfield’s only narration in the book is filled with hypocrisy. He is a holy man that committed a lustful sin, yet it took him years to build up the courage to go apologize to Anse when he should really be apologizing to both Anse and Addie. He left Addie to raise Jewel all by herself and then thinks he has the power to decide when it is right to own up to his sin. His character shows another facet of twisted Christian morals and ideologies in As I Lay Dying which is also shown through Cora’s abuse of religion. He does not care what Addie feels but thinks only of himself and how his guilt will affect his after life when he is judged by God.

Importance Of The Different Views By William Faulkner. (2021, Nov 23). Retrieved from https://studymoose.com/importance-of-the-different-views-by-william-faulkner-essay 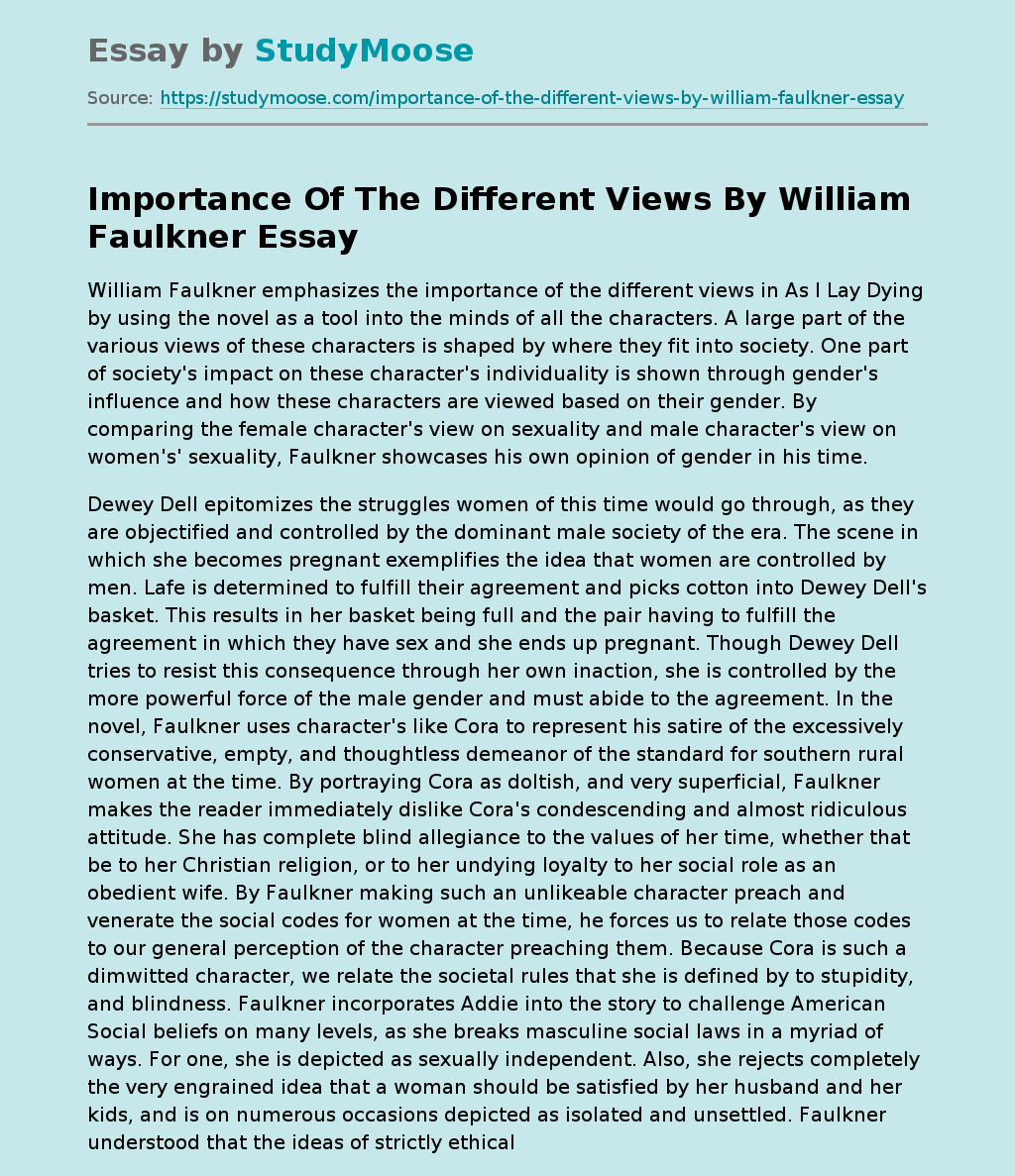