Importance of Partnerships as a Kind of Relationships

The term partnership entails the joining of two entities or corporations of people or organizations with the unique intention of achieving much better results of the intended goals through combination of effort and other related resources. Indeed the general perception of partnership has evolved as a very central theme in the field of policy making since other fields such as social care, health matters, environment, urban generals, fighting and combating crime and terrorism, performing criminal activities and biotechnology continues to embrace partnership (Ling 2002, pp.

Don't use plagiarized sources. Get your custom essay on
“ Importance of Partnerships as a Kind of Relationships ”
Get custom paper
NEW! smart matching with writer

Partnership is also highlighted in the modernization of the various social services in Europe and in other parts of the world (Miller & Ahmad 2000). Various issues relate to the concept of partnership. The diversity in the nature of partnerships being formed all over the world requires special attention to be accorded to a number of central issues in the partnership relationships. The major advantages of forming partnership, the challenges that relate to this kind of relationship and the best way in which the partnerships would best be dissolved have been addressed in this paper.

However, the continued lack of a definite definition of partnership has made it have a lot of ambiguity in a number of sectors. According to Nicolus (2003), such an approach is mainly with reference to the relationship that should be natured in such a relationship (Miller & Ahmad 2000; Solidarity with the Women, 1990). Partnership and Mother Care Due to the complex nature of partnerships, the relationship between partners and that of the child and the mother is best done to define the term and to ensure utmost relationship between the partners best understood to fully suit the market need in business and other spheres of life.

The nature and history of early partnership help understand a number of issues that relate to the relationship between the partners. This is indeed best explained by the concept of the Early Years of Development and the various existing Child Car Partnerships in the world (EYDCP). These critically help to analyze the actual partnerships that are in actual existence (Powell 2009). The inadequate concepts developed on the working of the partnerships and the arguments on whether or not EYDCPs actually work and the overall meaning raises a number of concerns.

The origin of partnership is not necessary based on the business conceptualizations that target to ensure efficient and effective utilization of resources. However, the need to win wars based either on countries, similar interest or to increase territorial boundaries and powers made the need to corporate and work in groups inevitable. Partnership is therefore not a criticism for differentiation (Maddock 2000). It is engraved in the response for fragmentation recognizes the differentiation and lack of compensation based on well understood relationship structures.

The potentiality of the collaborators partners in a relationship assumes a natural perspective. In the mother – child relationship, it is almost automatic that the two depend on one another for a number of things which need to be satisfied if the relationship has to grow and become much stronger with time. Initially, one of the partners says the mother mainly benefits the child through breast feeding and offering security (McLaughlin 2008, pp. 82-101). However, as time progresses, the relationship become mutual and the child starts benefiting the mother through the assistance in performing various tasks.

In a partnership, it is therefore very evident that knowledge, ideas and other necessary resources are exchanged based on the mutual agreement that may also be based on the pre-set rules and regulations. Partnerships offer partners the desired chance to influence one another and where possibly behave in as if they were one entity. The behaviors are in normally in ways in which the actions can if possible become more aligned thus allowing partners to fully or partially attain their own goals and those of the partnership in the most economical and cost effective manner.

EYDCPs could therefore be described as a compulsory partnership based on the nature of its operation and structure of distribution of powers and other resources. In the research carried out on EYDCP nature of operation and other related matters, it is evident that the local authority education system staff had the view that its inactive and dormant members should be disqualified from the partnership (Ling 2002; Lossky & Stransky 2002).

This explains the fact that even from the traditional strategic cooperation point of view, the need to maintain constant consultation, sharing of information and other resources is very fundamental in any form of partnership all over the world. If that does not happen, then the continuity of the relationship becomes either technically possible or redundant hence the need to terminate the relationship. It is evident that traditionally, some partnerships have been purely based on the resolution of conflicts and ensuring that peace, stability and cohesiveness thrives.

In some partnership relationships, the whole partnership is normally about various conflicts of interest, regarding the partner’s who gets the money first, who bears largest losses and the manner in which authority is controlled. Partnership Definition and Its Nature The nature of partnership carried out depends on a number of factors. Partnership is the union of people or business entities with an intention of performing certain tasks and achieving certain designed tasks within a given time frame using certain amount of resources.

The control of funding of the partnership and the overall control of partnership relationships depends on the manner in which the partnership can be exploited. The major requirements for partnership membership, its core target s, nature of control and ensuring setting up and enhancing monitoring various bodies delegated with the duty to do so is very fundamental (Ling 2000). In organizations which are supported by cash resources, a lot of strict regulations and constant adherence to the regulations is of paramount importance.

In the modern partnership relationships, voluntary organizations may even be co-opted and the boundaries between voluntary and statutory activity become redrawn in line with government direction. Partnership working is one way in which the state normally retains and in some way its power over other sectors including the voluntary sector. Partnership Relationships in Reference to Relationship of Dealing with Children Children deserve to be given a lot of attention when dealing with.

A lot of caution in terms of the tone used when talking to them, the manner in which their problems are solved and the general cool friendly attention they should be accorded is important. This is however a true reflection of how most partnership relationships should be carried out (Gatrell 2002). Listening to children and adequately addressing their issues prepare them for their future lives in which they become better placed to corporate with other people in their future lives.

Indeed listening to children also produce better decisions are their various stages of life (Kilm 1997). Even though evidence to prove this argument is very limited in most life sources, it can be argued that habits developed in the early stages of life normally result into the molding of the final products o the mature being with good virtues thus being able to fully adhere to the societal norms. It is generally accepted in life that decisions normally best used by people based on the general knowledge and opinions of those affected and the environment in which they live in.

In some instances, the requirements for children also reflect the needs of the partnership in a partnership set-up (Glendinning & Rummery 2008, pp. 133-137; Joseph & Phillips 2001). This explains the reason why in some partnerships, there are always very strong assumptions made in reference to children; that young people’s views cannot easily be ascertained independently with total disregard of their adults who in most cases are better placed to understand better a number of issues.

The healthy being of children and poverty and the social exclusion of children also determine the manner in which children would grow to become responsive potential partners. It is so far evident that even though the outward nature of partnerships is commonly viewed positively, partnership has a lot of downfall which need a lot of attention when initiating the partnership plans. The British government has a clear understanding of the various partnership needs.

According to the department of education and employment (1999) the recent policy developments have also put a frame to the definition of partnership with great reference to the attainment of the set goals rather than the general processes followed in formulating the partnership agreements and working procedures. This is also in reference to the modalities of partnership working which should be very clear and easily understood by all partners (Edmund 2007; Gatrell 2002). Areas Where Partnership is Very Crucial The practice of partnership is very crucial in a number of sectors.

This practice, even though very important in a number of areas, has proved to be more fundamental in some fields than in others (Denzin 2003). This could be in corporation with from various sectors. The continued needs for corporation in a number of fields elicit the need for adequate analysis in determining the conditions necessary for the partnership. Partnership success is charged in various organizations by the ability of attaining certain set goals. In different organizations, the total outcome and profitability value, collaboration nature, the social and health care programs is very crucial in the success of partnerships.

Hospitals and other health sectors are one of the areas in life where partnership is of great importance. In the health care, provision of some medical services is very expensive and some medical units are not better placed to offer certain services. Recruitment and employment of medical staff on a permanent basis is also sometime very costly. Surgeons for instance are also very expensive to employ on a permanent basis. This calls for the need to partner with other medical services and hospitals so as to hire these personnel when need arises (Craig & Taylor 2002).

Denzin (1998) believes that a partnership is very fundamental, sensitive and thus the need to keep a close watch on the issues related to the relationships. Research in the medical field on the medication of some diseases is normally carried out in partnership with other medical organizations in order to ensure faster discovery of the medical treatment for certain diseases. Hospitals that venture in the provision of sensitive services and medical-care require that partnership be enhanced. This ensures sharing of sensitive information and research results.

The partnership that enhances the general reduction of operational costs in the health sector that resulting in the overall reduction of the cost of medical services. Moreover, banking industry, security departments and most transport sectors such as airlines participate in partnerships (Clarke & Glendinning 2002). The partnerships, like in the medical industry, ensures that sensitive yet very vital information is exchanged to also to man and adequately address challenges related to their sector.

Importance of Partnerships as a Kind of Relationships. (2016, Sep 25). Retrieved from https://studymoose.com/importance-of-partnerships-as-a-kind-of-relationships-essay 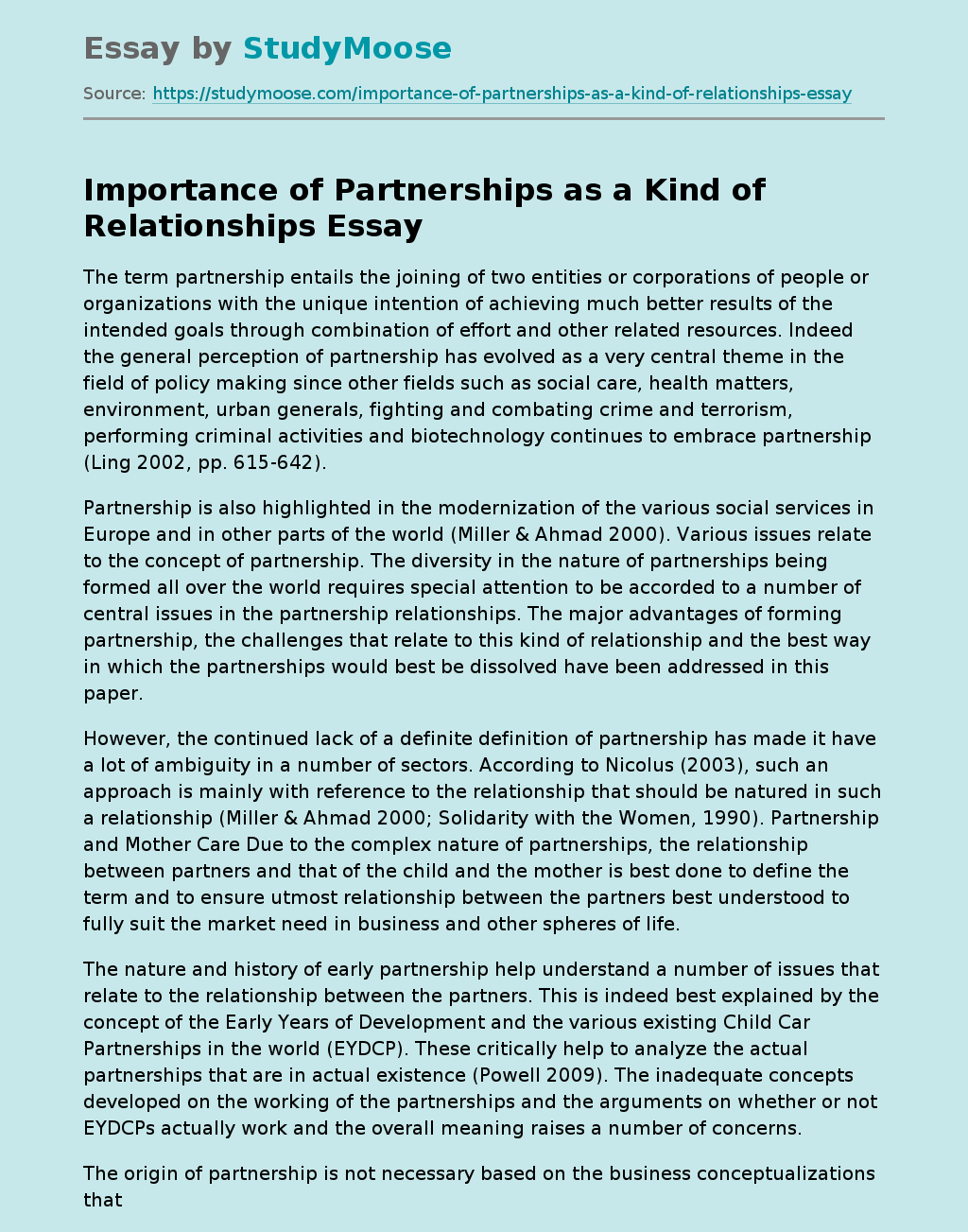