Canny Gabriel Castle Advertising Pty Ltd & Anor v Volume Sales (Finance) Pty Ltd (1974) => this case suggests that the emphasis which is to be placed on the continuity of “business” is not heavy to a point of absolute decision. Our conclusion that the joint venture was a partnership, from which the parties anticipated profits and provided that the advance by Volume Sales to the ‘joint venture’ should be a first charge upon profits and that upon the repayment of such sum the profits should be divided equally, rests upon the following considerations: 1.

Don't use plagiarized sources.
Get Your Custom Essay on Law of associations partnerships Just from $13,9/Page

the parties became joint venturers in a commercial enterprise with a view to profit;

2. profits were to be shared (see Partnership Act 1892 as amended (NSW) s 2(3)); 3. the policy of the joint venture was a matter for joint agreement and it was provided that differences relating to the affairs of the joint venture should be settled by arbitration (see cll 7 and 9); 4. an assignment of a half interest in the contracts for the appearances of Cilla Black and Elton John was attempted, although, we would have thought, unsuccessfully; 5.

the parties were concerned with the financial stability of one another in a way which is common with partners … carrying on”- what does that mean?

Smith v Anderson (1880) ? tells us it involves the repetition of an act. => An ordinary partnership is a partnership composed of definite individuals bound together by contract between themselves to continue combined for some joint object, either during pleasure or during a limited time, and is essentially composed of the persons originally entering into the contract with one another. What if we do NOT have repetition? Is there carrying on of a business? No. for fairness reasons the Re Griffin Ex parte Board of Trade (1890) 1 undertaking can actually lead to a partnership?

United Dominions Corporation Ltd v Brian Pty Ltd and Others (1985)? evolution In Common It is not necessary, in order for a business to be carried on in common, that all of the alleged partners actively participate in the day to day management of the firm’s business. All that is necessary, in the above context, is for the firm’s business to be carried on either by or on behalf of all of the persons who are alleged to be partners. An important consideration in this respect is whether there are mutual rights and obligations between those on whose behalf the business is being conducted.

Legislation – Section 1 of the Partnership Act 1892 (NSW) provides that : (1) Partnership is the relation which exists between persons carrying on a business in common with a view of profit and includes an incorporated limited partnership. If the definition in s 1 of the Partnership Act 1892 (NSW) is satisfied then the law of partnership may apply. If a partnership is not proved it may be possible to apply other principles of trust or equity to the fact scenario. Cases Smith v Anderson 1880 => Investment case $100 for 90$ and the share holders do not know of the other people purchasing.

Hence no partnership. Lack of common interest. Lang v James Morrison & Co Ltd (1911) => The High Court upheld the appeal, finding that there was no partnership. Chief Justice Griffith observed that:[T]he real substance of the transaction was that the plaintiffs and Thomas McFarland agreed to enter into a joint venture. They were not partners as against third parties, but each party had certain rights against each other. Separate bank accounts where kept Must have an element of principle and agent right- did not exist. Fiduciary duty is important View of Profit

This element requires that the association must have as its object the acquisition of financial or pecuniary gains for its members. By way of contrast, in Wise v Perpetual Trustee Co Ltd (1903) AC 139, Lord Lindley noted that, in unincorporated voluntary associations, the intended gain is not for the individual members. Legislation – Section 1 of the Partnership Act 1892 (NSW) provides that : (1) Partnership is the relation which exists between persons carrying on a business in common with a view of profit and includes an incorporated limited partnership.

If the definition in s 1 of the Partnership Act 1892 (NSW) is satisfied then the law of partnership may apply. If a partnership is not proved it may be possible to apply other principles of trust or equity to the fact scenario. Cases Bova v Avati (2009) – Truth And substance of the arrangement – Wilkshire, ex parte Delihasse. The law from this is? The court decided they where of partner even though ….? ARE THE FACTS COMPLETE? Are they in a partnership? Presumably yes. “ DELIHASSE” quick finance has a lot of control despite the fact they do not share losses – the rules from S 2 SS3 are rebuttable due to delhasse. STATUTORY RULES

Rule 1: co-ownership S 2(1) The holding of property jointly as co-owners will not of itself create a partnership as demonstrated in Keith Spicer Ltd v Mansell [1970]. Facts: two individuals purchased a premises upon which they hoped to establish a restaurant. They intended to form a company for this purpose. -Prior to this formation, furniture was purchased by X for from a third party and was not paid for, so the third party then wanted to sue Y on the basis that it was in a partnership with X. – The court said there was no partnership as X and Y were not carrying on business in common but were preparing to do so as a company.

– Acts carried out in contemplation of a business being undertaken in the future did not point to a partnership. Further, the holding of property jointly did not change things. Rule 2: Sharing of gross returns S 2 (2) the sharing of gross profit will not be enough to create a partnership. This is demonstrated in Cribb v Korn (1911): Facts: Korn was employed as a rural worker by a landowner. The landowner entered into an agreement with Cribb under which the landowner had the exclusive use and occupation of a certain area of Cribb’s land.

– As part of the agreement, Cribb would provide machinery and stock and the landowner would pay Cribb half the proceeds of sale of the produce of the land and stock, whenever this occurred. – Korn was injured while working and claimed worker’s compensation from Cribb on the basis that Cribb and the landowner were partners. – HELD: HC said there was no partnership, it was a mere tenancy. As the landowner had exclusive rights to occupy the land and Cribb had no right to direct or control the landowner’s working of the land, there could be no partnership but merely a tenancy.

Further, the sharing of gross returns was not enough to establish a partnership, but merely constituted a rent. Rule 3: Profit and loss sharing S 2 (3) The difficulty in the interpretation of this subsection lies in its use of the expression ‘prima face’ to qualify evidence. It would seem that the fact of a profit-sharing scheme is admissible in evidence as to the existence of a partnership, but that fact by itself is not enough to draw the inference that there was a partnership: Television Broadcasters Ltd v Ashtons Nominees Pty Ltd (1979).

In Cox v Hickman (1880), Cox and Wheatcroft were getting a share of the profit as creditors but were not found to be partners. According to Wightman J at 443: “it is said that a person who shares in net profits is a partner; that may be so in some cases, but not in all; and it may be material to consider in what sense the words ‘sharing in the profit’ are used. In the present case, I greatly doubt whether the creditor, who merely obtains payment of a debt, and no more, out of the profits of the business, can be said to share the profits.

” The general rule is: Section 2(3)(a) of the PA provides 5 cases where the presumption that it is a partnership does not arise: 5 exceptions S. 4 –Firm definition – partnerships that has not been incorporated S. 5 (1) – Every partner within a partnership (excluding limited partnerships) has the right to represent the other partners for the purpose of the business as an agent UNLESS, they have no authority, or the person being dealt with believes they are not a partner.

5 (2) – General partner has the same power over general partners in a limited partnership unless (a) they have no actual authority to act; (b) If the person dealing with the GP knows that he has no authority, or does not believe them. S. 6 (1) S. 7 – Is for the case where if there is a use of credit for private reasons (1) if a partner does so it does not bind the firm unless he has special authorisation; (2) This same principle applies to General Managers. s.

8 – If there is a contract between partners set up saying that there is a limited authorisation or restriction and it is breached then it is not binding. (1) partner (2) incorporated limited partnership S. 9 – Liability of a partner. Every partner in firm is jointly liable with the other partners for all debts and obligations incurred while the partner is a partner. (2) general partner; (3) despite (2) a general partner wont be liabe because of (a) & (b). S. 10 – (1) 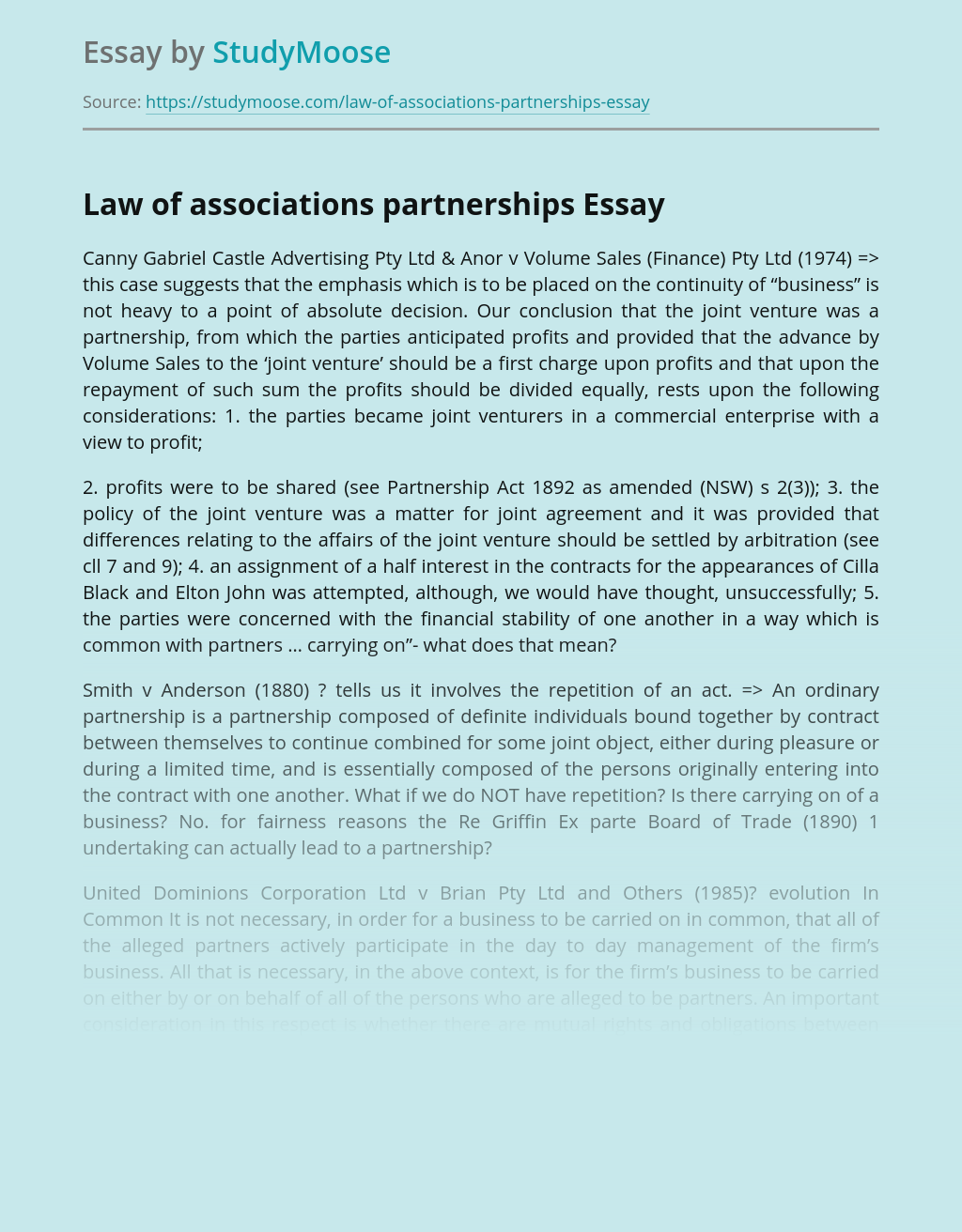 Sartre Said Hell Is Other People While Streisand Sang

Rate this post Topic: Sartre said Hell is other people while Streisand sang; people who need other people are the luckiest people in the world. With whom do you agree with? The above statements present two very different perspectives regarding the social behaviors practiced around the world. One could even say that in the end...

Rate this post For more than a hundred years, human beings have been excavating mountains and building roads for faster transportation. When the forests and mountains are destroyed, natural waterways are also disrupted. In today’s modern world, there is mass production of goods for daily consumption. The sprawling cities, high-rise buildings, cars, and electric appliances...