The results from the correlation analysis indicate that there is a positive association between money growth and inflation.

Monetary policy is one of the tools that a Government uses to influence its economy. Using its monetary authority to control the supply and availability of money, a government attempts to influence the overall level of economic activity in line with its political objectives. Usually this goal is “macroeconomic stability” – low unemployment, low inflation, economic growth, and a balance of external payments. Monetary policy is usually administered by a Government appointed “Central Bank” like the State Bank of Pakistan. Pakistan’s monetary policy is concerned with how much money circulates in the economy, and what that money is worth. The ultimate objective of monetary policy is to promote solid economic performance and higher living standards for Pakistani’s.

The best way to achieve that objective is to keep inflation low, stable, and predictable. State bank play a highly important role in the international financial systems today. With the right monetary policy they are able to bring about economic growth and financial stability in a country. Conditions in different countries are diverse; therefore the structure of a State bank can also be quite different. One of the functions of a State Bank is to ensure the health of the economy of the country. It does so by setting monetary policies, managing foreign exchange and reserves, setting interest rate and money supply to mange inflation among others.

However the function that a State bank is most associated with is setting monetary policies. It mainly influences the economy of a country by controlling the money supply, and one of its main policy instruments is interest rate. Interest rates set by the State bank affects the borrowing by commercial bank and other market institutions, hence affecting the other interest rates in the market. The relationship between the State Bank and the Government is an extremely important and equally sensitive area. They share virtually the totality of policy framework where by Ministry of Finance manages the fiscal policy while the State Bank organizes the monetary and exchange rate.

“Monetary policy is the process of managing a nation’s money supply to achieve specific goals such as constraining inflation, achieving full employment or more well-being. Monetary policy can involve setting interest rates, margin requirements, capitalization standards for banks or even acting as the lender of last resort or through negotiated agreements with other governments”.

A wide variety of policy systems are possible to conduct monetary policy operations, but in developing countries with floating exchange rates (like Pakistan etc.) and monetary policy involves the management of short-term interest rates by central banks to pursue the macroeconomic objectives of the economy.

• Price stability,
• Maintenance of full employment, and
• The economic prosperity and welfare of the people of the economy.

Price stability, that is controlled price level, is the imperative condition for the constant economic growth, once accomplished leads to full employment and economic prosperity. Price stability develops investor’s confidence – boosting investments, causing acceleration of economic activity and achievement of full employment. Thus, the significance of monetary policy is to achieve the inflation target (set by the State bank for required economic growth), and as a consequence, to accelerate strong and sustainable economic growth. Achievement of inflation target directs strong currency valuation in terms of other foreign currencies, resulting as favorable balance of payments.

• Use Open Market Operations to change the monetary base: The most effective and major tool the State bank uses to affect the monetary supply in the economy is open market operations. The bank would buy and sell government securities (usually bonds or T-bills) in exchange of hard currency. If the State bank decides to increase monetary base in the economy it buys securities from the open market and pays for these securities by crediting the reserve amounts of banks involved in selling. Conversely, in order to tighten the monetary base in the economy, the State bank sell the government securities, as a result collect payments from banks by reducing their reserve accounts. Having less money in these reserve accounts the opportunity cost of lending money decline, such that interest rates may increase, resulting a drop of investment spending, that is the slow down of economic activity.

• Changing the Discount Rate: Banks borrow money from the State Bank by cashing or discounting credit instruments, such as bills of exchange. By raising the discount rate SBP discourages bank to borrow money. If and when the goal is to increase the money supply, the Bank lowers its discount rate to encourage borrowing by the banks and thus helps increasing the money supply. Also by calling in existing loans or extending new loans, the monetary authority can directly change the size of the money supply.

How does Monetary Policy affect the economy of a country?

After having discussed the objectives and tools of monetary policy, now talk about how policy affects the economy:

Changes in the real interest rates affect the demand for consumption and savings of the people and also change the investment pattern of the businesses. For instance, a reduction in real interest rate lowers the cost of borrowing, encouraging people to borrow in order to consume (durable items like, electronic items, automobiles etc.). Moreover stimulating bank’s willingness to lend more and investors to invest more, on the other side discourage saving, resulting to increase spending and aggregate demand. Lower real interest rates also make stocks and other such investments more desirable than bonds, resulting stock prices to rise. People are likely to increase their stock of wealth.

Short-run changes lower interest rate result as currency depreciation, which means lower prices of home-produced goods selling abroad, making exports dearer and discourage imports, reducing the gap between imports and exports and having favorable balance of trade. Again this leads to higher aggregate spending on goods and services produced in the country.

The increase in aggregate demand for the output boosts up the production cycle; generating employment, as a result increase investment spending on the existing industrial capacity. Which accelerate the consumption further due to more incomes earned, thus attaining the multiplier effect of Keynes.

Monetary policy affects inflation in two ways. First, affecting indirectly, if monetary policy able to achieve multiplier effect, it boosts up economic activity. Initiating labor and capital markets to raise outputs beyond there capacities and creating an upward pressure on wages, thus resulting inflation to rise (that is cost-push inflation). Thus there would be a trade-off between higher inflation and lower unemployment in the short-run which further accelerate inflation. As wages and prices start to rise they are hard to bring down back, stressing the need for early policy measures to be taken. Secondly, monetary policy can directly affect inflation via future expectations. Like if people expect the rise in prices in future, they persuade to increase in wages, which in turn affect the prices, resulting higher inflation.

For this and other reasons, developing countries that want to establish credible monetary policy may institute a currency board or adopt dollarization. Such forms of monetary institutions thus essentially tie the hands of the government from interference and, it is hoped, that such policies will import the monetary policy of the anchor nation. However, recent attempts at liberalizing and reforming the financial markets are gradually providing the leeway required to implement monetary policy frameworks by the relevant central banks.

Significance of various channels that transmit the monetary policy shocks in Pakistan to the real economy has been analysed by few economists. With the emerging domestic and global price pressures, SBP tightened its monetary policy after a prolonged gap of a few years. The efforts to rein-in inflation, however, proved less effective due to a rebound in international commodity prices and a rise in domestic food prices later on. This was certainly an encouraging development, particularly as if was achieved without affecting economic growth as the real GDP growth remained strong at 6.6 percent in FY06. The objective of monetary policy in Pakistan, as laid down in the SBP Act of 1956, is to achieve the targets of inflation and growth set annually by the government. In pursuit of this mandate, SBP formulates the country’s monetary policy that is consistent with these announced targets.

What needs to be done to improve the effectiveness of Monetary Policy?

Apart from taking policy measures to address the emerging challenges, SBP also introduced structural changes in the process of monetary policy formulation and conduct to make the monetary policy formulation and implementation more transparent, efficient, and effective. Specifically, during the last couple of years, SBP focused on • Institutionalizing the process of policy formulation and conduct, • Stepping up movement towards a more market based credit allocation mechanism, • Developing its analytical and operational capacity, • Improving its capabilities to assess future developments to act proactively, and • Improving upon the communication of policy stance to the general public.

This paper is written with the aim of getting a clear understanding of Monetary Policy Framework and its effectiveness to control inflation in Pakistan. In this regard, I presented the salient features of current Monetary Policy. I have come up with the following findings. The monetary authority was successful in controlling inflation when it successfully controlled the money supply target. The calculation of money supply target needs to be improved to get appropriate target level of M2. It is also concluded that in the recent years SBP failed to control money supply and hence rate of inflation within the set target level. The results show that mostly developing countries fail to attain the desired goals of monetary policy. The basic hurdles are the deep debt burdens on government, and inflation pressures.

Like, Pakistan, although adopted tight monetary policy, stood at actual inflation rate of 7.7% (FY 2006-07), against the inflation target of 6.5% (in FY 07). However, the monetary policy plays effective role to control the money supply in economy in the short-run for a sustainable prosperous long-term growth of developed countries. Moreover, information and data problems in developing countries are much more severe than in advanced economies. This makes the art of implementing monetary policy in a developing country far more challenging than in developed countries. Nonetheless, this art is firmly rooted in the science of monetary policy as embedded in the current knowledge of economic science.

This paper provides an overview of the historical developments and achievements of State banks. Monetary policy, as well as State banks’ tasks and tools and the structure of SBP are discussed. The paper specifically discusses objectives, tools of monetary policy. How does Monetary Policy affect the economy, Inflation of a country, how to keep monetary policy stable. In addition, an analysis of the role of State Bank in stabilization of prices and controlling inflation and circulation of currency and importance of monetary policy in a developing countries.

Importance of Monetary Policy in Pakistan. (2016, Oct 12). Retrieved from http://studymoose.com/importance-of-monetary-policy-in-pakistan-essay 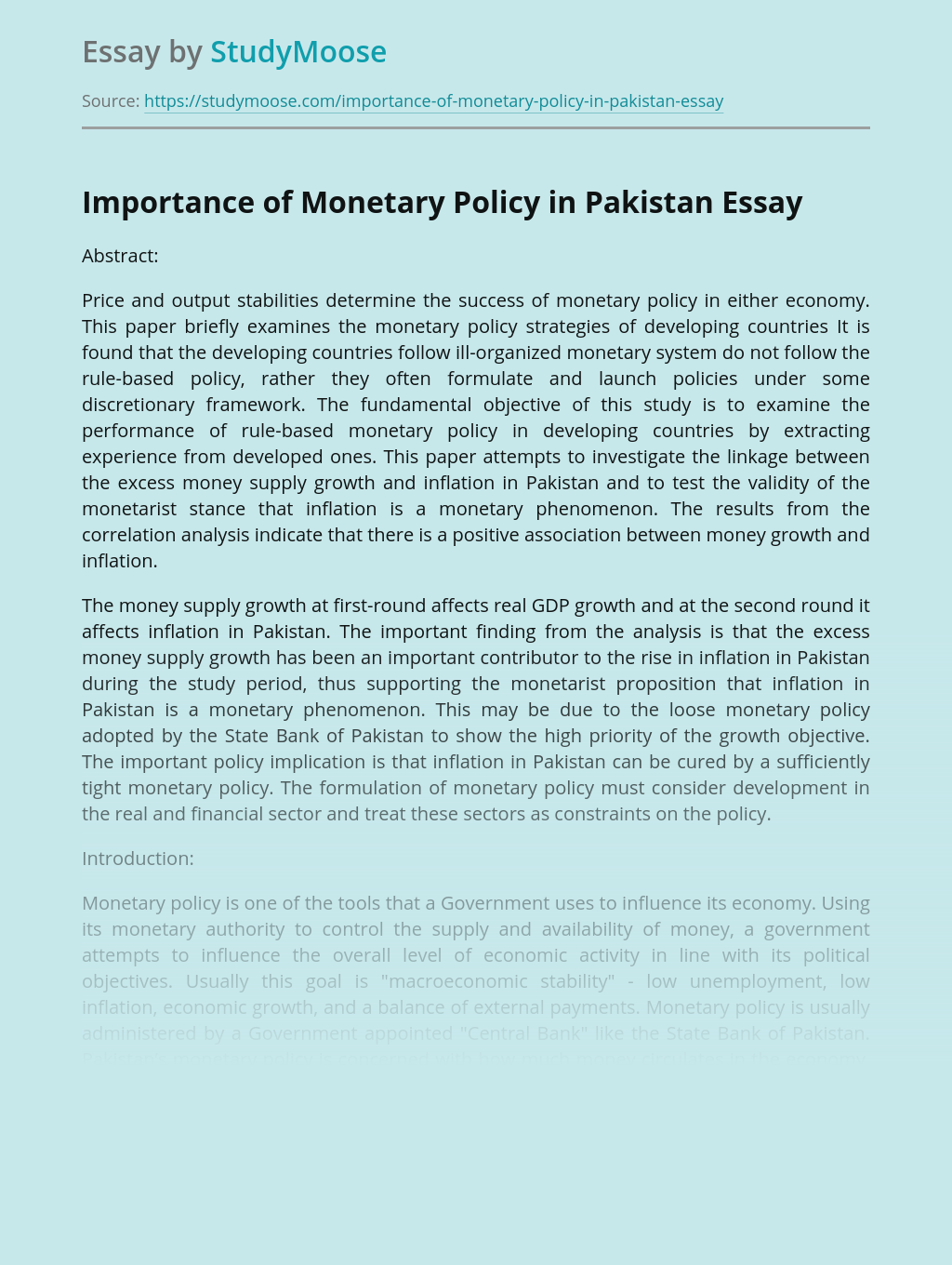 Don’t waste time
Get a verified expert to help you with Importance of Monetary Policy in Pakistan
Hire verified expert
$35.80 for a 2-page paper
Stay Safe, Stay Original