Impact of a First Impression

It has commonly been stated that one is never given second chance to make a great first impression. Everyday we have numerous interactions, where opportunities come and go in an instant, like sliding doors opening and closing. Ideally, we want to seize these moments in a favorable way. It is of great importance to understand how our human behaviors effect the first impressions we give others. Importance of First Impressions

By definition an impression is, “a characteristic, trait, or feature resulting from some influence” (Merriam-Webster Incorporated, 2013).

Don't use plagiarized sources. Get your custom essay on
“ Impact of a First Impression ”
Get custom paper
NEW! smart matching with writer

During the brief moments a first impression is made, someone else has determined their initial opinions of you based a number of verbal and nonverbal factors. Preparing for your first impression and possibly making minor adjustments can help you to obtain a desired outcome.

First impressions play a major role in both personal and professional interactions. In a business setting, a good first impression could result in being hired for a job or obtaining a large account.

Proficient in: First Impression Can Be Misleading

Whereas, in a social setting, a good first impression might impact whether someone of interest asks you out on a date or talks to you in a bar.

The Brain’s Role in a First Impression

Macfarlane (2008) stated that the human brain function is not only responsible for logic and creativity, but also where our instincts are developed. First impressions are determined as being favorable or not based on such instincts. Upon receiving a person’s verbal and nonverbal cues, the gatekeeper part of our brain will enter a fight or flight mode (Macfarlane 2008).

During this mode, messages are either accepted or rejected. If we instinctually have a bad first impression of someone, the opportunity to communicate further will not be received. My First Impression of John

Upon reading the situations of John the extrovert followed by John the introvert, I created a first impression of him. Each scenario painted contrasting pictures in my mind. My first impression of John has led me to create further opinions about how he and I might interact if put into a real life setting. In the first situation with John, he was as an extrovert.

I noticed he interacted with numerous people during his trip to purchase stationary. In analyzing my first impression of John, I believe he was in a good mood and truly enjoyed his day. John chose to speak with an acquaintance in the store, while he patiently waited for the clerk to become available. I perceive him as being someone who would be an engaging team member and positive representative of a company. In the second situation with John, he was described as an introvert.

Upon leaving the office, he chose to forego the opportunity of talking with a girl he had interest in the night prior. My impression of introverted John is that he is either not a very happy person or he had a terrible day at work which left him in an antisocial mood. Furthermore, unless John was wearing a suit and it was an extremely hot day, I do not understand why he would not walk on the sunny side of the street. Lastly, John choosing to not speak with anyone at the bar leaves me to think he is just not very friendly. Since John seems more comfortable alone than that in social settings, I feel he might have difficulty finding success in the business world. I assume he would find it beneficial to work on his people skills.

In reversing the two situations about John, my opinion of him in each setting drastically changed. I now find myself justifying the actions of John the introvert since it is now my first impression of him. For example, it is possible that John would have been interested in socializing if maybe the bar was not so loud and crowded. Similarly, another reason John did not socialize was because he only had time to briefly stop in before heading home to meet someone.

When reading the story of John the extrovert last, I feel as though maybe he should not have spent so much company time running what was supposed to be a quick errand. John could have been more proactive and looked for another clerk instead of socializing with an acquaintance in the store. It does not seem necessary to spend further time speaking to another person outside the store when he should have returned directly to the workplace.

According to Abraham Maslow’s Hierarchy of Needs theory, there is a hierarchy in which we fulfill our needs. The foundation of human needs begin with basic physiological requirements, such as food, water and sleep. Before we can begin satisfying the growth needs of feeling safety and belonging in our personal, professional and daily interactions, we must satisfy such physiological needs. Upon feeling safe and accepted, we seek and improve our sense of self-esteem followed by self-actualization.

Impact of a First Impression. (2016, May 16). Retrieved from https://studymoose.com/impact-of-a-first-impression-essay 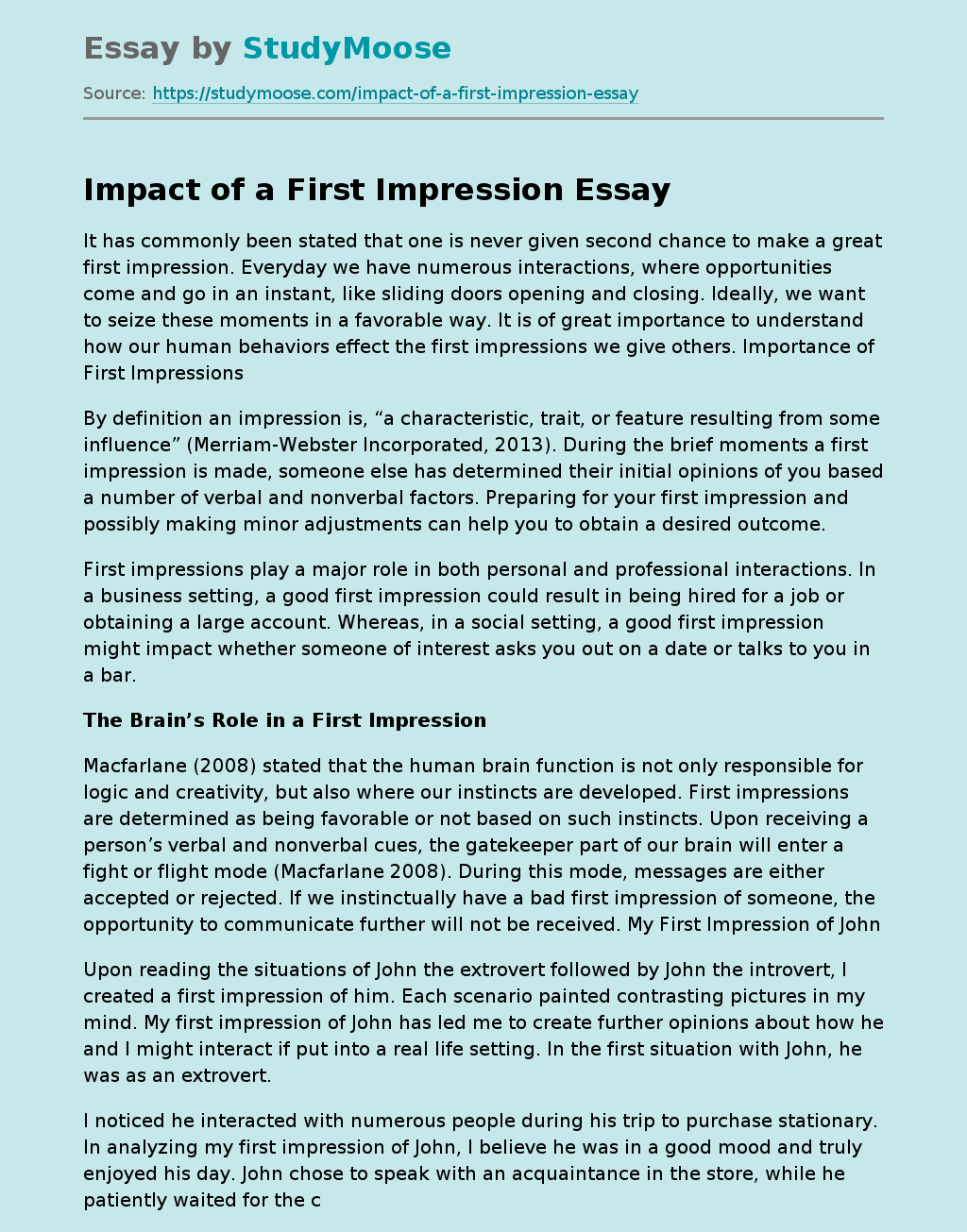