When European settlers arrived in the Prairies they drove out the local Indians, who had survived by hunting the huge herds of bison. The Prairie soil proved difficult to remove and cultivate with ploughs available at that time, and so much of the grassland was used initially for cattle ranching. After the 1840’s when the steel plough was developed, breaking the soil for cultivation became possible and cereal crops were successfully introduced. In the second half of the C19th three factors combined to help in the expansion and establishment of cereal growing as the principal farming activity of the region:

1. The world price of cereals increased steadily after 1860.

2. The demand for cereals from the industrialised Countries of W.Europe rose.

3. The continental railways were completed. These were vital for the transport of the huge quantities of cereals to the exporting ports.

By the C20th vast areas of the Prairies had been ploughed up and given over to cereal cultivation.

This was monoculture on a ground settlement, the dominance of one crop, wheat. It was ideally suited to the erosion conditions. The humus – rich chernozem soils were fertile. Melting snows provide moisture for the germinating wheat in early spring and this is the supplemented by rains which fall mostly during the growing season. The long sunny, summer days provide ideal ripening conditions. Winter frosts help to break up the soil.

Modern cereal cultivation in the Prairies has a very large capital input because it is so highly mechanised and uses large quantities of fertilisers and pesticides to increase the yields.

Over the years research has improved seed varieties giving greater resistance to disease, drought and ability to grow faster.

Although the region has many favourable characteristics there are also hazards for cereal growers. Summer thunderstorms can provide hail that can flatten and destroy the crop. Damage can also be influenced by summer tornadoes. Drought occurs naturally and periodically and these can affect yields. The removal of the natural vegetation and the extension of cultivation into marginal dry areas exposed the soil and make it vulnerable to erosion by wind and heavy rainstorms.

Over cultivation in the 1930’s resulted in unexpected soil erosion. In the spring of 1934 a large part of Oklahoma was reduced to a ‘Dust Bowl’. The area affected covered 16 million acres. During the winter months fine particles of soil were whisked away hundreds of miles and even out over the Atlantic. The heavier particles, not caught up in these “black blizzards”, remained as drifts and hummocks, which often attained heights of 20ft. The whole atmosphere was chocked with dust: in some areas people had to wear protective face cloths when out doors. The vegetation was coated and made unfit for the cattle.

More recently droughts between 1950 and 1989 damaged the soils further in spite of the lessons learnt from the past. Some ploughed fields lost up to 1m of their soil and in places as much as 25 tones of soil was blown away.

Soil degradation and erosion is the result of human failures to understand and mange this vital resource. The most serious threat is the removal of the natural vegetation cover, leaving the ground exposed to the element. Soil management in concerned with techniques required to maximise agricultural production while causing the least environmental damage.

After the lessons of the ‘Dust bowl’ and more recent droughts of the 1970’s some wheat lands were taken out of the production in marginal (drier) areas of cultivation. Farmers were paid to stop cultivating marginal land. However, there has only been a slight decrease in the cereal acreage. In fact over production has resulted in large surpluses, which have to be stored. Much more needs to be done if the cultivated area is to be reduced significantly in those regions that are most vulnerable to erosion.

Soil conservation methods have now been successfully applied in the eastern part of the High Plains:

* The use of contour ploughing

* The retention of straw and crop litter to protect the surface from raindrop impact.

From all this information I can come to the conclusion that after many years of the Prairies being ill treated and misused, they have finally been able to understand the way they need to be managed and looked after. They have learnt from their mistakes and have been able to use their mistakes to their advantage. 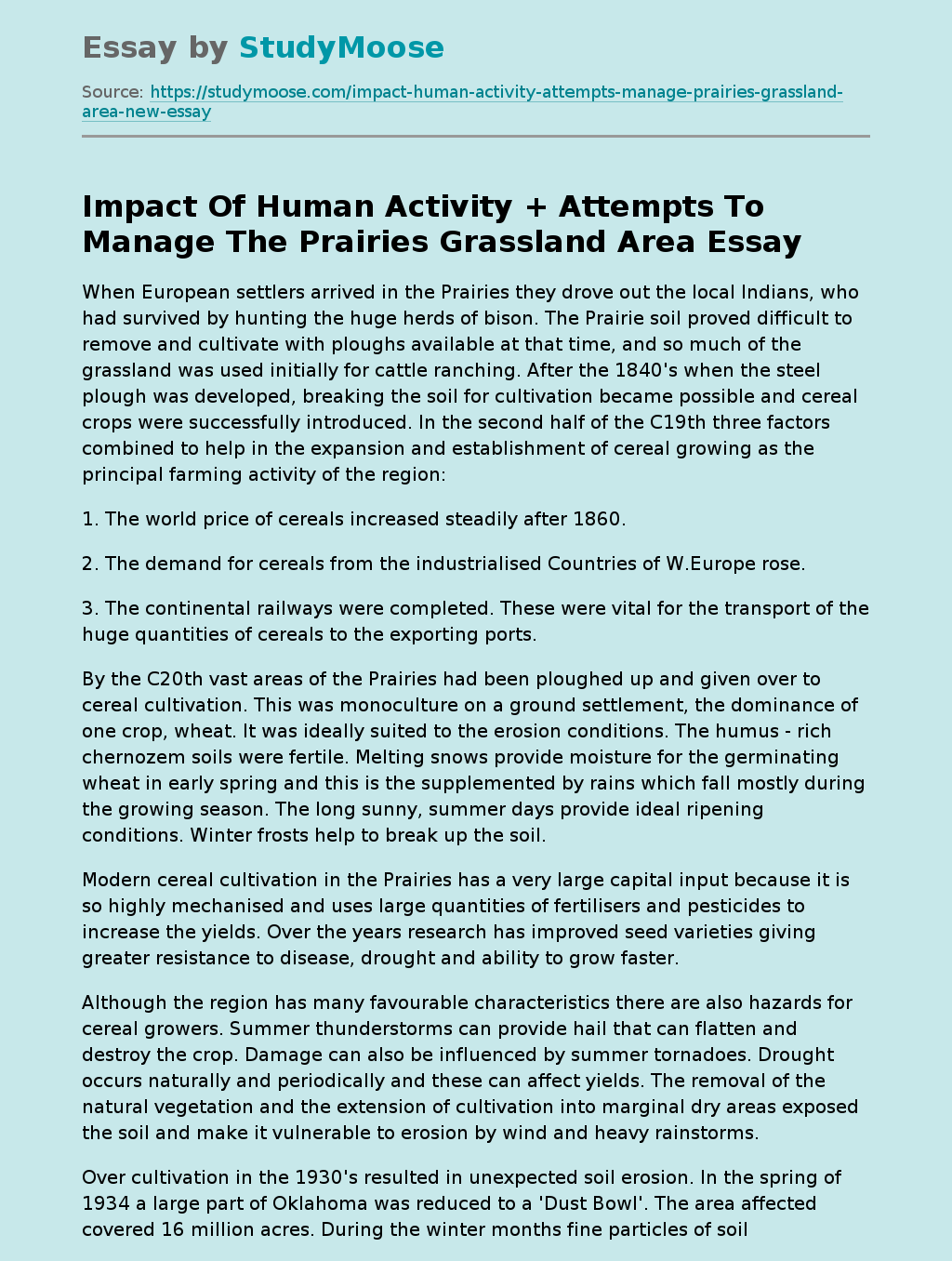