Imaging of Women in The Great Gatsby

The 1920’s was the year that everything changed for women. They gained more freedom when the 19th amendment was passed and women had the right to vote. The 1920s was the year that the word feminism became more used and brought up. Feminism is a political/social movement striving to gain equality of sexes. In the book The Great Gatsby by F. Scott Fitzgerald, women are seen as objects in the eyes of male characters. Fitzgerald creates a misogynist perspective through Daisy and Myrtle, by making them dependent on men.

Don't use plagiarized sources. Get your custom essay on
“ Imaging of Women in The Great Gatsby ”
Get custom paper
NEW! smart matching with writer

The Great Gatsby is a book that explores the want/need males have for happiness and wealth through the American dream. While the women are portrayed in a anti feminist way.

In The Great Gatsby men have physical dominance over women. Women are seen as silly dreamers, incapable of intelligent thoughts and realistic goals. In the book Tom uses his physical, financial, and social dominance to abuse Myrtle and Daisy. The way he treats Daisy brings her to think, “that the best thing a girl can be in this world, [is] a beautiful little fool” (Fitzgerald, 17).

During the novel it was said that, “If [Tom] left the room for a minute, she’d look around uneasily, and say: ‘Where’s Tom gone?’”. This quote said by Nick about Daisy displays a misogynist example of how women need men.Daisy is weak, she knows women are known in society for being foolish. The only role for women is to be a mother, a wife, or an image for men to want in the 1920s.

In The Great Gatsby Jordan Baker is a woman portrayed as being incapable of being successful. Her career as a professional golfer is built off cheating at tournaments. “ At her first big golf tournament there was a row that nearly reached the newspaper a suggestion that she had moved her ball from a bad lie in the semi-final round. The thing approached the proportions of a scandal then died away. A caddy retracted his statement, and the only other witness admitted that he might have been mistaken”(Fitzgerald 57). This quote shows how Jordan cheats during a golf tournament and gets caught and pays off the caddy. With Fitzgerald writing that he’s implying that she would be incapable of being successful without cheating. In the book Nick mentions that he, “…was flattered to go places with her, because she was a golf champion, and everyone knew her name.”(Fitzgerald 57). That shows that not only did Jordan make a name for herself but men, like Nick, were interested and flattered to be around her. Jordan is only accepted for her success as a golfer because of her masculine like qualities, but since she’s a woman, Fitzgerald implies she must have cheated her way to the top because there is no way she could share equal success.

Fitzgerald writes Myrtle Wilson as a character who lives part of her life in an abusive marriage, and the other part as Tom’s mistress. Myrtle is talked down to throughout the book and is only seen as an object to Tom. She’s described as being older and unattractive and, according to Nick, obnoxious and loud. Myrtle is used by men through physical, mental, and emotional abuse. On page 37 Myrtle and Tom are having an argument and Nick says, “Some time toward midnight Tom Buchanan and [Myrtle] stood face to face discussing, in impassioned voices, whether [Myrtle] had any right to mention Daisy’s name. ‘Daisy! Daisy! Daisy!’ shouted Mrs. Wilson. ‘I’ll say it whenever I want to! Daisy! Dai ––’ Making a short deft movement, Tom Buchanan broke her nose with his open hand.” Myrtle is physically harmed for her boldness and for challenging Tom. It shows anti feminism because the second Myrtle tried to break out and speak for herself against Tom he physically hurt her.

The Great Gatsby follows a misguided social norm that men are to have dominance over women, not equality. Women are talked down to as objects. In The Great Gatsby, we see Daisy, Myrtle and Jordan as dependent upon male figures. Men are showed as hard workers, while women aren’t successful. The women in The Great Gatsby are described as helpless and dependent on men because they are not allowed to pursue their own dreams.

Imaging of Women in The Great Gatsby. (2021, Apr 26). Retrieved from http://studymoose.com/imaging-of-women-in-the-great-gatsby-essay 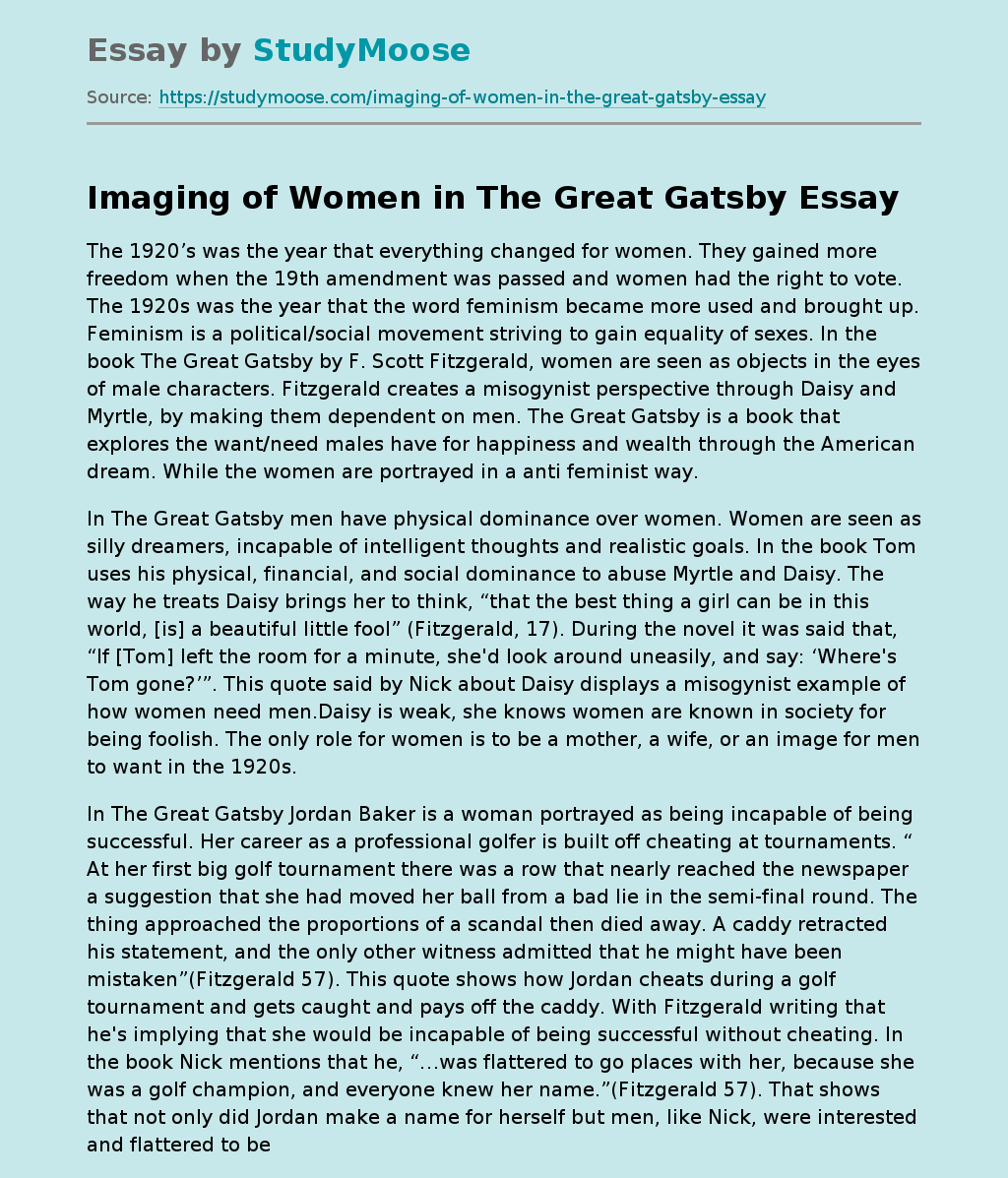