The book “Science and Ideology: A Comparative History” by Mark Walker seeks to give a comparative history of ideology and science in the 20th century. Chapter 3, “Ideologically Correct Science,” is considered to be one of the strongest chapters of the work. Conventionally, scholars have taken the cases of Nazi Germany and the Soviet Union as typical examples in studying the relationship between ideology and science. However, in Chapter 3 of the book, Gordin, Grunden, Walker, and Wang expand conventional analysis to include the cases of France, Japan, the United States, and China.

Don't use plagiarized sources. Get your custom essay on
“ Ideologically Correct Science ”
Get custom paper
NEW! smart matching with writer

The purpose is to arrive at an examination of how science functioned in different countries under different ideological regimes. “Ideologically correct science” is defined as the “attempts by the state (or at least some representatives of, or forces within the state) to not only use science, but also transform it into a more ideologically accepted form, both with regard to scientific content and institutions” (Gordin, 2003, p. 35). Science is studied in relation to ideology because it is generally assumed that science is influenced by the political environment.

However, how this relationship takes place in specific circumstances is not clearly known (Gordin, 2003). Some examples cited by Gordin et al. that demonstrate the call for an ideologically correct science under different types of regime include the Jacobins indicating the need for a democratic and not aristocratic science in the French Revolution, The Bolsheviks calling for a Marxist and not a bourgeoisie science in the Soviet Union, and the Red Guards highlighting a people’s science during Mao’s Cultural Revolution, to name a few (Gordin, 2003).

Gordin et al. proceed to cite different cases that demonstrate the interplay of science and ideology. They examine the state of science amid political and social upheavals in France, Japan, Soviet Union, the United States, and China. The different examples clearly have similarities and differences, and several conclusions were made. First, science is not determined by ideology, nor is it entirely not influenced by ideology.

Second, there is no regime that has attempted to invariably enforce on its scientists an ideologically correct science. A part of the regime or certain individuals might have attempted to do so, but they do not represent the entirety of the political system. Furthermore, there are certainly other reasons for the attempt apart from the goal to enforce an ideologically correct science. Third, not one ideology, not even democracy, was successful in imposing its ideological standards to its scientists. According to Gordin et al. communist governments might appear to have been more imposing, but in fact, they were even more flexible and practical at times (Gordin, 2003). Evidently, there are similarities and differences in the relationship between science and ideology in the examined cases, but bottom line is, no political system has shown itself to be better or worse at harnessing science. This is because scientists frequently respond to the pressures they face from the government by simply cooperating with the regime instead of resisting or attempting to transform it.

In summary, Gordin et al. ’s “Ideologically Correct Science” in Walker’s “Science and Ideology: A Comparative History” presents a relevant examination of science and ideology as earlier works mostly focused on Nazi Germany and the Soviet Union only. The analysis, although sacrificing depth over breadth, gives an expanded view through the use of different cases and regimes where the relationship can be more closely examined.

Second, the careful analysis helps us arrive at a thorough understanding of the issue. While we assume that science should generally be uninfluenced by any factor, more so by political and ideological ones, it is certain that we agree, to some extent, that it is influenced and shaped by ideology through the imposition of its standards and requirements. The essay of Gordin et al. helped clarify that the relationship between the two is not simplistic as it seems.

In fact, their interaction can best be described as complex and subtle. Finally, the essay is well organized as it gives a brief introduction of the topic before citing the individual cases and finally presenting the conclusions of the work. Overall, it is a must-read for individuals interested in the relationship between ideology and science in the 20th century, particularly on how science is shaped under different ideologies in different countries. 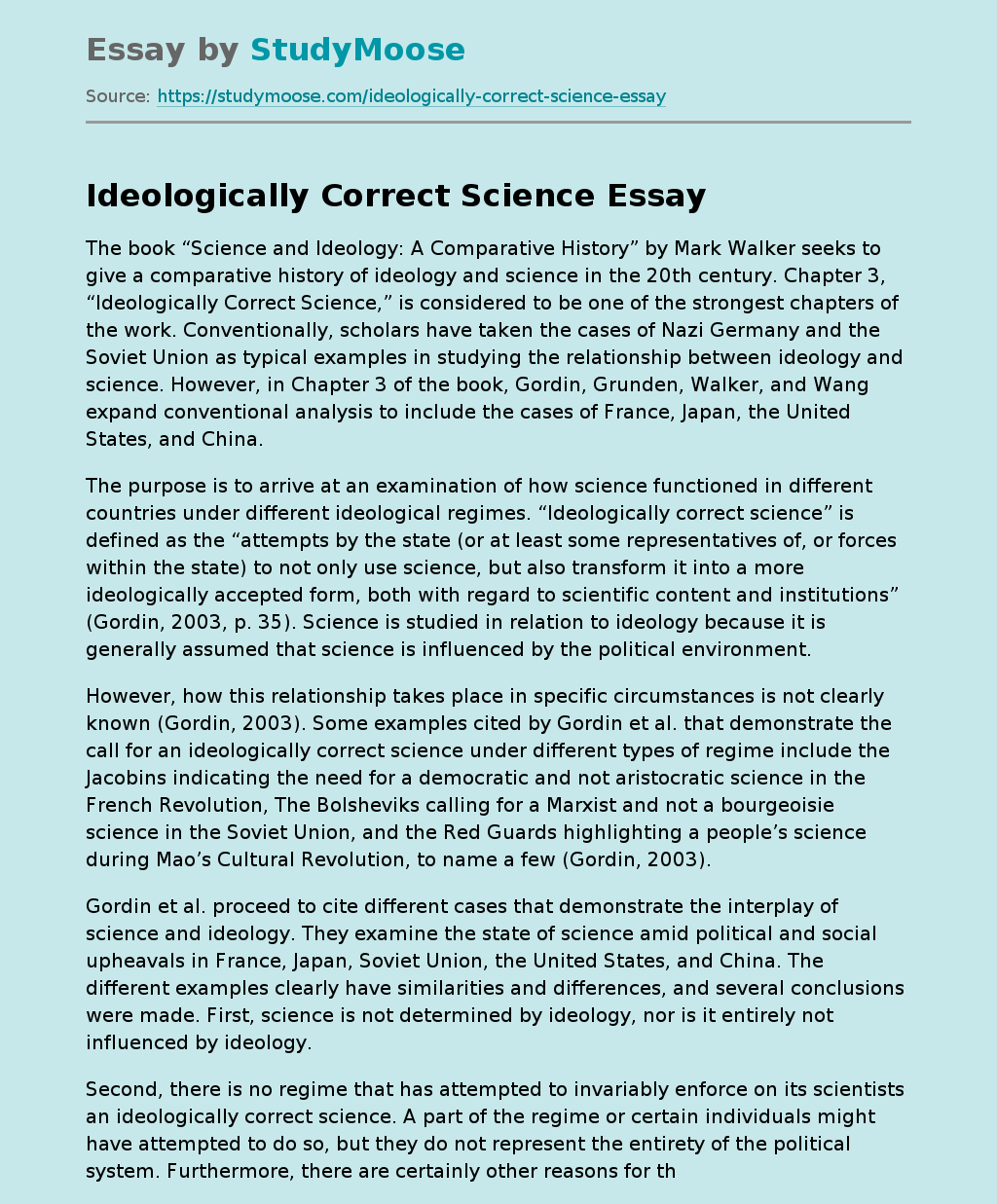