There are many reasons for establishing the identity of a microorganism. The reasons range from the knowing the causative agent of a disease in a patient, so as to know how it can be treated, to knowing the correct microorganism to be used for making certain foods or antibiotics. Laboratory scientists are able to isolate, identify, and determine the antimicrobial susceptibility pattern. Some methods that are used in laboratory settings are: the use of microscopy whether it’s using wet mounts or stains, macroscopic antigen detection, cultures, and susceptibility testing.

When using microscopy methods, wet mounts don’t require the use of stains or dyes due to the fact that the microbe is usually large and/or motile. Microbes that aren’t large and/or motile are stained. Without staining, bacteria are difficult to visualize. “Gram staining is the most useful stain procedure, for the fact that it differentiates between organisms with thick peptidoglycan cell walls, which are gram-positive, and those with thin peptidoglycan cell walls and outer membranes that dissolve with alcohol or acetone, these being gram-negative, (Fauci, 2009).

” Macroscopic antigen detection is used to identify microbes by means of their protein antigen.

Cultures are collected for bacterial isolation; this relies on the use of artificial media that will support bacterial growth, an example being a nutrient agar. Susceptibility testing allows the physician to choose antimicrobial agents and also identify potential infection-control problems. The purpose of this study was to apply all of the methods that have been learned so far in the microbiology laboratory class for the identification of unknown bacteria.

The third procedure that needed to be done was to streak the unknown out on a Nutrient Agar plate, using the zig-zag streak method described in the lab manual. Once the purity of a colony has been confirmed by the staining procedure, cells can then be transferred to a sterile medium to begin a pure culture. After determining the gram reaction, specific biochemical tests were performed. Since unknown #1 was determined to be gram-positive cocci, a Mannitol Salt Agar (MSA) test was performed and the organism was inoculated and streaked onto a plate. Along with the inoculation and transfer onto an agar slat. The plates and slants were each incubated at 37℃ for 24 hours.

The purpose of this study was to apply all of the methods that have been learned so far in the microbiology laboratory class for the identification of unknown bacteria. After several differential tests, it was concluded that unknown #1 was Micrococcus luteus. After performing the Gram stain to determine that the unknown was gram-positive cocci, the organism was grown on a Nutrient Agar plate and then an agar slant for use in inoculating the rest of the biochemical tests. All of the biochemical tests worked well except for the MacConkey agar. It gave a negative result which is conclusive with M. luteus. This was determined since it had no color change. When the MSA was inoculated with unknown #1, it showed a yellow pigment which is a characteristic of M. luteus. The nutrient agar plate and slant also produced the same yellow colonies, which are also characteristics of M. luteus.

“The origin of name for M. luteus happens to be golden yellow, correlating to the colony characteristics, (Alderson, 2011).” Micrococcus are aerobic organisms, meaning that they thrive in an oxygen rich environment. It can also grow well in environments with little water or high salt concentrations. “Micrococcus is normally present in the indigenous microflora of the skin, also in the mucous membranes such as the nasal cavities, the upper respiratory tract, and the lining of the mouth, (Engelkirk, & Duben-Engelkrik, 2008).” Can also be found in dust, soil, and the air we breathe. Considered an opportunistic pathogen. Patients who are immunocompromised with debilitating underlying diseases have to be concerned about these bacteria. It’s also been known to be responsible for causing nosocomial infections.

Treated with penicillin G 10 to 20 million U/day IV for 4 weeks, (Beers, & Berkow, 1999).” “The signs and symptoms of meningitis are a prodromal respiratory illness or sore throat often precedes the fever, headache, stiff neck, and vomiting. To treat, use Vancomycin and ceftriaxone and ampicillin, (Beers, & Berkow, 1999).” “Finally the signs and symptoms for septic arthritis are: moderate to severe joint pain, warmth, tenderness, and restricted motion.

Initial antibiotic selection depends on age, past history, extra-articular infection, and fluid Gram stain findings, (Beers, & Berkow, 1999).” In hospitals, the bacteria can be transmitted by hospital staff who may have failed to wash their hands properly by going from one patient to another. The main transmission path is direct or indirect contact with contaminated persons or objects. It can be prevented by using the proper handwashing techniques. Overall you’re able to learn all the steps required to identify unknown bacteria. Skills could be better improved by practicing on different unknowns to see if you’re able to identify them better. 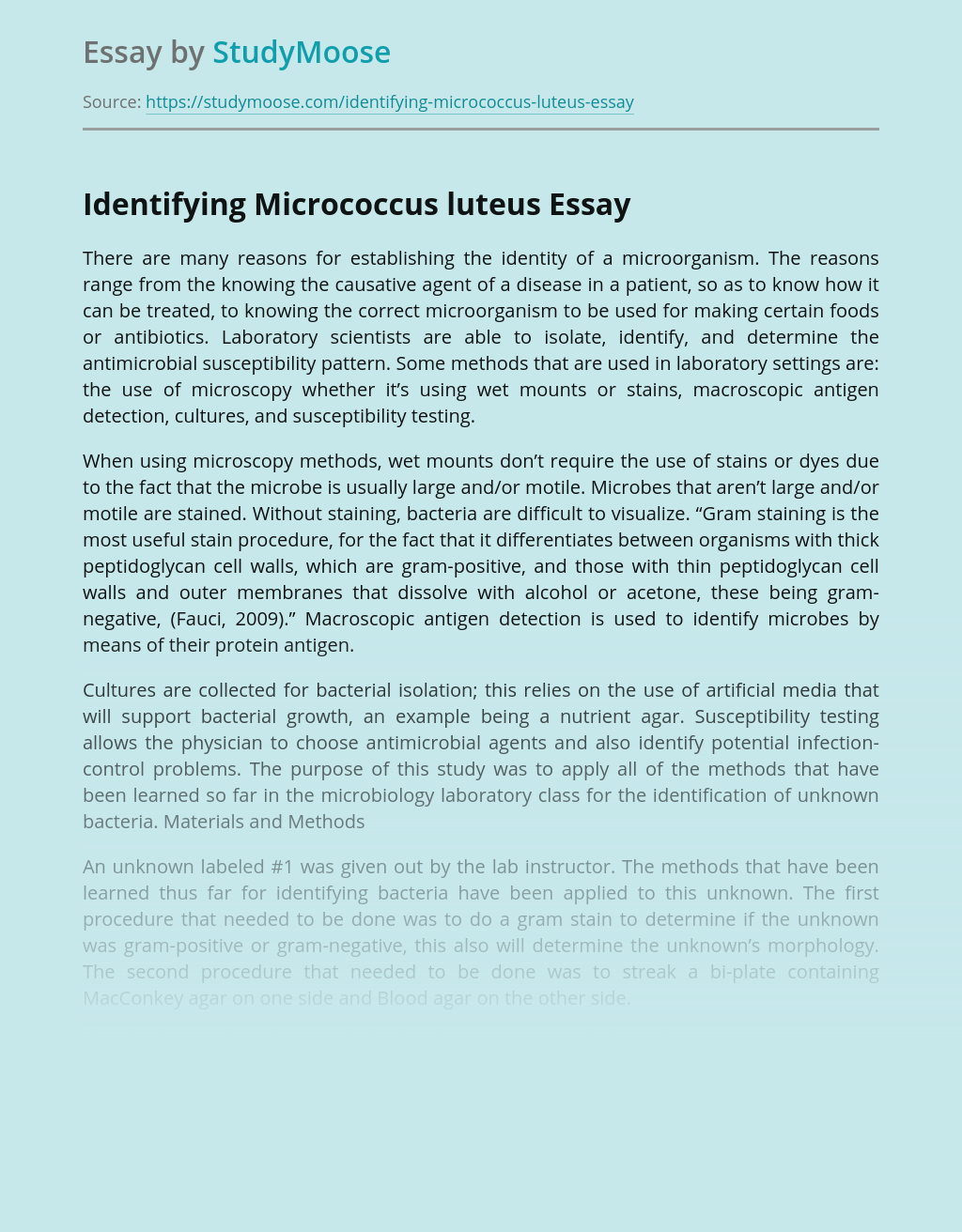