I Heard a Fly Buzz When I Died and After the Apple PIcking: An Analysis

A poet uses the elements of poetry to express his/her theme. This is particularly true in the poems I Heard a Fly Buzz When I Died by Emily Dickinson and After the Apple Picking by Robert Frost. Both poets use metaphor and rhyme scheme to accentuate the themes of these two famous poems by two of America’s most beloved poets. Metaphors, comparing two unlike or unrelated things, are essential to poetry and the purpose of poetry is to evoke an emotional response.

Don't use plagiarized sources. Get your custom essay on
“ I Heard a Fly Buzz When I Died and After the Apple PIcking: An Analysis ”
Get custom paper
NEW! smart matching with writer

Therefore, there must be a theme, or main point, to a poem and that point is what will awaken emotion in the reader.

I Heard a Fly Buzz When I Died is a work that when the title or first line is read, sets a tone of uneasiness because it deals with death and flies. Most people do not want to dwell on their own mortality and no one can find tolerance for a fly. However, Dickinson portrays death in a way that it is only thought of as part of the natural process of life and she does this through the use of metaphors.

The most obvious metaphor is where death is compared to a fly. The fly is seen as an annoying insect that is drawn to putrid decaying things that were once alive.

The fly is insignificant where humans like to think that the whole world will be affected by their deaths, in reality, it will be as common as a house fly. The next metaphor is tied to the first in that the deathbed watchers are waiting for the King to make his presence known in the room.

The King is obviously a metaphor for a royal personification of death. While they are anticipating some type of pageantry, death shows himself as a fly which heightens the theme of the commonality of death. After the Apple Picking is also rich with metaphors.

The most obvious metaphor is the comparison of death with sleep. The narrator has finished a hard day’s work picking apples and he is extremely tired. In fact, he has fought sleepiness all day. The setting is late fall to early winter which also points to the end of life. This sleep is something that the narrator can not fight just as a person can not fight death. When the time comes, there is nothing a person can do but give into it. Rhyme scheme is another way that Dickinson and Frost accentuate the theme. In After the Apple Picking, the rhyme scheme is varied and subtle just as death can be.

Death is certain like the rhyme scheme, but it is different for each person and it is not always earth shattering. Dickinson’s rhyme scheme in I Heard a Fly Buzz When I Died does follow a pattern, but it is also subtle. Her use of subtly takes the form of slant rhyme so that there is not a harshness that would detract from the theme of the commonness of death. Theme is the major element of poetry and through the use of other poetic elements, it can be conveyed effectively. Emily Dickinson and Robert Frost knew this and made use of rhyme scheme and metaphors to enhance the meanings of their poems.

I Heard a Fly Buzz When I Died and After the Apple PIcking: An Analysis. (2016, Nov 16). Retrieved from https://studymoose.com/i-heard-a-fly-buzz-when-i-died-and-after-the-apple-picking-an-analysis-essay?post 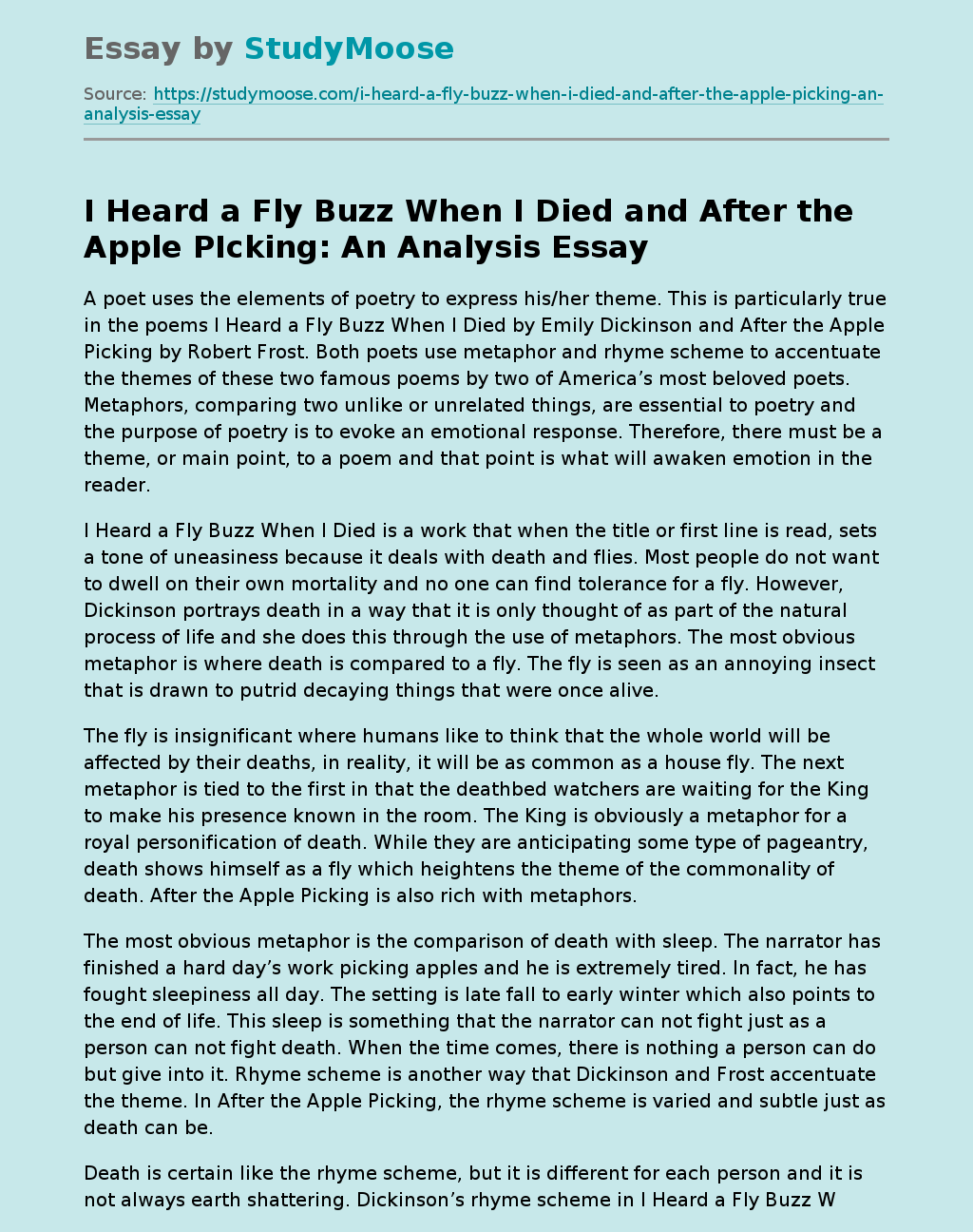