Hyphenated Americans and the Hardships of the American Indians

Many Americans recognize themselves with a hyphenated designation. They call themselves Asian-Americans, Arab-Americans, Jewish-American, Cuban-Americans, native-Americans and many other. They considered themselves immigrants -people who moved to the United States to seek legal permanent residency and stable sources pf livelihood. Indeed, it is said that the United States has always been a nation of refugees and immigrants, with the exception of the natives living here before the Spanish, French, Viking, Dutch and English explorers arrived in the 16th and 17th centuries.

Don't use plagiarized sources. Get your custom essay on
“ Hyphenated Americans and the Hardships of the American Indians ”
Get custom paper
NEW! smart matching with writer

Native Americans (Indian American) who lived on the North America peninsula for at least 16,000 years had a very diverse collision on American history and racial relations. It is noticeable that during the independent periods, a long series of conflicts between Indian tribes erupted for almost 2000 years. These include wars, massacres, imposition of treaties and forced displacement done by the immigrants in their native soil.

History books documented the first racial discrimination: Hernando De Soto burned a number of Indian villages in 1540, with the consent of the Spanish Crown.

In early 1700’s, the English massacred nearly 800 Choctaws. Afterwhich, the idea of Indian exclusion became popular. Choctaw elders described the incident in 1849: “We have our homes torn down and destroyed, our fences demoralized, cattle was slaughtered into our fields and we ourselves have been plagued, chained, confined and personally abused, until by such management of our some best people have died,” (William, 1988).

In this view, some ideological expansionist justification included stereotyped views of all Native Americans as “merciless Indian savages,” despite triumphant efforts of American radicals to eradicate discrimination.

The most popular attempt happened with the so called California Gold Rush, when thousands of Native Americans died in the gold mines of California and Arizona. Under this rule, Indians were subjected to de facto slavery.

Thus, in 1850, the state of California entered the Union as a free state (including the issue of slavery); slavery was formally practiced in 1863 when the California Legislature ratified special laws on slavery. Former President George Washington believed that Native Americans were equals of the ‘modern’ American but recognize the fact that their societies were less technologically advanced. This led to the formulation of a set of policies designed to modernize these societies.

The act partly stated: Be it enacted by the Senate and House of Representatives of the United States of America in Congress assembled, That all no citizen Native Americans born within the territorial limits of the United States be, and they are hereby, declared to be citizens of the United States: Provided, That the granting of such citizenship shall not in any manner impair or otherwise affect the right of any Native American to tribal or other property. ” Indian Citizen Act of 1924 Over time, as the immigration intensified, American Indians were gradually mixed into the prevailing society resulting to erosion of monolithic solidarity of ethnic cultures.

But less evident was the immovable preservation of the unique characteristics of the dominantly flooded ethnicities. A civilizing pluralism steadily saturated the homogeneous principles that “natives” insisted were very important to the American distinctiveness. As ethnics detached, hyphenated societies reproduced. Thus, complexity in historical origins is evident in their ethnic closed society. For now, what is clear is that the Americans are still in making its way to accept this reality. In this sense, the remarkable ability of the Americans to fuse diversity into harmony is said to be an ever-changing mosaic of their culture.

Hyphenated Americans and the Hardships of the American Indians. (2016, Sep 24). Retrieved from https://studymoose.com/hyphenated-americans-and-the-hardships-of-the-american-indians-essay 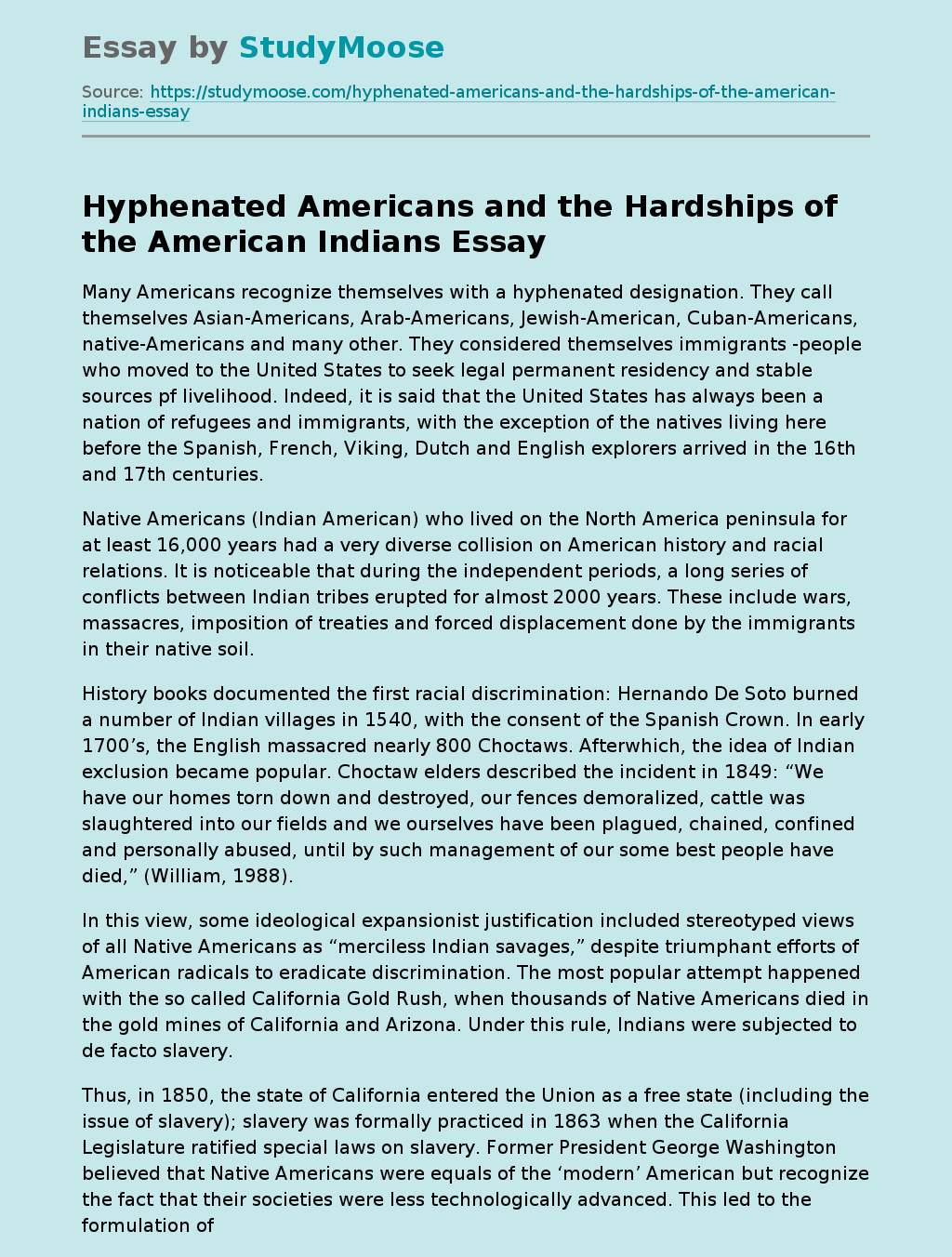