Scholars differ on where the Cherokee subculture came from and when they arrived on their traditional lands in the Southeast. The archaeological record of human occupancy of the Southeast goes back to at least 10,000 B. C. (Muller, 1978, p. 283; Canouts and Goodyear, 1985, p. 181), but this does not mean the Cherokees, or even their very distant ancestors, were there that early. Cherokees, as Cherokees, did not exist nearly so far back in time, nor did they necessarily emerge from the first or even from early occupants of the Southeast.

Don't use plagiarized sources. Get your custom essay on
“ Culture of Cherokee American Indians ”
Get custom paper
NEW! smart matching with writer

The Cherokees as a more or less distinct American Indian people seem to be at the very most only one or two thousand years old. They may have developed from other American Indian peoples already in the Southeast, or they may have migrated there from another region. The Cherokees say they and other human beings were created after plants and animals were made. Plants and animals were told by the creator–the Cherokees do not know who he or she was–to stay awake for seven nights and watch the world.

Most could not do so.

Of the plants, only the spruce, cedar, pine, holly, and laurel trees were able to watch so long: that is why they are now green all year. Of the animals, only the owl, the panther, and a few others were able to stay awake: that is why they see at night and prey on those who must sleep. Human beings were then created: “At first there were only a brother and sister until he struck her with a fish and told her to multiply, and so it was.

” Seven days afterward the girl had a child; another came seven days later, then another, and so forth, and the human beings “increased very fast until there was danger that the world could not keep them.

Then it was made that a woman should have only one child in a year, and it has been so ever since” (Mooney, 1982, p. 240). The Cherokees do not now know when or how some humans first became Cherokees. Almost certainly they had their origins in an ancient time, distinct from the present, when things were not as they are now. The Cherokees think they may even have emerged from the ground after other human beings were created, for it is said there is another world under the surface, identical except that the seasons are different.

According to the Cherokees, “The streams that come down from the mountains are the trails by which we reach this underworld, and the springs at the heads are the doorways by which we enter it, but to do this one must fast and go to water and have one of the underground people for a guide” ( Mooney, 1982, p. 240). Some scholars have asserted that this is where the name Cherokee came from–given them by their neighbours. The scholars have argued that Cherokee means “cave people,” for the Cherokees are said to have come from under the ground (Reid, 1970, p. 3) and also lived in a mountainous land full of caves.

The eighteenth-century trader James Adair asserted that the name came from the (apparently Cherokee) word chee-ra, meaning (sacred) fire, forming cheera-tahge, or “men possessed of the divine fire” (Adair, 1930, p. 237). Probably the name is from the Creek chilokee, “people of a different speech,” as John W. Swanton has stated; perhaps it is the name from which the form Chalaque was derived (Swanton, 1985, p. 49-50). The anthropologist John Witthoft supported this interpretation, based on his work with Eastern Cherokee “informants”: “The name came from the Creek, Celokokalke, ‘people of another language’.

” He asserted, “The Creek name by which the Cherokee were first known to Europeans became the general name for them in the Southeast, and was soon accepted even by the Cherokee themselves; names for other tribal groups have come into existence after a similar fashion” (Witthoft, 1947, p. 305). The Cherokees commonly called themselves Tsalagi or, in the plural, Ani-Tsalagi, perhaps “corrupted” to form the name Cherokee or perhaps derived from the same word as Cherokee. According to James Mooney, their proper name for themselves was Yunwiya or, in the plural, Ani-Yunwiya.

It means, more or less, “the people,” “the real people,” or “the principal people” (Mooney, 1982, p. 15). Tradition played an important role in Cherokee clans. It made sure certain elements of a culture from generation to generation were passed down. Such as, the traditional matrilineal Cherokee family structure, which means descent, is traced through the female line (Conley, 2002). The children belonged to the mother and her family clan. There was not any relatedness with the father and he’s family clan.

This family structure provided a safe and secure environment for women and children. Also, it meant the man lived in the wife’s house, surrounded by her clan’s people, so he would not dare to abuse her unless he wanted a tribal beating. Women were largely incorporated into the tribes. Not only was she the head of her domain with mutually respected power and authority, she had equal say in the affairs of war and peace. She was also in charge of the household and nourishment of her family. The women were involved in many functions of daily life.

It seems as if the women were the tribe, but not for long. Years after the first American contact, European traders living amongst would marry Cherokee women. European traders could not accept that fact of tracing descent through the female line, but slowly the clan system gave into the European style bilateral family, which traced descent through both male and female (Conley, 2002). The Cherokee were not too happy with this movement. It jeopardized the Cherokee’s clan traditional ways of a matrilineal family structure carried on for many centuries.

Nevertheless, the Cherokees could do nothing about it. Before the first known contacts, life of the Cherokee nation had grown and thrived for many years in the south-eastern United States in the lower Appalachian Mountains in states such as: Georgia, Tennessee, North and South Carolina, and parts of Kentucky and Alabama. However, in less than thirty years, after the first recorded contact with outsiders, in particular with Hernado De Soto in his expedition of 1540, the Cherokee Indians reformed their culture.

Many adaptations took place which resembled similar American cultures. The Cherokee soon built schools and court systems. This infuriated Andrew Jackson, a supporter of the Indian removal policy. After awhile, George Gist, also known as Sequoyah, established a Cherokee written language, utilizing an ingenious alphabet of 86 characters in 1821 (Ehle, 1925). Soon, this was adopted into Cherokee culture and a newspaper was formed. Again, Andrew Jackson grew more furious. He wanted the Cherokees removed off their lands.

In 1830, United States Congress passed an Indian Removal Act pushed by President Andrew Jackson following the recommendation of former President James Monroe in his final address to Congress in 1825 (King, 1979). This act enforced the previous Georgia Compact of 1802, since many were ignoring that removal act. But, many opposed this Indian Removal Act ratified by congress. After debates over this issue, the oppositionist won. However, Andrew Jackson was able to reinforce the act, due to the Treaty of New Echota on Dec. 29, 1875 (Conley, 2002).

The signing of the Treaty of New Echota set the stage for the beginning of Cherokee extermination. The treaty signed away the entire remaining tribal territory east of the Mississippi in exchange for five million dollars and the right to occupy lands west of the Mississippi (King, 1979). Major Ridge, John Ridge, Elies Boudinot, and the rest of the Treaty Party doomed the whole Cherokee Nation when they agreed to sign a fraudulent treaty with the federal government, which did not represent the Cherokee Nation as a whole (Martin, 2001). The Ross Party, people who oppose the removal treaty, tried to resist, but nothing else could be done.

This removal process started what was to be known as the “Trail of Tears” or “Trail where they cried. ” This forced migration journey consisted of thirteen groups of consecutive waves led by Cherokee captions that lasted from August 28, 1838 to March 18, 1839 (Conley, 2002). Over the journey many Cherokees died, approximately, four thousand out of sixteen thousand, due to diseases, exposure, or fatigue (Martin, 2001). The history of the Cherokee people is one of defeat and despair. After the first encounters with Americans, the Cherokee Nation was deteriorating.

For instance, Cherokee family structures were changing, vast amounts of lands were being ceded to Americans, and Cherokee Indians were forced from their lands. Overtime, this constant chipping away at the Cherokee Nation, lead to the final Indian removal from homelands and the demise of the Cherokee Nation in southeastern United States. References Adair, James. (1930). Adair’s history of the American Indians. Johnson City, Tenn. : Watauga Press. Canouts, Veletta, and Goodyear, Albert C. (1985). Lithic scatters in the South Carolina Piedmont. In Structure and process in southeastern archaeology, ed. 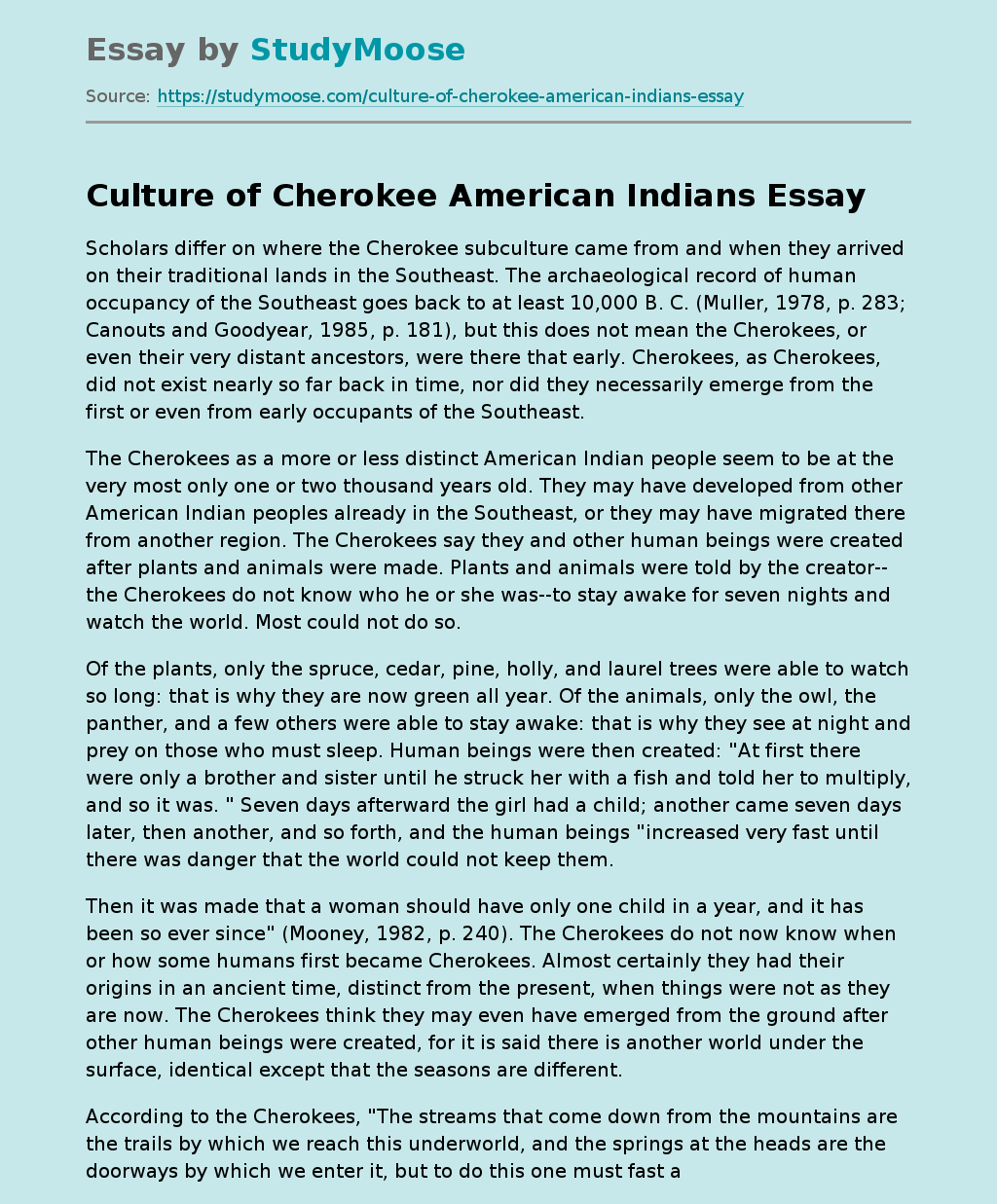