Superstorm Sandy was a hurricane that occurred late in the hurricane season that turned into a huge tropical storm. Sandy was first associated with a tropical type wave that left the western coast of Africa on October 11, 2012. As the wave was moving toward the United States it hit a large upper-level trough over the eastern Atlantic on October 12 and 13th. This produces a very large area of rain showers and Thunderstorms, but it was considered to strong to develop into something bigger.

Don't use plagiarized sources. Get your custom essay on
“ Hurricane Superstorm Sandy ”
Get custom paper
NEW! smart matching with writer

As the wave was continuing to move across the Atlantic Ocean, the wave passed near a pretty week disturbance that was pre-existing from Hurricane Rafael within the Intertropical Convergence Zone. By October 17 the two systems became very difficult to determine which system was which.

As the thunderstorms started to come together to form curved bands, Sandy turned into a tropical storm with winds topping at 39mph. Sandy was located in an area that had very warm water, very weak winds and strong tropical moisture. On the 23rd of October the winds began to increase to 60 mph and Sandy was moving north towards Jamaica. By this time, it was developing an eye.

On October 24 at around 11 am Sandy was considered a hurricane as the winds rose to 74 mph.

At 3pm, Sandy made landfall on the island of Jamaica. Despite making landfall, the pressure declined very quickly and the winds kept growing to 90 mph. The storm then headed toward Cuba where it made landfall as a Cat 2 hurricane. As the hurricane crossover Cuba’s landscape, the storm decreases to a Cat 1 hurricane. Even thought Sandy’s movement through Cuba took a major toll on the strength of the storm many forecasters were worried that the storm would become reenergized as it moves north.

Sure enough, as the storm moves north it hits a trough of low-pressure that has originating in the mid-latitude areas. ‘The trough would ventilate the storm, and cold air in its core mixed with the warm tropical eye of Sandy, created a temperature gradient in upper levels. These gradients have the ability to sustain large cyclonic vortices within the mid-latitudes.’ (Halverson and Rabenhorst 2013) This was shown by the models that said that Sandy would turn into a hybrid type storm. On the 27th the cool air from the Northeastern part of the United States starts to wrap towards to the middle of the storm.

Sandy begins to transform to an extratropical cyclone because the cold air is starting to affect the warm core of the storm. Sandy is now considered a full hybrid storm. On the 28th Sandy was maintaining an inner-core that you would typically see in a hurricane, except the winds grew by a factor of 4 which made the storm the size of a massive Nor’easter (a macro-scale cyclone occurring along the upper East Coast of the United States and Atlantic Canada.) Sandy then took a very rare left hook towards the Mid-Atlantic region. ‘This exceptionally rare ‘left hook’ was being driven by two factors: (1) a strong trough of low pressure over the Carolinas, with counterclockwise winds aloft, and (2) a blocking ridge of high pressure over Newfoundland, with clockwise rotating winds. Sandy was like a cog stuck between two very large gears, acting to pull the storm inexorably inland.’ (Halverson and Rabenhorst 2013) Superstorm Sandy finally make landfall by slamming into the Atlantic City as a Cat 1 hurricane on October 30th 2012.

There are many scientists that can’t answer the question of did climate change help create Hurricane Sandy. What can be determined is the climate change most likely help Sandy’s impact even worse that it could have been. The water temperature in the Eastern coast of the US was very warm during the summer of 2012. The sea temperature of the coast of the Carolinas and the Mid-Atlantic region stayed considerably warm in the fall season, which maintain a very good energy source for a storm like Sandy. Since hurricanes need the water temperature near the mid to upper 80s to thrive, this was a very odd anomaly to happen in late October. The water anomaly could have been because of global warming. Warmer water will provide much more water vapor than colder water. This will provide storm systems to contain heavy rainfall that can turn into severe flooding. The aspect of the storm that was most damaging was the huge storm surge that hit Massachusetts to Maryland.

The movement of the storm which was east to west is the exact opposite of how the weather systems move in the area helped create such a massive storm surge because the easterly air flow impacted the coastline at a right angle. The airflow in the Atlantic Ocean was blocked by a massive area of high pressure that was located near Greenland and a separate storm system the was leaving the area lead to Sandy having no escape route away for the US. This blocking pattern happened at the wrong, as Sandy was leaving the Caribbean. ‘Weather Channel hurricane expert Bryan Norcross wrote about this on Oct. 26. ‘The freak part is that a hurricane happens to be in the right place in the world to get sucked into this doubled-back channel of air and pulled inland from the coast,’ he said. ‘And the double-freak part is that the upper-level wind, instead of weakening the storm and simply absorbing the moisture, the upper winds are merging with the tropical system to create a massive hybrid vortex.

A combination of a hurricane and a nor’easter’ (Freedman 2012) If Sandy had made landfall earlier in the day the storm surge would have been much lower than it was. ‘Due to the lunar impact on tides, even a change of a week in storm timing would have meant a lower tide.’ (Robinson 2016) With Superstorm Sandy being such a massive event considering the major impacts it had on the natural environment and the northeastern part of the United States, there has been changes in how forecasters predict storms. The National Hurricane Center has determined different languages to their watch and warning criteria. There has also been a change to the zoning of homes and businesses that push them away from the shoreline. I think everybody who witness this massive Superstorm can develop a much bigger appreciation on how the power of Mother Nature can affect the citizen on Planet Earth. 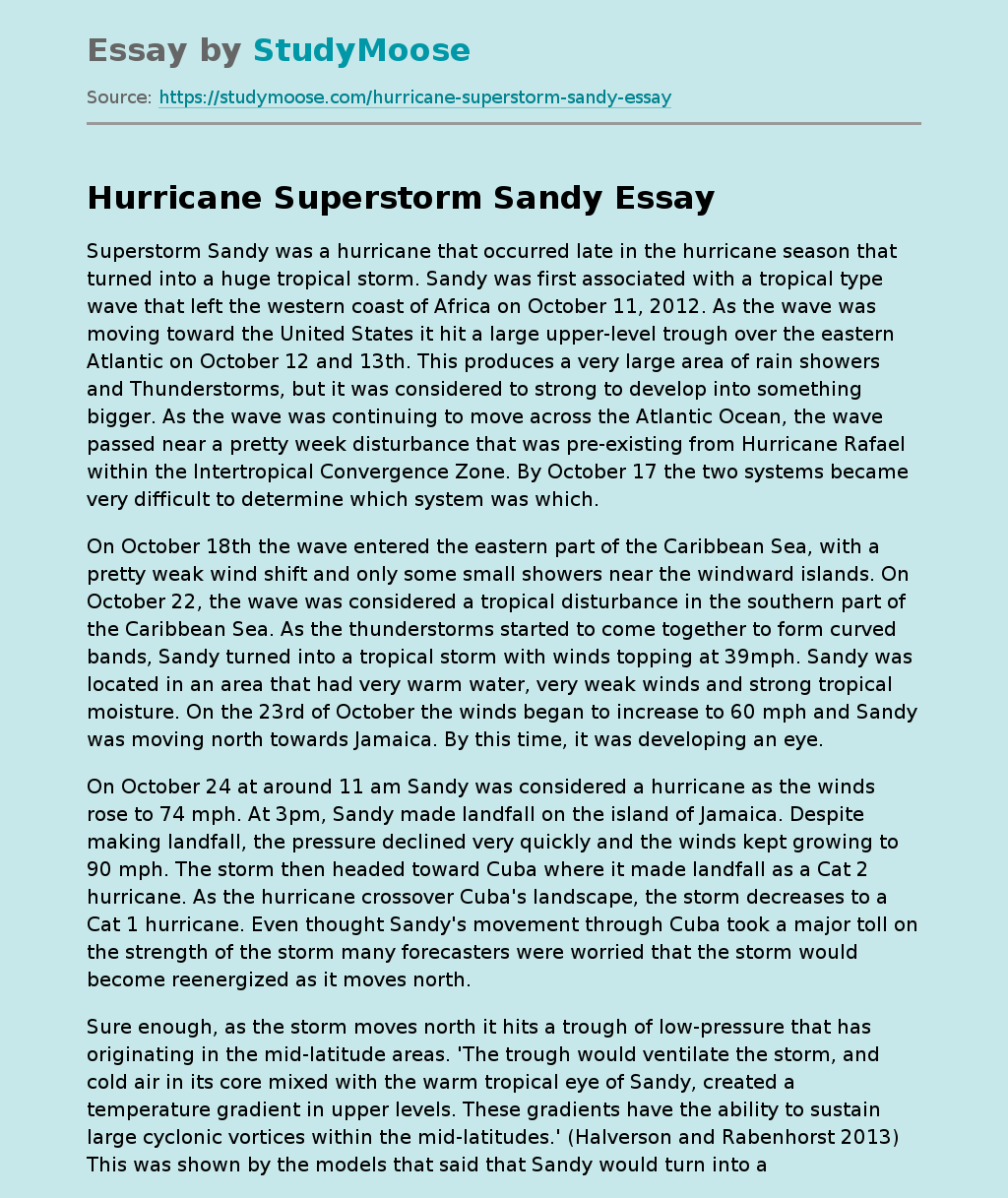