The Hunger Games by Suzanne Collins had me interested because it deals with a sixteen year-old girl that goes through a drastic change after some events that happen in her life. The Hunger Games is about a girl, Katniss, that volunteers to take the place of her 12 year-old sister, Prim, in the Hunger Games.

The Hunger Games is a televised event in which a boy and a girl between the ages of 12 and 18 from each of the 12 districts of Panem, is randomly chosen each year to fight to the death against the other 23 participants, or more commonly known as “tributes.

Don't use plagiarized sources. Get your custom essay on
“ Hunger Games Evaluation ”
Get custom paper
NEW! smart matching with writer

” The tributes are enclosed in a large, dangerous arena that is controlled by the “Capitol.” They must fight to the death and find a way to survive and be the last one alive, to win what are known as “The Hunger Games.” Katniss promises she would win for her sister.

In the end, not only does she win, but her fellow tribute Peeta Mellark which comes from the same district as her, wins as well.

They manage this by acting like “lovers,” throughout the entire event, so that the audience feels sorry for them. I can honestly say that this is one of the best books I have ever read. It gives the genre Fantasy Fiction/Sci-Fi a whole different aspect. I personally do not like that genre, but when I read this one it made me realize that I shouldn’t judge the entire genre just because of one book that I had read in the past.

However, since there aren’t many books based on dystopias it makes it interesting to read about a little something less common in literature.

All in all, this is one great piece. This story is set in the country of Panem, in the future after North America is destroyed due to a series of vague disasters. Panem consists of 13 districts one of which has been completely demolished (District 13). Part of the story takes place in District 12 which is where the main character lives. The book never exactly mentions where the arena for the Hunger Games is, but that is where the rest of the story takes place along with some parts being in the Capitol.

The story is told in the point of view of the main character, Katniss Evergreen. Katniss is a determined, brave, 16 year old girl that has been through a lot. Her father died when she was younger in a mine explosion causing her mother to go into a deep depression which eventually leads to her blocking herself from the rest of the world. Also, she shows bravery when she volunteers to take her sister’s place in the Hunger Games. The plot of this story captures the reader’s attention.

Because it had to do with a dystopia, it makes readers suddenly interested because it is a new topic. Not many books that are directed towards our age group have to do with dystopias. So, since it’s something fairly new to us, it becomes interesting. Also, the sudden twists that the author adds here and there make the story unpredictable which is what many readers, including me, enjoy. It kept me entertained chapter after chapter. The book never has a dull moment, in my opinion. Even though the genre of the book is Science Fiction, the characters are believable. They react just as a regular teenager would react in situations, difficult or not, that they face.

Katniss also changes drastically by the end of the book. She seems to have matured, and looks at life through a different perspective. The characters are also interesting. In between all of the action that happens in the arena, Katniss faces some internal problems. She doesn’t know if she starts to feel real feelings towards Peeta, or if she continues to have those feelings for her friend back home, Gale Hawthorne. I would definitely recommend this book to others. Especially if they want to try and read something a little different, that they normally wouldn’t expect to like. I can almost guarantee that anyone who gives this book a chance, will fall in love with it just as I have.

This book keeps you on the edge of your seat. It’s full of action and suspense that makes you want to read more. In conclusion, I believe that the main character, Katniss, changes a lot from the beginning of the book, to the end. She learns to deal with her internal problems, and looks at life from the eyes of a totally different person. One can say that she has definitely matured. This book left a marvelous impression on me. I am definitely looking forward to finishing the entire trilogy. I would recommend this book to anyone looking to read a fun, suspenseful, and touching novel. They should definitely turn to The Hunger Games. 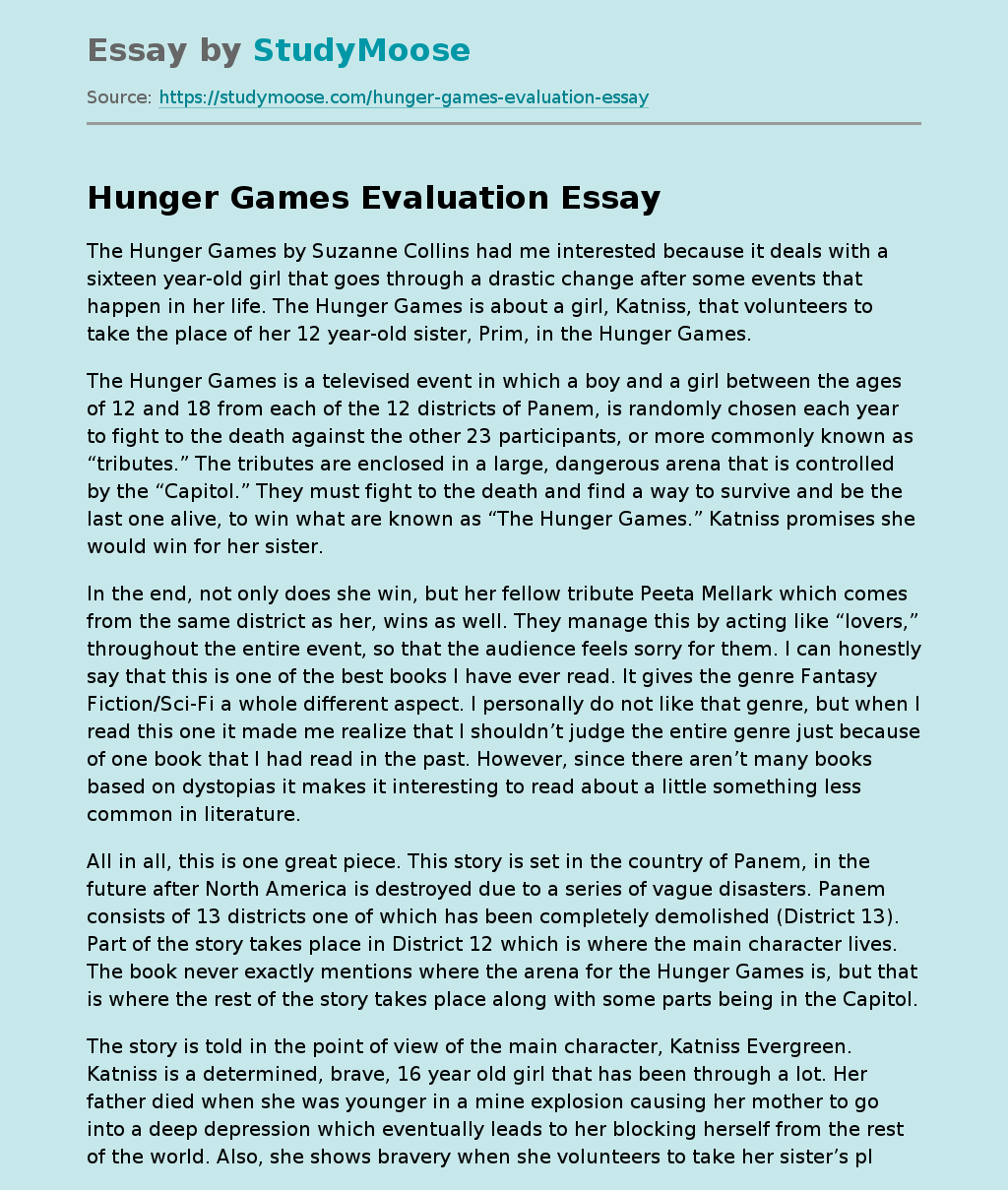