The book and movie of the story The Hunger Games were great! Even though the movie wasn’t exactly alike it many similarities, but only a few differences. In my point of view the book was better. The book had more description, the story line was great, and it was just all around an awesome novel. My favorite parts were the killings in the book, which in the movie they didn’t use the same description and graphic in the movie as they did in the book.

Don't use plagiarized sources. Get your custom essay on
“ Hunger Games Book vs Movie ”
Get custom paper
NEW! smart matching with writer

One of the kills that really stood out was one of the first when a girl lit a fire in the forest and the group that Cato led attempted to kill her but failed in a way they had sent Peeta back to finish him off in the book. In the movie they killed her right away. One of my favorite characters from district 11 was named Thresh his death was sad. But before he died Katniss the main character from district 12 took care of Thresh’s tribute partner so Thresh saved Katniss’s life.

Katniss was running to get a package to save Peeta from dying cause she was really starting to care about him.

This girl came up behind her took katniss to the ground and was playing with knife she was going to kill her with, when thresh came up and took her off Katniss and beat her to death, then spared her life. Later, the games were taking so long they released hungry savaged dogs to hopefully speed up the games.

They got to Thresh first as soon as his death the sound of a cannon went off to signify his death in the book, but in the movie Cato killed him. Another death, in which I was excited for in the movie, was Cato’s death.

Cato was the antagonist in the story, the leader of a group of people that train their whole lives to participate in the games. In the book Peeta, Katniss, and Cato are the final three tributes. Peeta and Katniss were walking and randomly a dog starts chasing them so the run to the cornucopia, a place where weapons and shelter is, Cato is waiting thee for them so he can kill them and win the games. Well Peeta and Katniss run and get the top, Cato’s just waiting there for them Peeta Runs at him to fight him. They fight and Peeta throw him over the edge to get attacked by the savage dogs.

The book says that he lay there screaming and suffering for hours on end, the next morning is when he is relieved by Katniss shooting him in the head to end his life. In the movie She kills him immediately after they knock him off the edge. I was looking forward to him dying he was one of my least favorite characters. All in all the movie and book were both magnificent I would prefer reading the book first then comparing differences, the movie had many similarities, Too many to explain. Over all there weren’t very many differences, mainly it was only deaths that were different. P 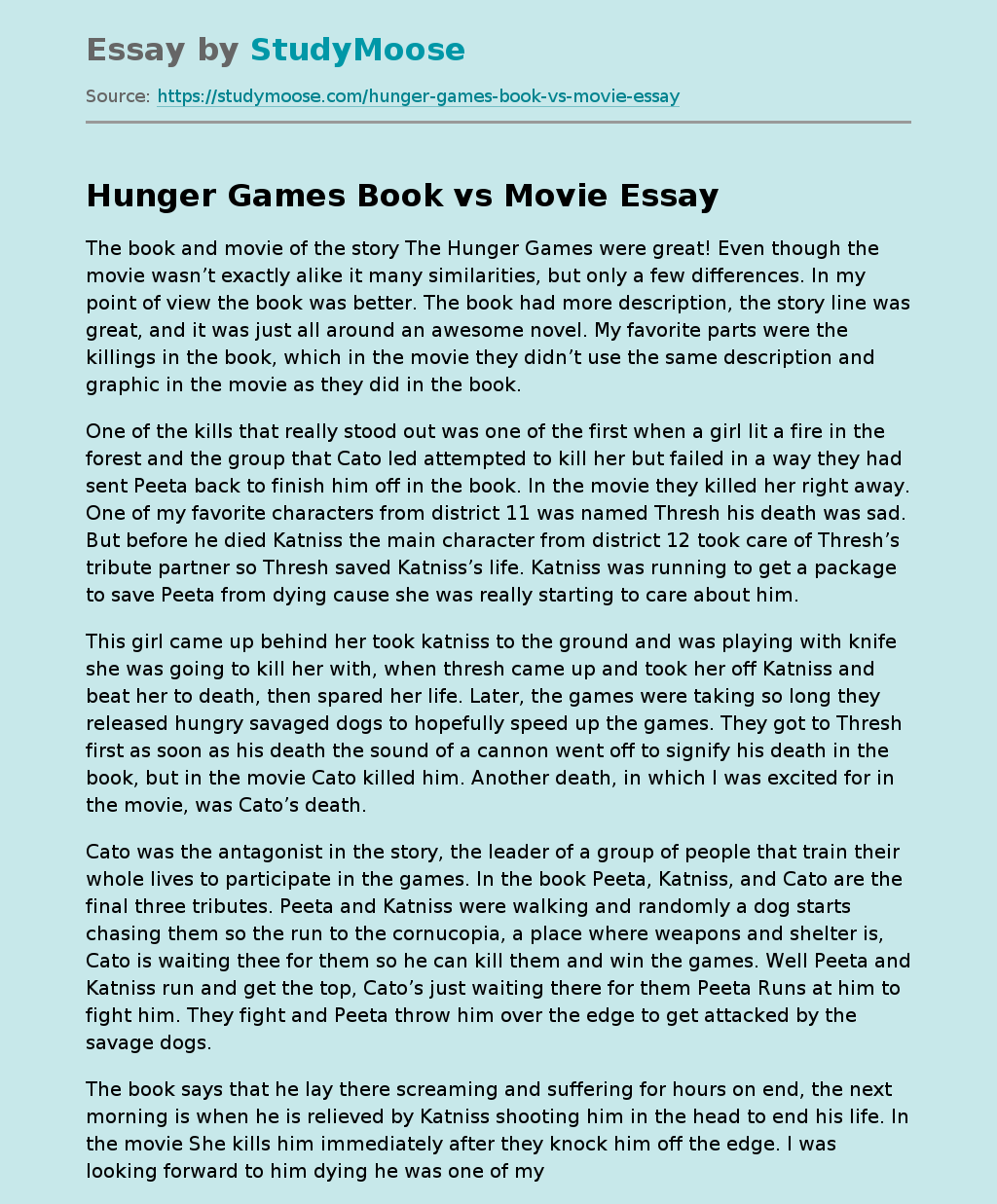