Human Nature is essentially evil in Lord of the Flies

During the 1950s when Golding had written Lord of the Flies war and conflict was amongst them. World War Two had recently ended and there was strong tension between Russia and the West. Russia and America had been building up nuclear weapons since the 1930’s, believing that these weapons would protect them from attack. This is known as the Cold War. In the book Golding constantly gives us hints that war is going on, for example when Piggy reminds Ralph that the plane crashed because they were attacked.

Don't use plagiarized sources. Get your custom essay on
“ Human Nature is essentially evil in Lord of the Flies ”
Get custom paper
NEW! smart matching with writer

The adult world at the time was full of evil and hate which is shown in the book. For example Hitler, whose aggresive ways seem to mirror the actions of Jack, who throughout the novel builds up power, eventually forming a ‘dictatorship’.

When the boys arrive on the island the situation is calm. From the beginning we start to see some of Jacks dictitorial traits, this shown by the introduction of the ‘choir boys’ and him wanting to be chief.

Most of the boys side with Ralph and elect him as leader. Jack is also described as having red hair, which is often used to portray someone with a fiery personality. Jack is the character who has largest appetite to kill; his highest ambition towards the beginning of the book is to kill the pig. Later on in the novel Roger show clear signs of mounting agressive behaviour. In the beginning he started to show his agression by knocking over sand castes built by the ‘little’uns’ as the novel progresses his actions become ever more violent ending in him killing piggy.

Ralph and Piggy unlike Jack believe in fairness and democracy, the conch and piggy’s glasses play an important role in keeping order and sanity within the boys. Towards the end of the novel both of these important items are destroyed. Golding shows that human nature is evil by making the two sainest characters join in the killing of Simon. The glasses symbolised intelligence and thought so when they were destroyed Ralph often metions a ‘curtain’ meaning he can’t think clearly.

The beast is first ‘sighted’ by a ‘little’un’ who said he saw a snake like beast in the night that turned out be a creeper when daylight returned. This ‘beast’ is probably the most important factor in book because it symbolises ‘fear in the heart of man’. Initially the boys take no notice of this ‘little’un’ but as time goes on’ other boys believe they have seen the beast but in a different form. Jack tries to show his bravery by offering hunt down the beast. Ralph tries to be rational and explain that there is no such thing but he has difficulty persuaded the other boys.

Jack and Ralph believe in totally different principles with this in mind Jack forms his own tribe who are there to hunt and have fun, were Ralph requires the boys to tend to the fire and build shelters. The boy’s fear of the beast increases aswell as the boy’s savage behaviour. The boys regularly perform a tribal dance with one the boys pretending to be a pig dancing and chanting ‘kill pig, cut his throat, and spill his blood’ this chanting is both primitive and pagan. Whether real or imaginary the beast is present in all, it represents what Ralph calls ‘the darkness I mans heart’ this shows that the beast is capacity for evil and wrong doing in all of us.

Law and order disintegrates gradually, as the fear of the beast becomes more real over time. The conch and piggy’s glasses were the centre of law, order and democracy so once they were desroyed democracy and order andhad gone with it.

Were nearly all of the other boy’s show that human nature is essetially evil, there is one character that stands out for goodness and innocence which is Simon. Simon is shown to be unconventional; he is also thoughtful and kind. He is shown to be good till the end. He often will just go off on his own which eventually puts him it great danger because once he wandered off during the night and a ‘little’un’ saw him and believed him to be the beast. Golding was a very relious man, some people think that Simon represents Jesus.

He dies because he tries telling the others the truth about the soldier whom they believe is the beast but they don’t care. He has a conversation with the Lord of the Flies which represents the confrontation between good and evil. Some of the words that Golding uses when he is talking about Simon describe religious scences; the candle bud’s open wide as he sits alone in the forest at dusk which makes you think of church candles. He is the true exception in this book the one that is truly good.

Human Nature is essentially evil in Lord of the Flies. (2017, Sep 27). Retrieved from https://studymoose.com/human-nature-is-essentially-evil-in-lord-of-the-flies-essay 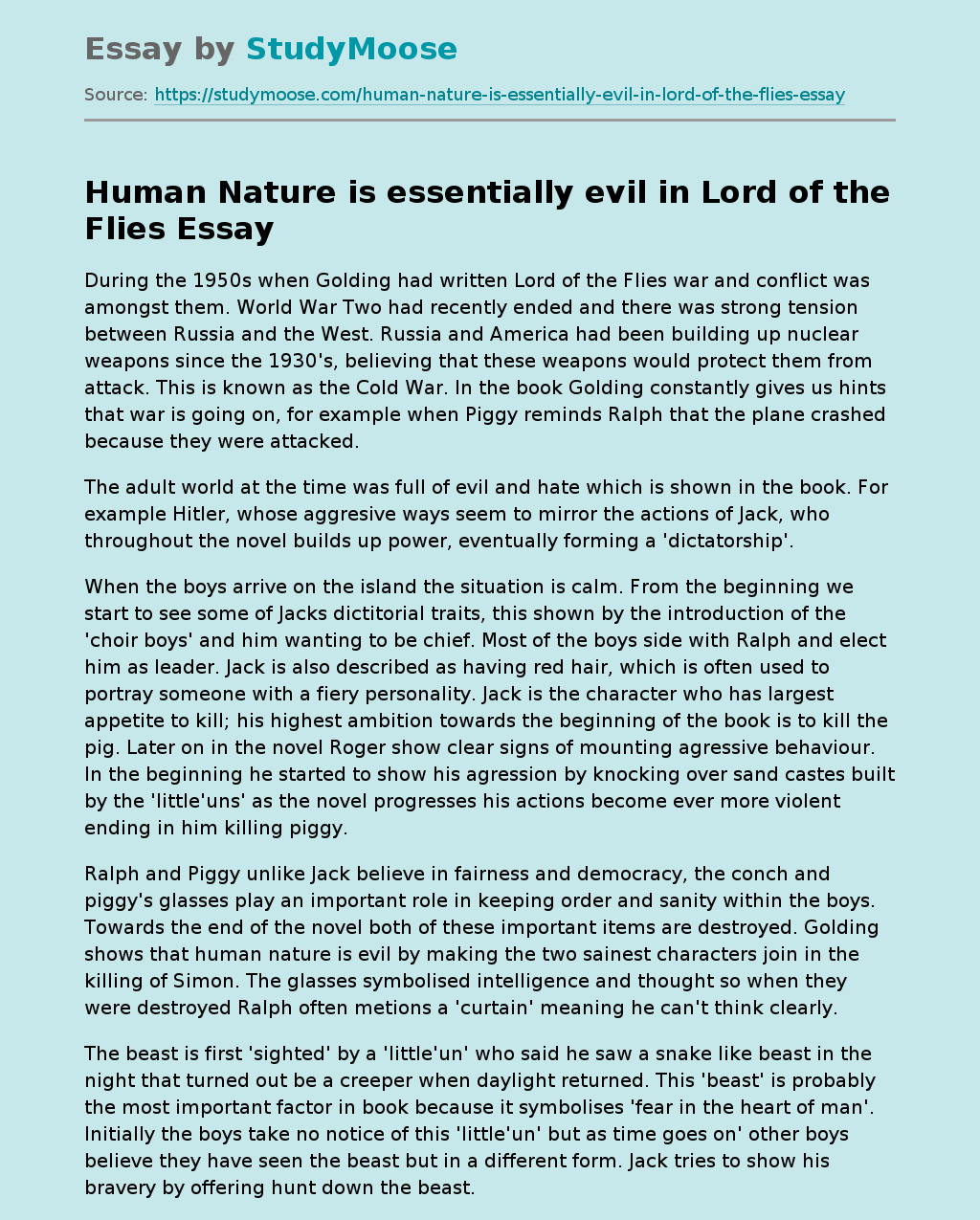