Human Nature in The Great Gatsby

Human nature refers to the general psychological characteristics, feelings, and behavioral traits of humankind, regarded as shared by all humans. F. Scott Fitzgerald with the use of selection of detail, selective diction, and imagery, portrays both condescending and bona fide aspects of human nature. Death brings denial, memories, remorse, and perspective. To Nick Carraway, who is utterly incredulous and lachrymose over Gatsby’s death, the passing-away of a dear friend is a period of reflection.

Denial is the most prominent psychological aspect following one’s death.

Don't use plagiarized sources. Get your custom essay on
“ Human Nature in The Great Gatsby ”
Get custom paper
NEW! smart matching with writer

“Gatsby’s house was still empty when I left. Fitzgerald implies that Nick is waiting upon Gatsby’s return — the return to normalcy. But the period of stagnation lingers and Nick continues to reminisce on the past. Fitzgerald invokes imagery by appealing to the five senses. Nick is trying to relive the condition of Gatsby’s infamous house parties by spending his Saturday nights in New York. The “gleaming, dazzling parties” draw out the visuals of a celebratory scene.

The “music and the laughter, faint and incessant” excites the aural senses and characterizes the mood of the party. Nick begins to notice the most dismissive and discreet details.

He acknowledges the length of the Gatsby’s unmanaged lawn as compared to his, in which he posed little to no interest prior to the death. Juxtaposing his brief observation is one far more conspicuous. “ One of the taxi drivers in the village never took a fare fast the entrance gate without stopping for a minute and pointing inside…perhaps he had made a story about it all his own.

” Nick takes to mind the change in attitude and persona of those who were acquaintances of Gatsby. His death brings a cessation to lively parties and expansive gifts. Therefore, they who once lauded and idolized Gatsby, act as if one has never heard of him.

The cruel and selfish face of human nature proves to be nothing less than pathetic. Nick concludes Gatsby’s story by paying attention to the green light and reminiscing Gatsby’s extraordinary spirit and pursuit to come as far as he did. “Gatsby believed in the green light, the orgastic future that year by year recedes before us. It eluded us then, but that’s no matter –– to-morrow we will run faster, stretch out our arms farther…so we beat on, boats against the current, borne back ceaselessly into the past. ” Gatsby’s spirit and passion will continue on in those who remember him most.

Human Nature in The Great Gatsby. (2016, Sep 26). Retrieved from https://studymoose.com/human-nature-in-the-great-gatsby-essay?post 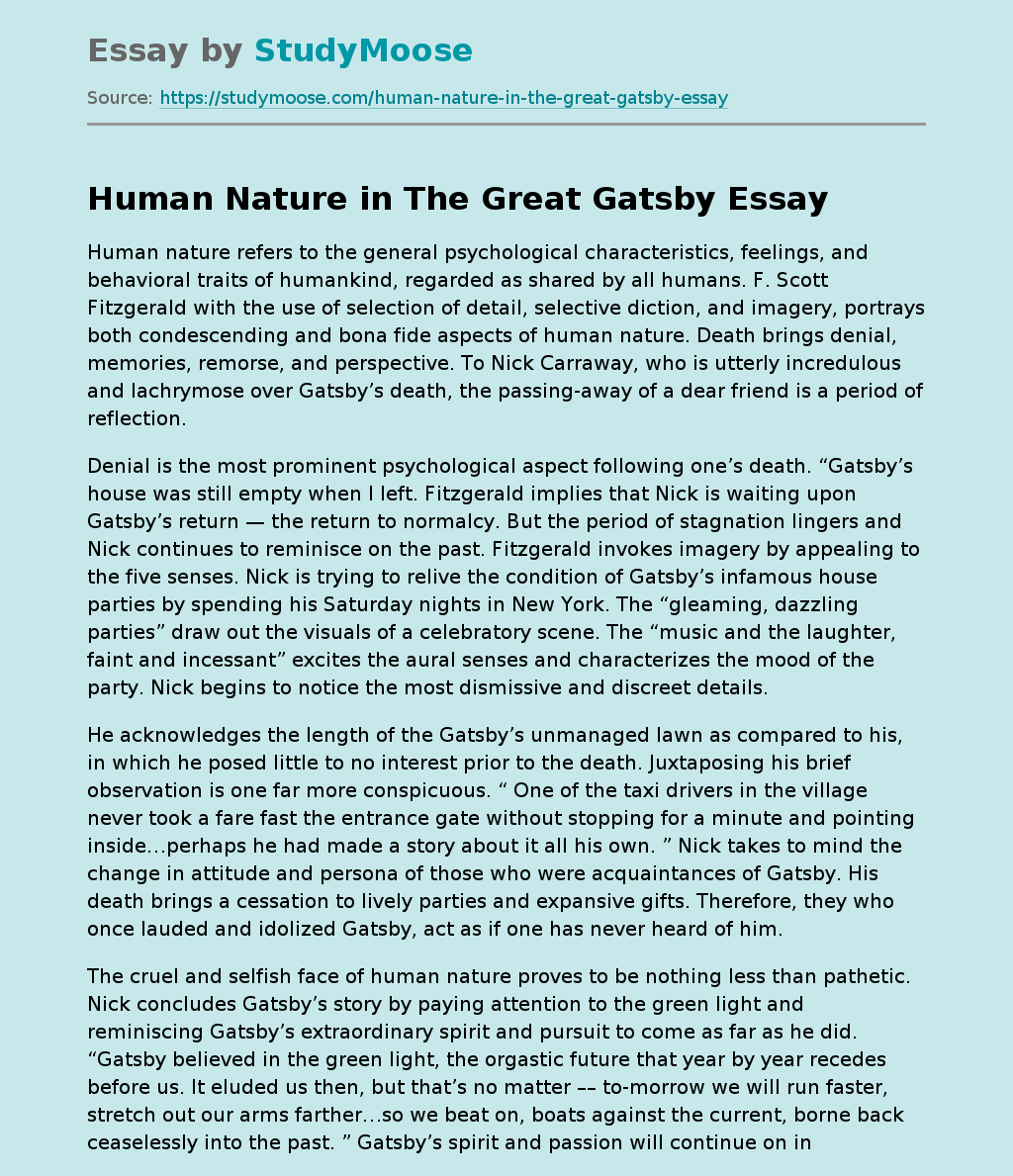