The human condition is a term which references our complicated existence by highlighting our ongoing ability to adapt and change both our perceptions and values. Through our mental capabilities of both creativity and imagination, humanity is able to achieve a sense of both self-actualisation and liberation, resulting in them acting as the core of our existence where, without them we would become susceptible to the overwhelming flaws of the human condition.

Evidencing this are the three texts, ‘Dejection: an Ode’, ‘This Lime Tree Bower my Prison’ and ‘Focus’, which Samuel Coleridge’s “Dejection: an Ode,” is a poem describing a man’s torment as he attempts to overcome his dispirited state as a result of the loss of a romantic relationship.

Turn in your highest-quality paper
Get a qualified writer to help you with
“ Human Condition Essay ”
Get high-quality paper
NEW! AI matching with writer

The poem highlights the importance of creativity within humanity through the persona’s struggle to maintain joyous after the loss of such ability, presenting the fact that without creativity, we would become susceptible to the negative aspects of the world.

Beginning the poem using pathetic fallacy, Coleridge relates the persona’s reality to the growing storm, which through describing the “dull pain” received from his loss, highlights the duality present within our emotions, and hence the idea that we have the ability to experience both love as much as we do despair. The poet again reinforces our vulnerability to reality by using a metaphor to describe how it “coils around my mind,” presenting the fact that without hope and optimism, reality can hinder our creativity.

Describing that he was born with a “shaping spirit of imagination,” the persona alludes to the idea that humanity maintains the ability to bring about their own happiness, which as a whole, demonstrates to the audience that life can only ever be worth living when we have found our own contentment and joy, as encountered only through our imaginative pursuits.

As the poem concludes, the importance of maintaining happiness is reiterated as the persona wishes his lover to rejoice, asking for joy to become the “eddying of her living soul,” which again expresses the concept of inner contentment, which at times can only be found through creativity, as the core of the human existence. Coleridge’s ‘This Lime Tree Bower My Prison’, is a poem describing a man’s changing views as he contemplates the natural word which he has been prevented from seeing.

Coleridge’s poem demonstrates the ability of individuals to modify their morals and values upon receiving a cathartic release from their relationship with nature, as predicated almost entirely on the imagination. Through allowing the persona to visualise the encounters his friends are making with nature along their journey, Coleridge first demonstrates the capabilities of the imagination in allowing us to picture things in certain detail, as shown through “now my friends emerge,” which in all exemplifies the presence of imagination in our relationship with nature.

Furthermore, the description of their journey demonstrates the liberation received from engaging with nature, as shown where they “wander in gladness,” which relates to the cathartic release obtained from viewing nature that pushes us to reassess our ideas and perceptions.

By showing his gradual change in tone, the influence of the persona’s imagination is shown, which when in conjunction with his exclamation of “yes!” reveals our emotional capabilities if becoming engulfed in our imaginations of nature. Also, by choosing to allow the persona to speak in a melodramatic tone, the poet is able to again explicitly demonstrate his overwhelming feelings from picturing various landscapes, as seen in the alliteration “silent with swimming sense,” which further reveals nature’s ability to liberate our senses.

Similarly, Coleridge’s conclusion to the poem, which involves a reflection of the persona’s realisations as he contemplated the beauty around him, provides a retrospective view of experience and what he “henceforth shall know,” which ultimately reveals humanity’s capabilities to both adapt and change their morals and values through perceiving new ideas and perceptions. Ari Kruger’s ‘Focus,’ is a 2011 short film depicting the changing perceptions of a young man as he enters and loses a romantic relationship.

The film portrays the inevitable presence of flaws within the human existence, while simultaneously recognising the natural beauties that are still present. The concept of being unable to decipher things beyond the obvious is first received by Kruger’s choice to film in black and white, which in conjunction to the man’s struggle to continue to see the positive traits of his partner, highlights humanity’s inability to, at times, see beyond the realm of ‘black and white’ and hence recognise the more ‘colourful’ aspects.

The man’s growing blindness over the beauties of his relationship due to an unnamed flaw is successfully conveyed through the use of camera focus to gradually blur the young girl until she is ultimately unrecognisable, which mirrors the consequences of choosing to focus singularly on the imperfections of humanity and overlook the positive attributes. In the shot where the girl looks grumpily along as he uses his computer, the device is seen as a metaphor for the technological advancements or barriers which have hindered his appreciation of all things natural, namely the positive traits of his partner.

Parallels with this exist within Coleridge’s ‘This Lime Tree Bower My Prison,’ where the persona is blinded from feeling the beauty of nature by his resentment, describing how it had ‘dimmed mine eyes. ’ The superiority of those who recognise both the beauties and flaws of humanity can be seen through the higher positioning of the girl on the bed as the man sits on the floor, further highlighting the importance for ourselves to similarly do so.

Through creating a parallel between the beginning and end of their relationship, Kruger demonstrates that despite the melancholy tones of the last scenes, the man has now achieved liberation by realising his own flaw as the pinnacle of their conflict, which as shown through the repetition of non-diegetic music, allows us to realise the cathartic release we can only achieve from recognising the dichotomised attributes of humanity.

Although it is complex, the human condition can be simplified into several key aspects that act as the core of our existence, as outlined in the above texts. It can be seen that through creativity and imagination, humanity is able to reach a sense of self-actualisation which allows them to realise the basic flaws of their existence without overlooking its natural beauty. 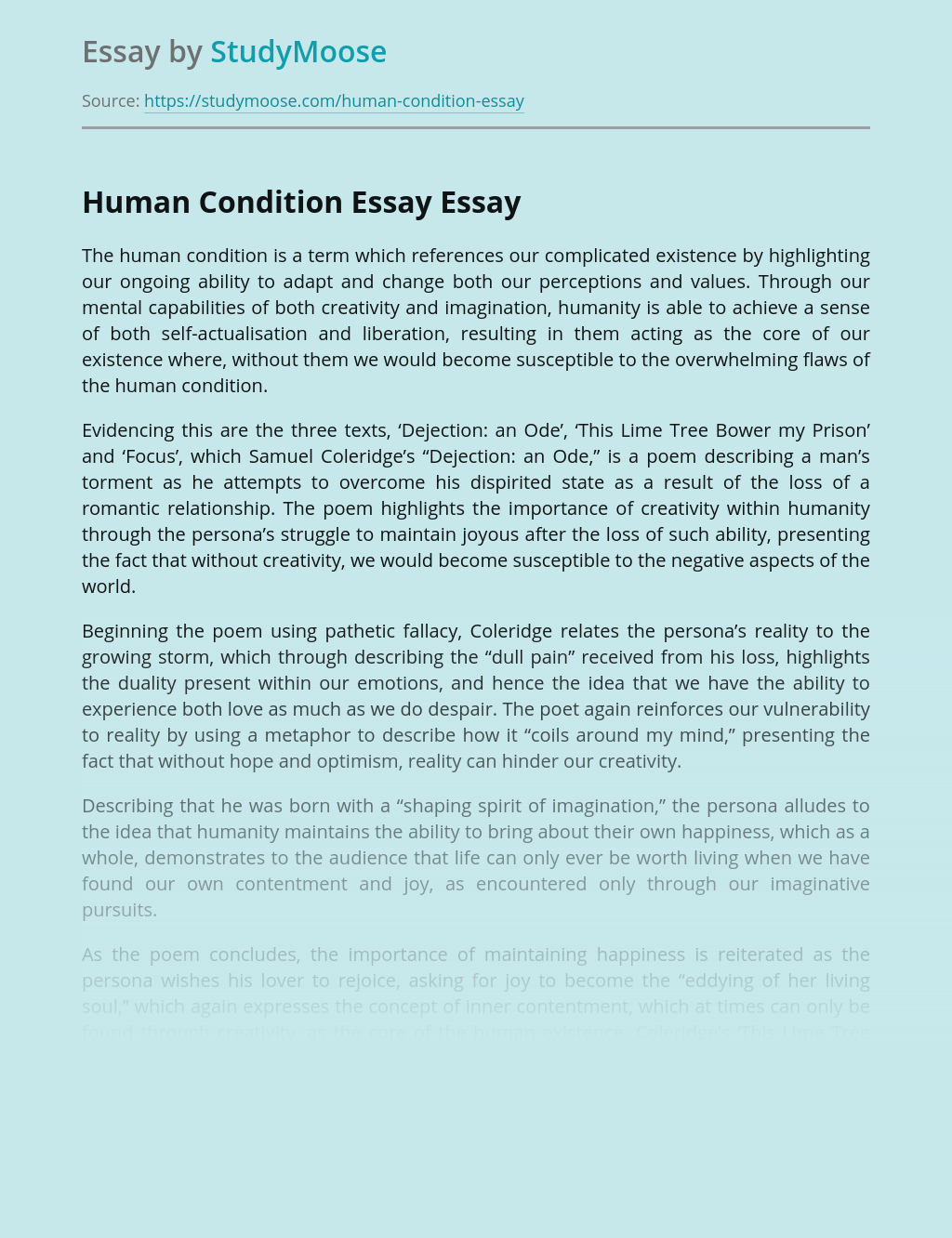 Turn in your highest-quality paper
Get a qualified writer to help you with
“ Human Condition Essay ”
Get high-quality paper
Helping students since 2015
Stay Safe, Stay Original