How Is Mr Utterson Presented in Dr Jekyll and Mr Hyde?

Although Utterson witnesses a series of shocking events, the character is presented as an unenthusiastic and pessimistic Victorian man, and is evident from the very first page of the novel. The text notes that Utterson has a face that is ‘never lighted by a smile’ and only speaks when necessary. In addition Stevenson describes Utterson as ‘dusty and dreary’ and ‘yet somehow lovable,’ which is noticeable in the close relationships he has with his friends. His strong relationships with his friends may perhaps be because ‘his friends were of his own blood or those whom he had known the longest’ meaning his friendships are based on similar personalities and on longevity.

Don't use plagiarized sources. Get your custom essay on
“ How Is Mr Utterson Presented in Dr Jekyll and Mr Hyde? ”
Get custom paper
NEW! smart matching with writer

His monotonous life is represented in the routine in which on ‘Sunday, when his meal was over’ he would ‘sit close by the fire’ and read his bible until the ‘church rang out the hour of twelve’ when ‘he would go gratefully to bed.’

Yet Stevenson presents Utterson as ‘dreary’, he also gives the lawyer many good qualities, such as his loyalty to his friends.

This is evident when he suspects his friend Jekyll of committing criminal activities of blackmail and the sheltering of a murder; however he decides to sweep away what he has learnt and tells a clerk to ‘not speak of this note,’ instead of ruining his friend’s reputation.

Another quality Stevenson presents to Utterson is his willingness to care more about those in trouble, rather than to reprimand them for being immoral: ‘At the high pressure of spirits involved in their misdeeds, and in any extremity inclined to help rather to reprove.

Furthermore Stevenson presents the theme of duality of nature to Mr utterson, which is evident when ‘his blood ran cold in his veins’ at the time when he suspects his friend Henry Jekyll of ‘forging for a murderer.’ The phrase ‘his blood ran cold in his veins’ suggests a possible primitive and animal side to the character, which is later discovered to be possessed by Dr Jekyll as well when Stevenson reveals that Mr Hyde is in fact Dr Jekyll.

In addition Mr Utterson is presented as a character who throughout the novel constantly uses rational thinking perhaps due to his occupation of being a lawyer. His rational thinking and denial of the supernatural is especially noticeable when ‘he attempted to protest again’ after being told that his friend Dr Jekyll was also in fact Mr Hyde, who Utterson sees as an inhuman and grotesque creature.

In conclusion Mr Utterson is presented as the perfect Victorian gentleman who does not gossip, constantly seeks to preserve order and decorum, and guards his friends’ reputations as though they were his own.

How Is Mr Utterson Presented in Dr Jekyll and Mr Hyde?. (2016, Nov 30). Retrieved from http://studymoose.com/how-is-mr-utterson-presented-in-dr-jekyll-and-mr-hyde-essay 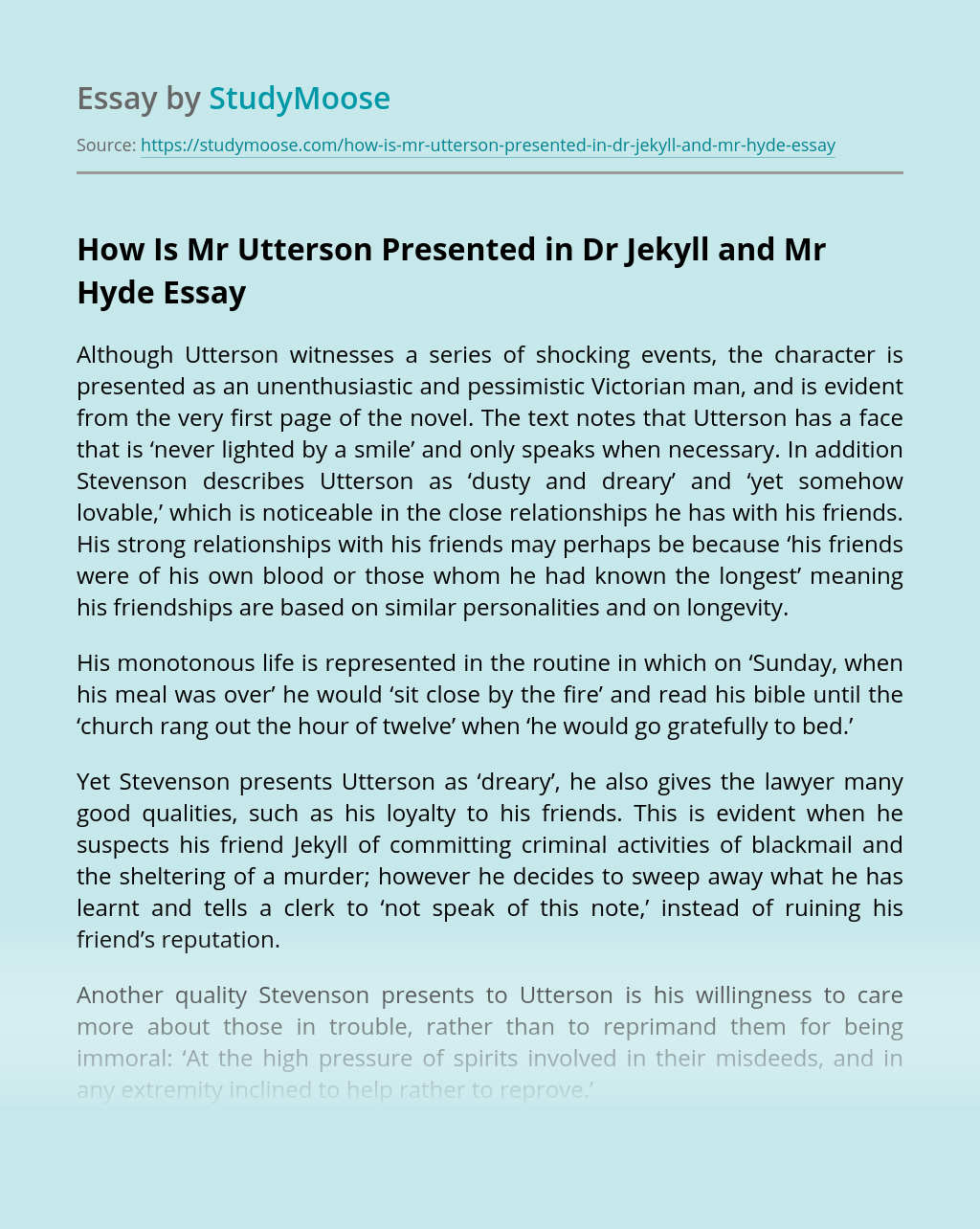