How I Learned to Sweep by Julia Alvarez Essay

1. In which form is the poem written (for example, is it a sonnet? Free verse? Lyric poem This poem was written in 1996 in a conventional style form. The poem has 39 lines.

Don't use plagiarized sources.
Get Your Custom Essay on How I Learned to Sweep by Julia Alvarez Just from $13,9/Page

She is living with her mom because her mom orders her to sweep the floor. 3. Does the poem demonstrate a rhyme scheme? If so, what is it? The poem doesn’t really demonstrate a rhyme scheme. It is written in a pretty straight forward matter. 4. Point out any similes that you find in the poem. How do they contribute to the overall meaning of the poem? There are several similes present in the poem. One is when her mother says she wants to be able to eat dinner off that table.

She was implying to her daughter that the floor was dirty and that it needed to be clean. It was indirectly said. Another simile is when it says, “Her floor was as immaculate as a just washed dinner plate” (Line 13). This implied that she had cleaned the floor so good that it was as clean as a clean dinner plate. Another simile was when it said, “I watched a dozen of them die- as if their dust fell through the screen” (Line 29).

Her exact words were “That’s beautiful”. There is not much personification in this poem otherwise. Personification contributes to the overall meaning of the poem because when you are referencing someone or something that is of importance it is important to tie that to something else that resembles that importance. 7. Point out any imagery that you find in the poem. How do they contribute to the overall meaning of the poem? There are many examples of imagery in the poem. When referencing to the war and how she swept harder and faster after imaging the soldiers dead ashes coming through her TV screen. Much of the imagery found in the poem was the same that was found in the simile and metaphor.

They contribute to the overall meaning of the poem because without imagery one could not relate to a poem. It would be very difficult. With so many examples of imagery in this poem I was really able to imagine the outcome and overall meaning of the poem. 8. Are there other instances of figurative language that you see (metonymy, synecdoche, symbols, archetypes)? Discuss. After looking over the poem several times there were no other instances of figurative language that I could see. 9. Who is the speaker in the poem?

What is the significance of the person who is speaking? The speaker in the poem is the author. It is written in first person. I think the fact that the speaker is the author makes it more real and personable. The story is probably something that the author experienced first hand. It makes it harder to write about someone or something when you haven’t experienced it first hand. 10. What is your personal reaction to what happens in the poem? My personal reaction to what happens in the poem is good. I think she learned a lesson of hard work and doing what you are told. There are people out there serving our country and making sure we are safe and we should do our part to work hard and be good citizens.

How I Learned to Sweep by Julia Alvarez. (2016, Dec 12). Retrieved from https://studymoose.com/how-i-learned-to-sweep-by-julia-alvarez-essay 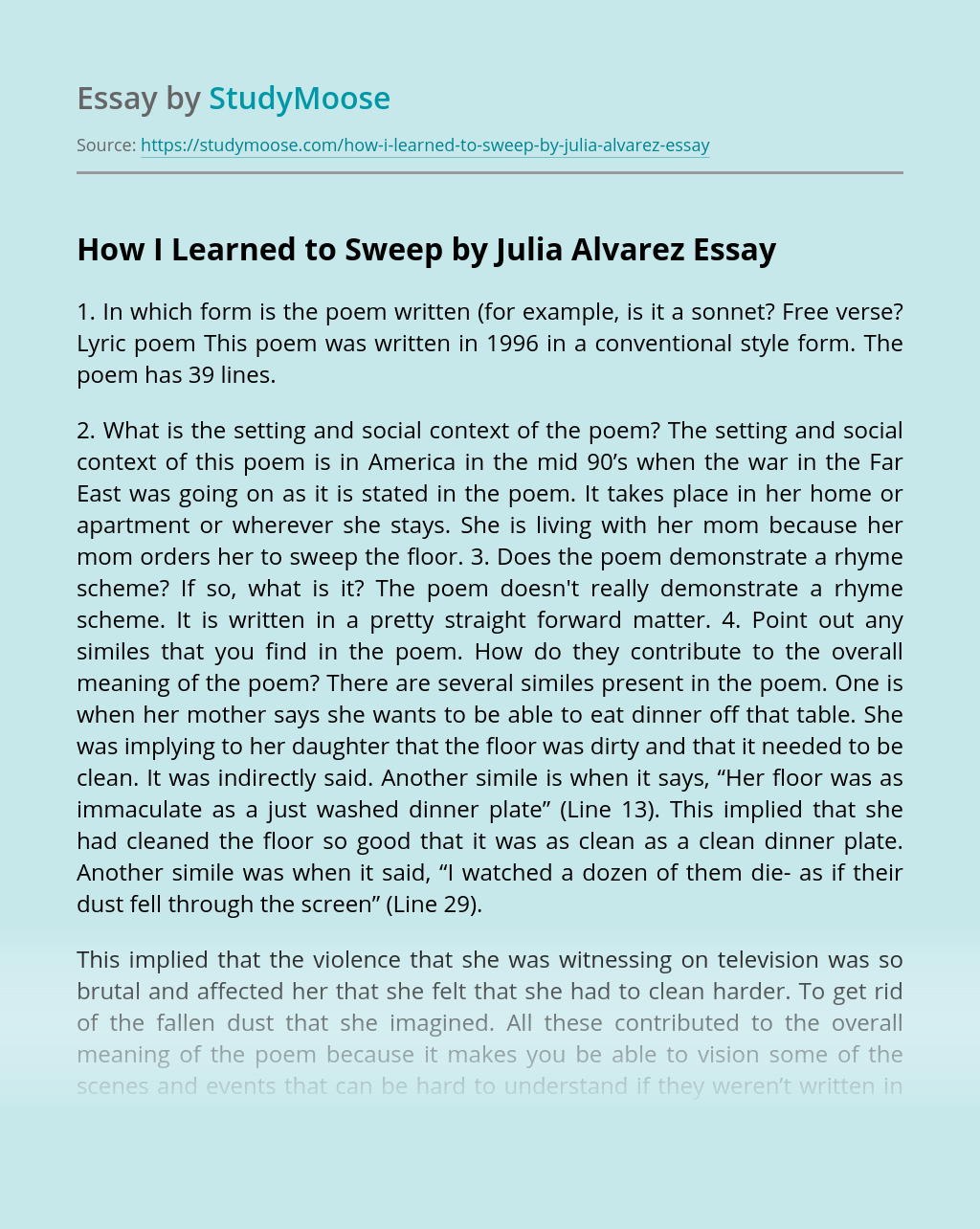