Superior or inferior ? , better or worse ? higher or lower ? questions such as these never arise as long as two things or persons are considered complimentary to each other as are men and women. The two are the basic components of the social set up of which the family is the first, foremost and fundamental unit. A family is made up of a man , a woman and their offspring. Neither the man alone nor the woman may constitute a family. That is why they must enjoy equal rank, status and prestige.

Don't use plagiarized sources. Get your custom essay on
“ Household commodity ”
Get custom paper
NEW! smart matching with writer

But, reality sedom matches the ideal in the human world…… Taking advantage of the innocence and naivette and the loving and trusting nature of woman and his own brutish strength, man reduced the woman to the level of a household commodity, labeled her as the ‘weaker sex’ and assumed the role of ‘ over all master and king’ It is high time to shatter the centuries old myth and to acknowledge the evident fact that WOMAN IS THE STRONGER SEX.

When we compare the strength of two human beings, we have to compare them on different aspects of human strenth, namely- physical, intellectual, emotional and spiritual. Physical strength is mistakenly identified as the brutish strength used in performing violent and inhuman deeds in which menfolk excel. In fact, physical strength denotes endurance and toleration, stamina and perseverance, tireless energy and indefatigable nature, endowments in which women abound..

From the ravages of nature to the pangs of hunger, thirst, aches and pain, women take everything in their stride with smiles on their faces and without any grudge or complaint.

Men work just an eight hour shift just for five days a week and go bragging no end about their strength, stamina and energy while most housewives have been working for eighteen hours or more per day for seven days a week for centuries without even making least effort to fish for a compliment. Till the 19th century, women were deliberately kept out of the intellecual terrain and were considered quite unfit even to express themselves through their literary outputs..

This is why a few of the women who had had the advantage of being brought up in a liberal atmosphere and the encouragement of their family, managed to get their works published, had to adopt a male pseudonym in order to escape social ridicule though their writings were later recognized as some of the masterpieces of English literature. How ironical! Today from science to literature, from medicine to engineering, from business to entertainment industry, from philosophy to politics, from the earth to the space, woman has left her footprints all around to prove her superior caliber in the intellectual field.

Today women are omnipresent in all fields of mental activity and everywhere they are acquitting themselves remarkably well. Just a look at the Board and University examination results these days, in all parts of the world establishes the superiority of women over their male counterparts beyond all doubts because qualitatively as well as quantitatively women are performing far better than their male counterparts. In fact the situation has changed so dramatically that men have almost been reduced to the role of admiring spectators who sit in the spectators’ gallery regaling themselves at the spectacular performance of the star performers

Traditionally women have been considered Emotionally Unstable. , unreliable and immature. Shakespeare’s famous quote, “ Frailty Thy Name Is Woman” had been taken as the true definition of woman. Stories abound in almost all the countries illustrating the pros and cons of trusting a woman with one’s secret . Pernicious propaganda that held mankind in its grip for centuries together Modern Psychology has an entirely different tale to tell. It has established that emotionally men are most unstable and they indulge in indiscreet and impulsive actions so very often.

On the other hand women are much more accommodating and adjusting by nature. Moreover in their actions women are mostly guided by rationality rather than by emotions. Women have a cool and calm temper while men are volatile by nature. Statistics says of the ten suicide cases that take place the world over seven are men while three are women. Since they are emotionally more stable and their actions are mostly guided by reason and good sense, women are certainly better suited for the posts and positions that involve sensitive and critical decisions.

Last but not least, we take up the spiritual side which does not denote any religious activities. By spirituality we simply mean the moral side of human nature i. e. belief in moral principles and strict adherence to them.. Men are the most unprincipled and unscrupulous of all creatures on earth who have for their greed, avarice, lust and passion have performed the most heinous crimes and misdeeds. This is yet another great irony of human history that the law makers themselves were the most blatant law breakers and all the laws of morality were enacted by women..

The moral order if it survived even then, survived largely because of women and a few conscientious men. They may truly be described as the salt of the earth because they preserved and cherished the most cherishable part of human nature and behaviour, human customs and traditions, arts and crafts, cultures and civilizations. From the above discussion, the only inference we can draw is that woman is certainly The STRONGER of the two sexes. 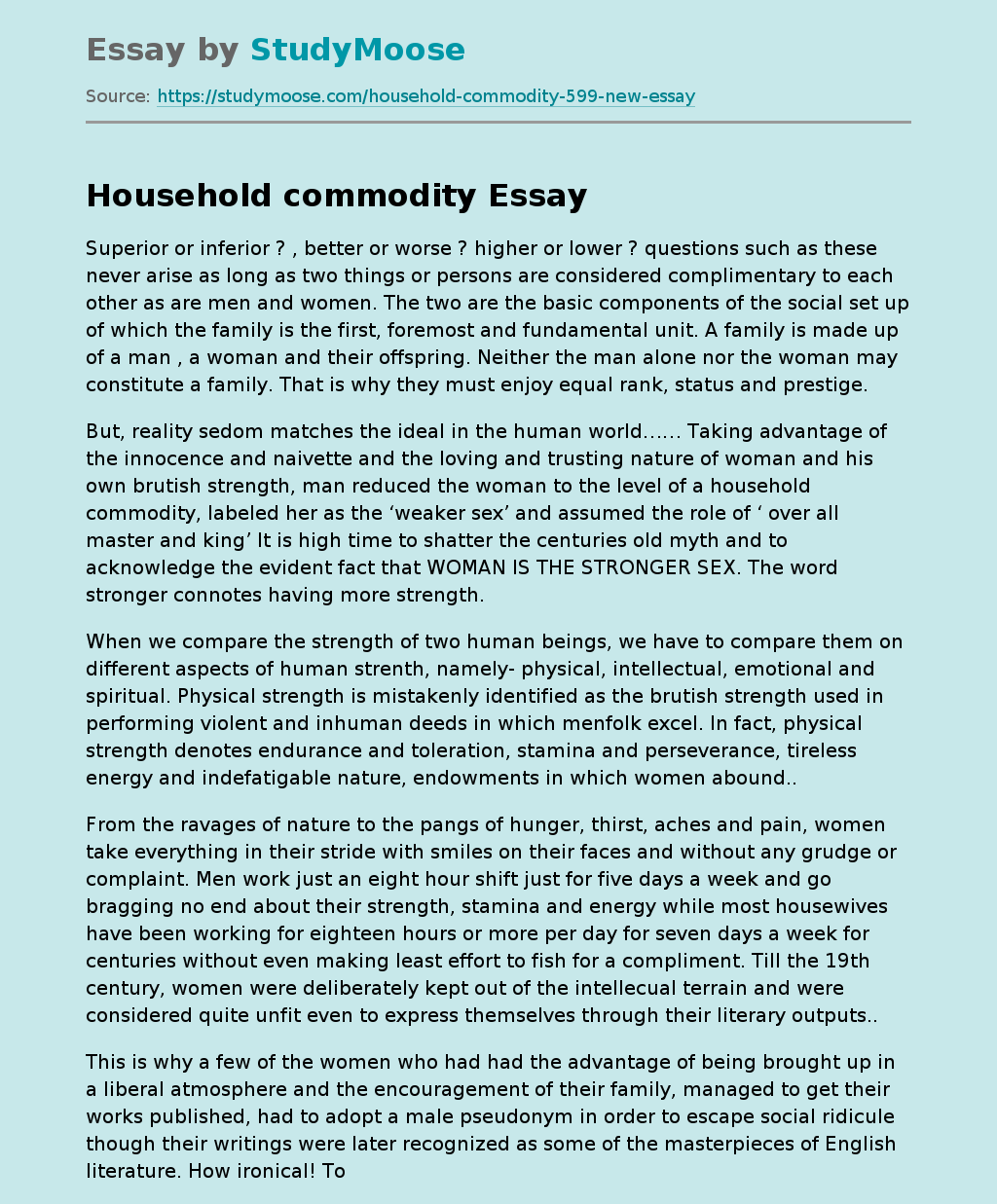