Today was the day before my brother Rodolfo and me prepared to leave from Sicily and begin our journey to America. I don’t know why I feel so heartbroken about leaving, but I know I have to leave because if I don’t things will be worse for me and especially for my family. My oldest son is sick in the chest and I don’t know if ill be able to support my wife and kids if I stay in Sicily because there is absolutely no work and no work means no money, no money means I cant afford to get medicine for my boy while feeding my family at the same time.

Don't use plagiarized sources. Get your custom essay on
“ Hopes and Fears ”
Get custom paper
NEW! smart matching with writer

That’s why it’s vital that I go to America, the land of opportunity!

Where there is always work! So if I could get work once in America then I would make some money and I could afford to feed my family properly, buying the medicine that my son needs so dearly to survive.

Who knows maybe after a couple of years in America I’ll have a good enough job making enough money to bring my whole family over, that’s my dream and something that would make me really happy. I cant wait to go to America I’m so excited and I know that Rodolfo is to, I think he’s even more excited than I am and that’s probably because he’s a young lad looking forward to growing up in America.

I’m really worried about going to America because of the immigration laws in the country and how were going to get in without getting caught, I pray to God everything goes well and that we all get into America safely and most importantly, quietly! I don’t know much about America and its laws on immigration but I have first hand experience of how it is to live in Sicily and right now we Sicilians are being starved to death because of the lack of work. All we have to eat is the sunshine in Sicily and thank god everyday is a sunny day over there.

That’s how bad it is in Sicily right now and that’s why I know that what Marco and me are going to do tomorrow is definitely the right thing to do. I know for sure that if I get into America I’m going to be legit because there’s no way I’m going to spoil anything for Rodolfo or my family by ever taking such a dumb risk in a country that gives everybody so much already! I don’t know how much money people make in America but I what I do know is it’s got to be a million times more than what we make in Sicily right now, which is nearly zero.

My friends say that in America the sky’s the only limit to how much you can make every day, every week, every month and in every year. It all depends on how hard you work, I’m not known for slacking where I come from and that’s a fact. I think Rodolfo will do just fine once were in America and he’ll get a job like me easily because were brothers and no matter how different brothers look, deep down inside they’re the same, if one brothers a hard worker then the others a hard worker! If I start raking the money in from a really good job then I’m going to buy a house or maybe even a restaurant business, which is my dream because I love to cook.

Then I’ll be able to bring the rest of my family in. My wife will look after the finances, I’ll do the cooking and Rodolfo will be the waiter. I think Rodolfo would make an excellent waiter because of his charming personality and the fact that the woman would like him a lot! I really hope that once in America I will become prosperous and not have to continue living in poverty like in Sicily. The only time I might ever borrow money from a loan shark would be if my family’s lives depended on me getting money that I wouldn’t be able to get from anywhere else and that’s something I hope I will never have to experience in my lifetime.

The food in Sicily is the best in the world and I’m really going to miss my momma’s cooking because she always cooked food like there was no tomorrow, it really was that good! I really enjoy making Sicilian food and that’s why I have always dreamt of having my own Sicilian Restaurant. Imagine it, a lowly immigrant comes to America works his ass off to create a better life for himself and his family in America and then this lowly immigrant has enough money to buy his dream, a restaurant business!

It would be a dream come true and I would be eternally happy if it where to happen someday. My momma always knew how to cook up a real feast full of delicacies and I remember when we where young how Rodolfo and me used to love her food so much, she would the most delicious Bolognese it made you eyes water and your mouth drool, it was to die for! Those were the good old days where every man had a job, somewhere to live and his wife could cook him a decent meal everyday like my momma used to do for my papa.

What happened to those days? I wish they would come back some day! I don’t know what the food is like in America but I’m sure it’s going to be totally different from what were used to eating in Sicily. What I want is what everyone else on this Island wants, a bed to sleep in at night, a roof to sleep under at night and at least one decent meal a day, is that really too much to ask for? Over the past few days I’ve been really trying hard to get my English to a better standard, I think it’s quite good already, for a Sicilian that is!

Rodolfo’s English is quite good too and I think it’s just a little bit better than mine even though he doesn’t talk often in English because he’s a bit nervous sometimes. Once we get to America well definitely improve our English and after a few weeks I think people won’t be able to tell the difference between real Americans and us! I hope we never have to feel the pain of being deported back to Sicily. It would be terrible if it where to ever happen, I don’t think I could look my wife in the eyes ever again if I had to go back empty handed.

I would probably kill myself before getting off the boat in Sicily if we ever got deported because I wouldn’t be able to handle the shame of not being able to support my family. There’s no way that I’m going to be able to get a passport once where in America. The only way that I could get a passport would be if I married an American girl but I could never do that because I’m already married! But Rodolfo, he might get lucky and then marry a really nice American girl and then we could all become real Americans! That would be a dream come true.

I don’t know much about America, all I really do know about America is that they have a really big monument called the Statue of Liberty in New York and I’m really looking to forward to seeing it as soon as we get there. I’ve always dreamt of seeing the Statue of Liberty since my papa showed me a card he’d got from a friend in New York. The card had this beautiful drawing of the statue on the front and I’ve always wanted to see what it looked like in my own eyes. Someday I want to start my own Sicilian restaurant business in Brooklyn once I have enough money and when I have brought my family over.

It’s going to be the best Sicilian restaurant in all of New York and all kinds of important people will want to come like the mayor, or famous actors and singers. Once we arrive at Brooklyn harbour were going to stay at our niece Beatrice’s place until we get enough money to rent a room in a hotel or buy our own place. Were so grateful to our cousin Beatrice for helping us out like this because it’s so kind of her to do such a thing and where going to owe here a big favour for this once we’ve settled into life in America.

I really hope that once we get off the boat that we don’t get any trouble from immigration officials but just in case something unexpected happens the mafia guy who’s shipping us all tomorrow told me he’s going to give us all fake papers and ids of dockworkers so that we don’t get any problems once were off the boat. I’ll do anything to make sure we get into America and there is no way were getting turned back. We will even bribe anyone who threatens send us back with all our money because there is no way were going back to Sicily, no way in hell! 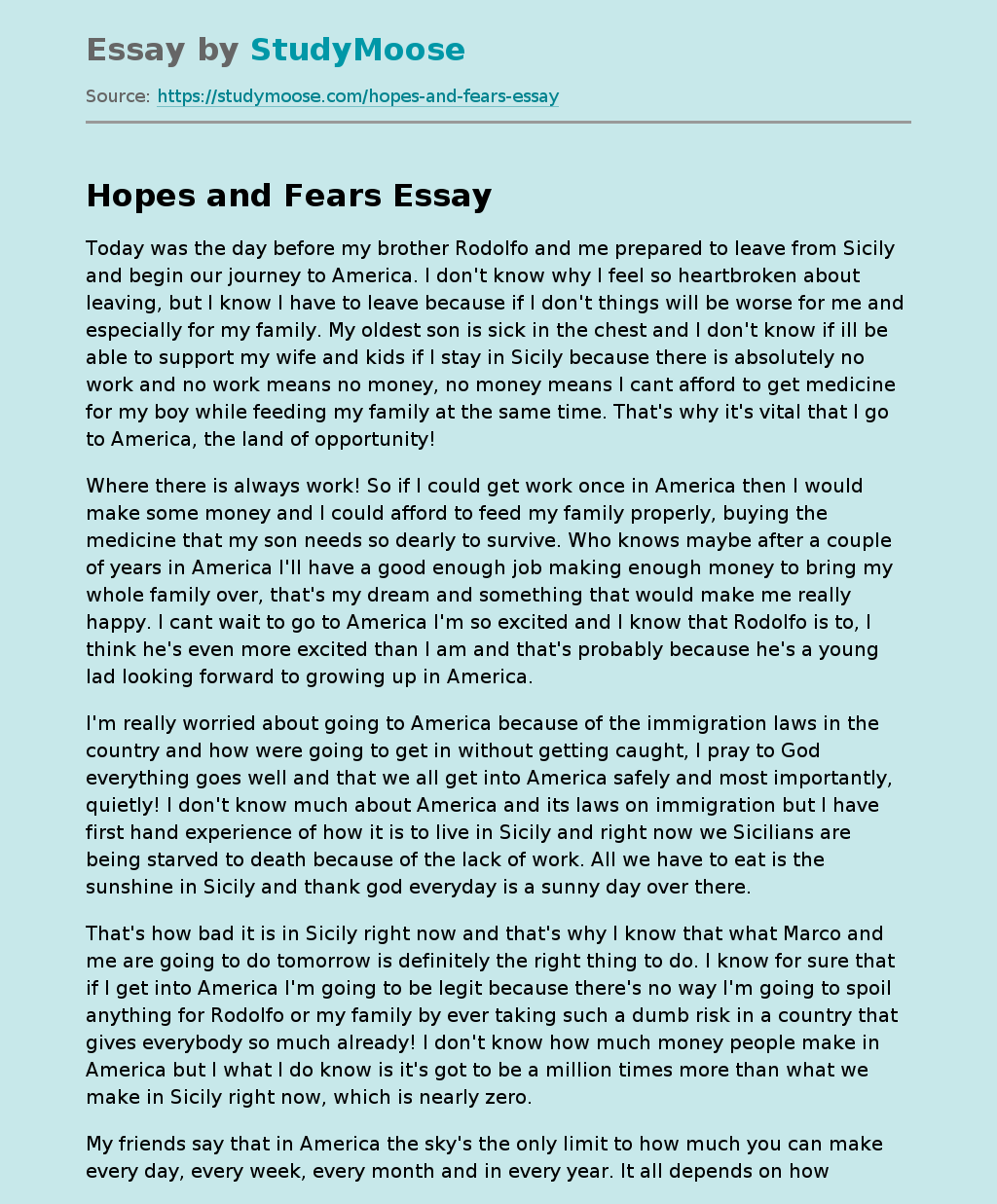