We have recently studied 3 poems ” TO HIS COY MISTRES ” by Andrew Marvell in which he is trying to persuade his mistress to sleep with him using the imagery of love sex and death.

Don't use plagiarized sources. Get your custom essay on
“ “Holy Sonnet”, “To His Coy Mistress”, and “Sonnet 71” ”
Get custom paper
NEW! smart matching with writer

The second of the three is HOLY SONNET written by John Donre a priest who is challenging death. The third and final is SONNET 71 written by William Shakespeare who is writing to his lover telling her to no longer mourn for him when he is gone .The three poems have very strong emotions and feelings and consist of strong images of love sex and death. Through out the poems the power of persuasion is very is very much apparent.

To His Coy Mistress was written in the 19th century. The language is difficult to understand to a modern reader as it was written before our time, but we can recognise Andrew Marvell is using the imagery of love death and sex to persuade his lover to sleep with him.

The power of persuasion is very much apparent, throughout the poem he emphasises that time is of the essence, Andrew Marvell aims his work at his mistress. Using three sections in his work, he hopes to convince her to have sex with him and portrays a sensitive and loving image of himself to do this.

Marvell uses three sections to give definite structure to his work. The first section is written using the past tense He uses death as a major issue in this poem as in their day they did not live as long as people today “The graves a fine an private place but none I think do there embrace “.

He is trying to persuade her by using the power and force of death. He is trying to get her to sleep with him. He achieves this by using quite strong images “thy beauty shall be no more be found nor in the marble vault, shall sound my echoing song then worms shall try that long preserved virginity”. Marvell is implying worms would crawl in and out of her the way he would of done.

Marvell writes as though he loves her he expresses these feelings with similes and metaphors “my vegetable love should grow “, ” no let us sport us while we may and like amorous birds of prey” He uses metaphor and similes to give us an idea of his love for her. Marvels main goal of the poem is to get his mistress to sleep with him. He tries to persuade her by using quite strong emotions love and death “and your quaint honour turn to dust and into ashes all my lust”. Marvell is saying that when she dies her beauty will go and with it his love which is quite a strong image.

The second of the three poems is Holy Sonnet which was written by John Donre also before the 19th century. The language is also quite difficult to a modern reader as it was also written before our time .We realise Donre is trying to personify death as though death was a real person; Donre was a priest who was challenging death. The poem was thought to be very religious as Dorne talks about dying and shortly waking to live eternally ” One short sleep past, we wake eternally, an death shalt be no more; death, thou shalt die”. Donre is insulting death he tells death poisons and charms will make them sleep better then deaths stroke “and poppy, or charms can make us sleep as well, And better than thy stroke why swellst thou then?”Donre tells death that he cannot kill him and that he will live forever in a better place heaven this is the poems main emphasis “One short sleep past, we wake eternally, and death shall be no more; death, thou shalt die.”

The third and final poem is Sonnet 71, which was written by William Shakespeare.Thelanguage is also difficult but we understand Shakespeare is writing to his lover telling her to no longer mourn for him when he is dead. Shakespeare like the other two author deals with an imagery of love and death, he tells her even though he’s gone he will always love her ” Nay, if you read this line remember not The hand that writ it; for I love you so ” he tells her when he is gone that she should move on, he uses quite strong images to represent this “But let your love even with my life decay;”

The three poems we have recently been studying are all quite difficult to understand but they share the same interest with love sex and death. Marvels persuasion to his coy mistress is very effective he uses the idea of death to persuade his mistress to snatch the moment while she can which is quite persuasive an would probably persuade most people. Donre’s poem Holy Sonnet was thought to be very religious as it defies death donre is a priest who feared nothing not even life itself and would probably gave someone courage if they new they were dying. Sonnet 71 by William Shakespeare also involves the concept of death.

He tells his lover to no longer mourn for him after he has died. Shakespeare tells his lover even though he’s gone he will always love her. Sonnet 71 would be quite reassuring to someone who has just lost a loved one. Although the poems differ they all share the idea and image of love and death which are strong emotions which effect most people some time in another therefore sharing universal interest. 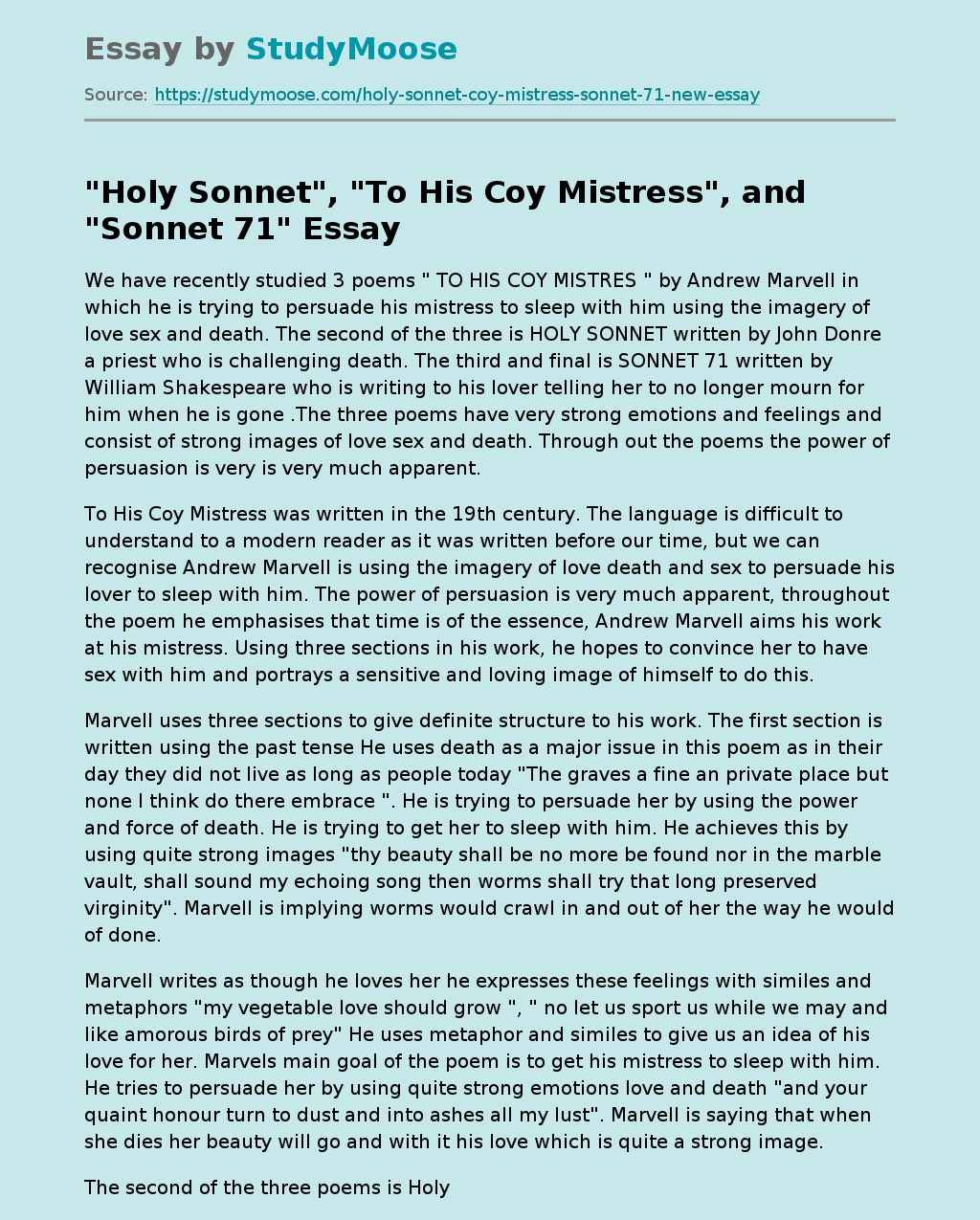