Don't use plagiarized sources. Get your custom essay on
“ Historical context: book of lamentations ”
Get custom paper
NEW! smart matching with writer

The once great nation was ruined and desolated. Weeping and wailing was heard. Hopelessness was evident. Jeremiah declared that such destruction happened because the people of Israel had sinned and rebelled against the Almighty God. The Lord, being a just God, had caused the fall of Jerusalem. (Easton’s Bible Dictionary) The second poem showed God’s wrath over the rebellious people of Israel. The Israelites had experienced the power of God’s anger.

He became an enemy and in His anger, God had allowed the people of Israel suffer too much.

This poem also tells us the worst condition of those who left in Jerusalem. (Easton’s Bible Dictionary) Having hope and asking the Lord’s forgiveness are depicted in the third poem. Jeremiah was pleading to the Lord to extend His help once again to His people. On the fourth poem, Jeremiah had stressed that everything that happened and everything the people had experienced were because of their uncountable and grievous sins.

(Easton’s Bible Dictionary) 2 Chronicles 36. 15-19 tells us the fall of Jerusalem. Israel and Judah both sinned greatly to the Lord, so in 587 BC, God had allowed Nebuchadnezzar to take over Jerusalem (Lamentations, J. W. Rogerson and J. D. W. Dunn). The temple and the wall of Jerusalem were set on fire. All articles and treasures from the temple and from the king and his officials were carried to Babylon. Many were put to death by the sword. Those who were not killed were exiled to Babylon and became slaves. (The Holy Bible, New International Version, NIV)

The emotions of the author of the Book of Lamentations were so intense. If we were living in those time and we saw the killings by sword, the great fire, the wailing and weeping, we could explain the anguish in Jeremiah’s heart as he wrote the poems. Jeremiah had seen Jerusalem before its fall. The city was busy. Yet after its fall, Jeremiah described it as a place of desolation. The priests who were highly respected also experienced hardships (Lamentations 1. 4 and 2. 20b). Since the city was destroyed, there was no food (Lamentations 2.

12 and 2. 19) and proper shelter (Lamentations 2. 10). Such situations led some women to cook their children just to survive (Lamentations 4. 10). The Israelites were God’s chosen people. God had brought them out of Egypt to the promise land. God made them powerful. In fact, God was the one fighting for them in order to conquer the promise land. But in spite of the many signs of wonders God had showed to them, the Israelites kept sinning against the Lord. The Holy Bible gives us the account of the many events in the lives of the Israelites.

The fear of the Lord had spread through many nations. The sins of the Israelites were too great that God’s presence could not withstand. Because of His love to His people he sent messages calling them to repent, return, and obey God (2 Chronicles 36. 15). But they did not listen.

They became overconfident that the Lord won’t leave them. The Book of Lamentations is not just an account of the fall of Jerusalem. It’s more on what had caused the fall. God was in control. He allowed the miseries in order to correct His children.

Historical context: book of lamentations. (2017, May 09). Retrieved from https://studymoose.com/historical-context-book-of-lamentations-essay 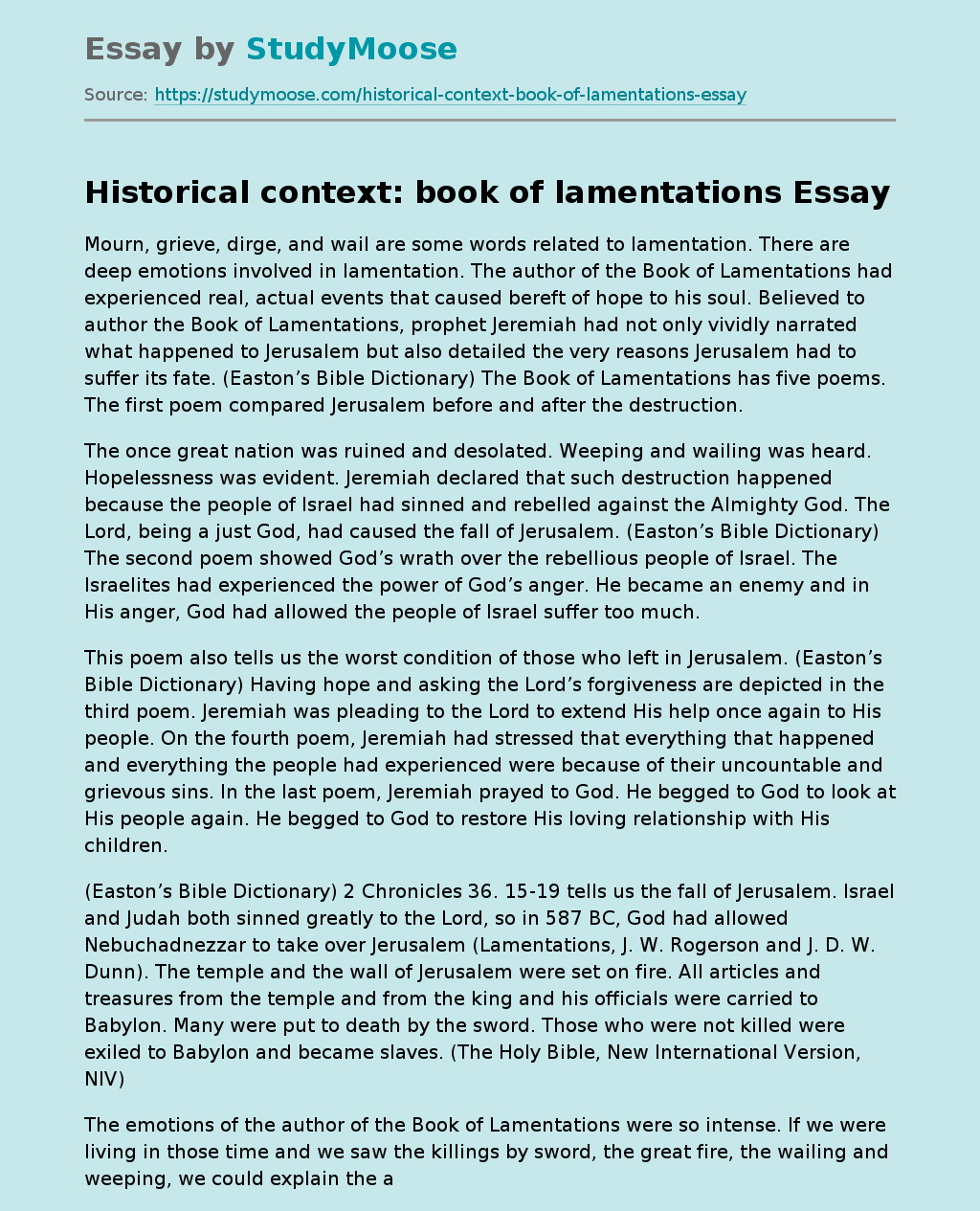