Hist US from 1877- Primary Source Analysis

During the Civil War William T. Sherman, a union general, executed Special Field Order 15 that granted freed slaves federal land which was captured during the conflict. Although, President Andrew Johnson declared that he would return this land to its former owners. In response, the Freedmen Committee in South Carolina petitioned against the decision in October 1865. The petition intended to persuade the president that his choice to return the property was not entirely justified and the negative effect it would have on the black community.

Don't use plagiarized sources. Get your custom essay on
“ Hist US from 1877- Primary Source Analysis ”
Get custom paper
NEW! smart matching with writer

The Freedmen Committee developed a petition not only to outline the promise of land due to Special Field Order 15 during the Civil War, but also to describe why the freedpeople deserved their newly settled land, and would even pay for it, to keep it from the previous confederate owners.

The freedmen did not consider this as a mere petition, but rather a begging of the president to allow them to take more control of their lives. A sense of betrayal must have been felt by the freedmen as their promises of government given land were crushed so suddenly.

This feeling of betrayal likely stems from the misunderstanding that in reality “Sherman lacked the authority to confiscate and distribute land…” Their tone is that of a desperate plea of justice for the government to uphold its end of the deal for the distributed land. It made no sense to the freedmen why the government would have such a change of heart for the former confederates while they had given all their support to the union from the start.

This was not just a plot for the freedmen to gain power from owning land, but instead they truly believed this was a rightfully deserved government distribution of property. The freedmen discussed how throughout the years they had made this land into a home and worked in slavery to preserve and improve it. Now that these people are considered free and not bound to anyone as property, they have the option to leave South Carolina. Granted, this is not the attitude the freedmen have within the petition because they simply would rather not leave their home behind.

The significance of not returning any real estate to former confederate owners was to avoid recreating the harsh treatment of the black community under slavery. Many of the freedmen were formal slaves who had a harsh background growing up under white authority. The petition states how upsetting the future will be for those freedmen, with no property to call their own, to end up working for the same cruel land owners once again. They even offer to pay the government for the land, which would have been a major struggle when considering their background. Despite all the freedmen’s efforts, “Radicalism had its limits, and the Republican Party’s commitment to economic stability eclipsed their interest in racial justice.”

Overall, President Andrew Johnson took advantage of the budding economic situation to further reconstruct the nation at the expense of many freed slaves. This carved the path to future racial discrimination such as the Black Codes, Jim Crow laws, and the Ku Klux Klan. The document provides insight on how hard the black community fought for even the smallest rights only to be inevitably rejected. The freedmen did not have the ability to threaten or bribe their way to recognition but could only plea for equality. 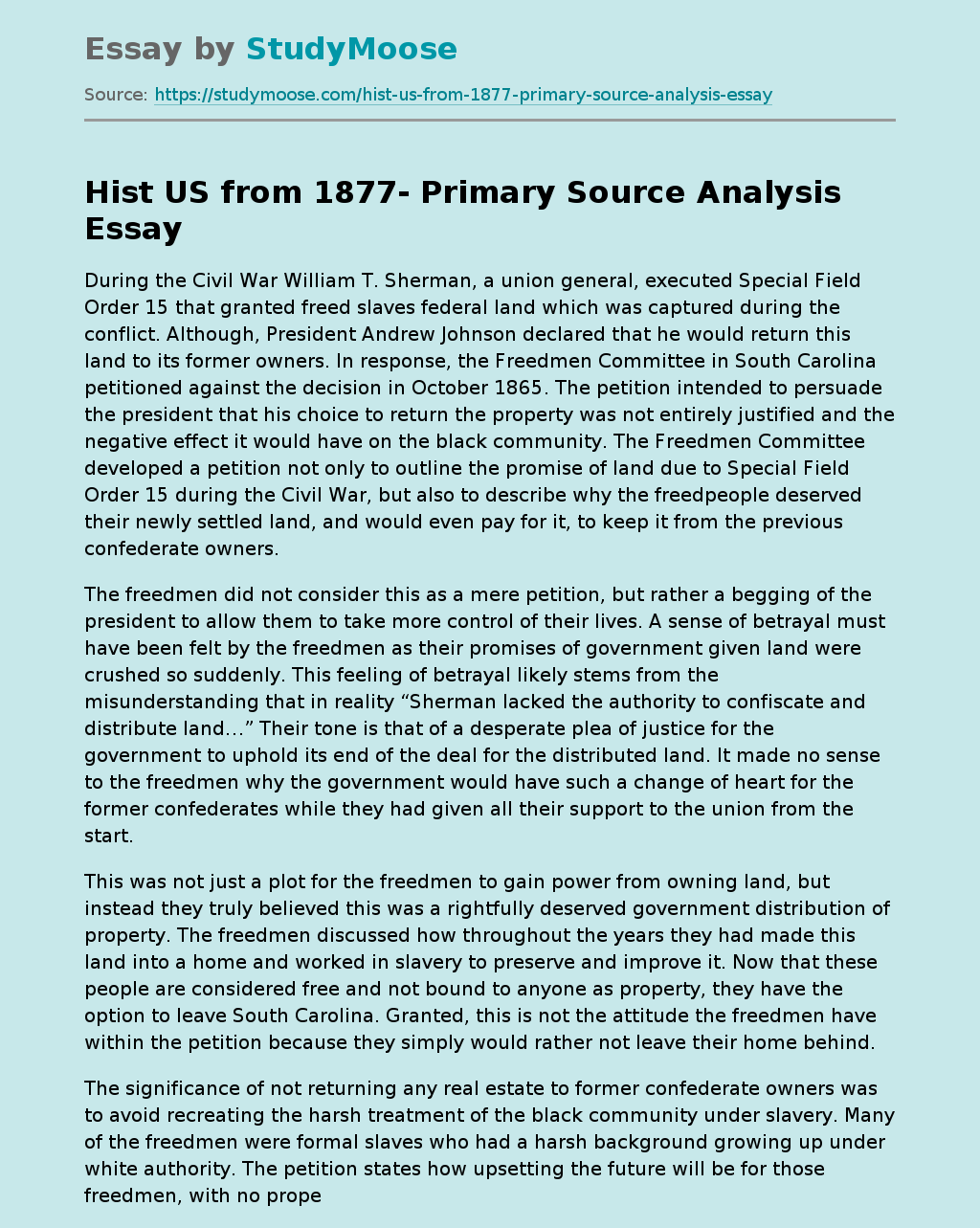