Carly Fiorina was hired in Hewlett-Packard as Chairwoman, CEO and President of Hewlett-Packard in 1999 but before that, she earned recognition being one of the most powerful women in America.  Her career in H-P was a combination of ups and down leaving the company with a lot more controversy. Carly Fiorina’s performance at HP caught the attentions of the people in America and the world.

Was CEO Carly Fiorina an example of internal or external succession at H-P and why?

Carly Fiorina’s appointment in Hewlett-Packard is an example of external succession because she was not a former H-P employee or member of the board; her expertise and renowned popularity made the H-P Board to hire her service.

Don't use plagiarized sources. Get your custom essay on
“ Hewlett-Packard Case Study ”
Get custom paper
NEW! smart matching with writer

Specifically, her achievements at Lucent and AT&T impressed the executives of H-P, which at that time was at a point of “downslide” (Boldman & Deal, p. 111), who thought that Fiorina could bring “drastic action and new leadership to shake things up” (ibid).

Describe the changes made at Hewlett-Packard under CEO Fiorina.

Carly Fiorina obviously was really smart and an innovator as evident in her achievements in her former companies.  However, her true ability was tested in Hewlett-Packard that left her torn-apart caused by the consequences of the massive scale she imposed on H-P.  She succeeded in some ways and failed in some aspects.

Nevertheless, Fiorina made three changes in HP in her six-year term that greatly affected the HP culture according to Craig (2008).  First, she redirected the spending of the company from “nurturing employees to financial performance” (Craig) that resulted to growth in earnings and revenues during her term.

Secondly, she changed the reward system given to employees from profit-sharing to an incentive program.  The last change she made was restructuring the whole company by merging similar units to one resulting to having only four units from the original 84 units.  Reduction of smaller independent businesses of HP resulted to job losses of many employees but improved the communication and internal transaction of the company.

Likewise, the merging of Hewlett-Packard and Compaq caused

Fiorina’s strategy brought more negative consequences than positive ones.  Though she got what she expected, but the fact that people were hurt by her aggressive action they all retaliated against her.  Unbelievably, only during her term that HP experienced so many job losses and employee apprehensions. These changes damaged the company as employee dissatisfaction grew further until 2005 and the stock reduced by half while its competitors such as Dell and IBM continued soaring high.

What is your opinion of what ultimately happened to her at HP, as illustrated by the second article?

Fiorina lost her credibility at HP which was contrary to her previous achievements she made prior to her appointment at HP.  I think she was overwhelmed by the shining glory of her achievements during that time that she promoted herself rather than the company’s future.  She failed to understand what the company really needed; instead she went on her way without fully analyzing what correct actions to take.

Basically, she relied to herself totally that she never noticed the cultural forces that raged against her.  She lost her focus as many turned into opposition to her plans; in the first place, she never got to the heart of the problem of HP that she misunderstood many of the remarks and words of expectation she received at the time she was appointed at HP.

How would you describe the most recent succession that occurred at H-P?

External succession with Fiorina was the first attempt made by the company and I think that experience gave them a great lesson to ponder on because the succession brought chaos to the company, which was opposite to what they expected.  HP was quite stable though some downslides occurred already when Fiorina was hired in 1999.  Fiorina was appointed as chairwoman in order to enhance further its competitiveness in the market but her leadership style did not meet the expected changes that she promised to them.

In the first place, HP became irrational by associating the success of Fiorina at AT&T and Lucent to Hewlett-Packard.  It failed to see competent and able leaders within the company who could replace the parting person.  Getting the right person for a very sensitive position must be done with care. Monk and Wagner suggested that in line with succession, it is important that a company create a succession plan that “incorporates every level of the organization” (2008, p. 174). The succession plan will guide the company in cases like Fiorina.

In the case of Carly Fiorina in HP, it is appropriate to assume that succession must be according to the plan and besides the company must set a ruling regarding succession.  Fiorina could be the right person in HP but the lack of clear vision and orientation of the culture and expectation of the company; she developed her own approaches that only harmed the people in the company. 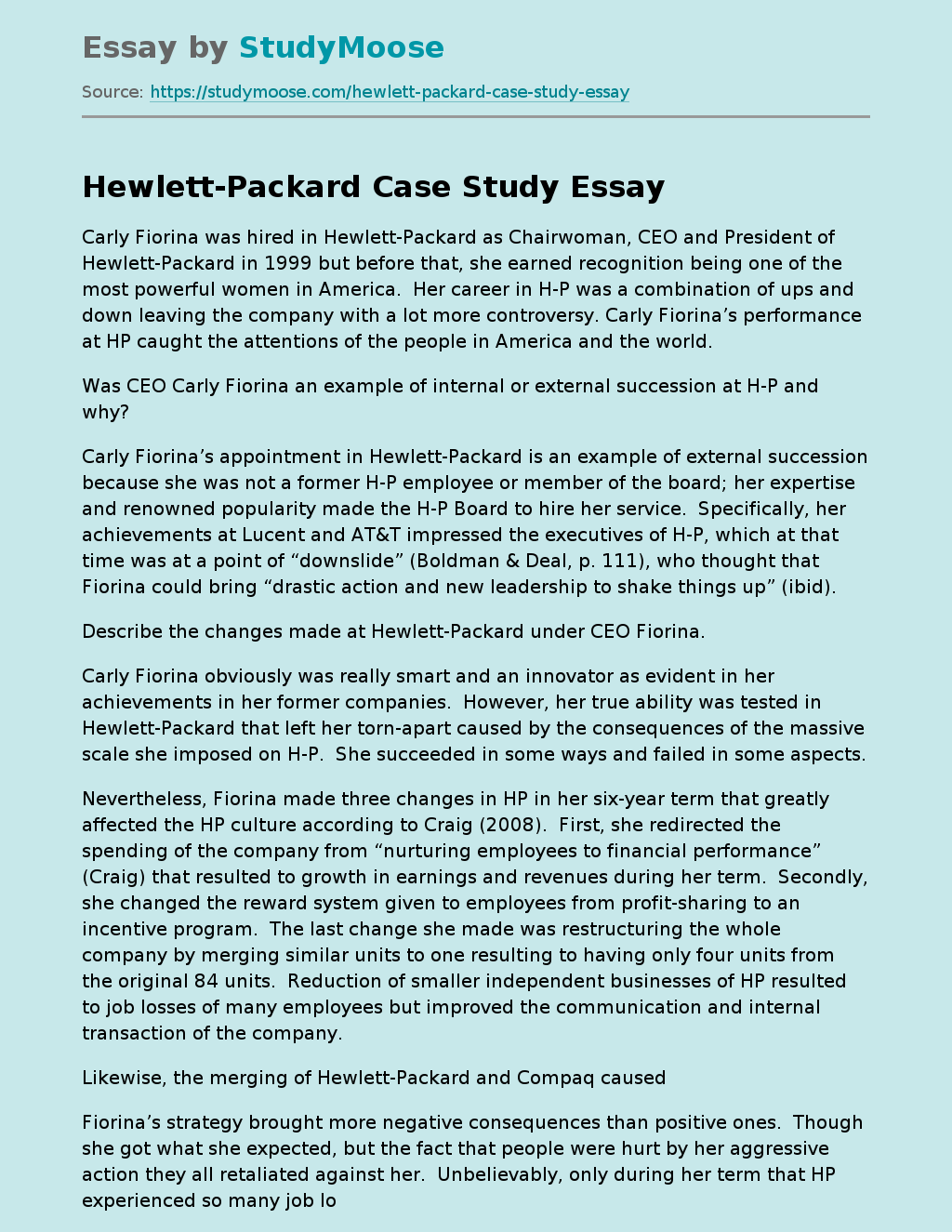