Abstract: The aim of the present study was to determine the level of the selected pesticides in muscle, liver and skin of common carp. Fish were sampled in spring and in autumn from fish pond which received purified wastewater from slaughterhouse. Pesticides including etridiazole, chloroneb, trifluralin, propachlor, chlorothalonil, hexa-chlorocyclopentadiene, atrazine, simazine, alachlor, metribuzin, metolachlor, DCPA, cyanazine, chlorobenzilate, endrin aldehyde, cis permethrin and trans permethrin were determined by using a GS-MS method. Pesticides were present at low and only propachlor was detected in all examined tissues.

Don't use plagiarized sources. Get your custom essay on
“ Health Risks associated with residual pesticide levels in fish ”
Get custom paper
NEW! smart matching with writer

The estimated daily intake for examined pesticides via common carp from integrated system of production were at the lower level compared with the acceptable daily intake recommended by different organizations, showing no significant risk on consumers. It is very important to maintain the safety of the fresh fish produced in wastewater in order to ensure food safety and avoid health problems in humans.

Moreover, fish represents an excellent source of fatty acids in healthy nutrition (Ljubojevi? et al. 2015). On the other hand, consumers are increasingly directing their attention towards safety requirements associated with the consumption of fish due to the presence of different environmental contaminants. Consumption of fish contaminated with pesticides may lead to poisoning of consumers. Pesticides are widely used in agriculture. It is highly important to understand the nature, bioaccumulation and distribution of pesticides in aquatic environment and also the routes of contamination in order to control and prevent outbreaks of poisoning associated with fish consumption.

Pesticides are present in aquatic environment and can be transferred into fish and enter into the food chain (Guo et al. 2008). Due to the fact that pesticides are highly soluble in fats, they accumulate in fish tissue (El-Shahawi et al. 2010). According to Cao et al. (2007) pesticides can remain in soil and water for years. There are increasing trend in the use of wastewater in fish production, particularly in developing countries. The fish rearing in waste water may represents a significant risk for public health (Kim and Aga 2007). Fish may represent a bioindicator of environmental contamination and the health risk arising from fish produced in wastewater filled fish ponds is questionable. Thus, the safety of fish reared in wastewater filled ponds becomes a public health concern. There are several studies regarding the level of pesticides, mainly organochlorine pesticides, in common carp in different parts of the world (Svobodov? et al. 2003; Herceg Romani? et al. 2018; Hu et al. 2010; Ondarza et al. 2010), but there is no available data in scientific literature regarding concentration of pesticides in common carp produced in purified wastewater from slaughterhouse. It should be highlighted that such systems may be sustainable solutions for aquaculture industry as well as for slaughterhouses worldwide. The main aim of the present study was to examine the levels of pesticides in the common carp produced in purified wastewater from slaughterhouse. For that purpose, common carp meat, liver and skin were examined using GS-MS, for 17 pesticides (etridiazole, chloroneb, trifluralin, propachlor, chlorothalonil, hexa- chlorocyclopentadiene, atrazine, simazine, alachlor, metribuzin, metolachlor, DCPA, cyanazine, chlorobenzilate, endrin aldehyde, cis permethrin and trans permethrin) in order to evaluate the slaughterhouse wastewater treatment systems for their efficiency as well as the safety of produced fish meat.

An earthen pond with an area of 1 ha and average depth of 1.3 m was built in the Pe?inci village (N ?44°54?19?, E 19°57?35?), Srem District, the Republic of Serbia. Purified water from slaughterhouse was used for filling the pond. Continuous aeration was provided. Two year old fingerlings of common carp were stocked at density 2500 individuals/ha. Industrially produced completed feed mixture and locally available ingredients were used as fish feed and feed was provided manually twice per day. Seven individuals of common carp were harvested from the pond in spring (April) and in autumn (October). All samples were dissected, dorsal muscles without skin, liver and skin were homogenised and prepared for analyses. All chemicals and reagents used in this experiment were of analytical grade with high purity. Preparation of sample which was based on extraction with acetonitrile (CAN), (Sigma-Aldrich, St. Louis, USA) in the presence of anhydrous magnesium sulfate (MgSO4) and anhydrous sodium acetate (CH3COONa) Merck, Darmstadt, Germany) was performed as described by Kartalovi? et al. (2016). The gas-mass chromatography was Agilent 7890B/5977A MSD and operating conditions were as follow: fused silica column [30 m x 0.25 ?m film of HP-5M – thickness]; injection temperature was set at 280°C using the splitiless mode and the volume injected was 4 ?L. The column temperature was programmed as follows; held at 50°C for 0.4 min; 50-195°C at 25°C per min, held 1.5 min; 195-265 at 8°C per min and maintained at 315°C for 1.25 minutes on 20°C per min, MSD temperature was 280°C. Calculation of precision, accuracy, linearity, LOD and LOQ (Table 1) was performed by MassHunter Software (Agilent Technologies, Santa Clara, CA, USA). The quantification was based on external calibrations curves prepared from the standard solution of each of the pesticides.

Table 1 shows method performance data for 17 selected pesticides. The results of the study are shown in Table 2 (spring) and Table 3 (autumn). Generally, the concentrations of pesticides were low in all analysed samples in both seasons. A number of pesticides were not detected neither in muscle tissue, and neither in liver and skin samples. It includes the following: etridiazole, trifluralin, chlorothalonil, hexa- chlorocyclopentadiene, cis permethrin and trans permethrin. In autumn concentrations of propachlor were two fold higher compared to concentrations obtained in spring and were 20.53 ± 0.06 µg/kg in muscle tissue , in skin concentrations were in range 20.46-34.15 µg/kg and in liver was 20.58 ± 0.12 µg/kg. Atrazine was above the limit of detection in two samples of skin and simazine in one sample of muscle tissue and two samples of skin. Alachlor was found in three samples of skin and metribuzin in two. Metachlor, DCPA and cyanazine were found only in skin samples. Chlorobenzilate was found only in one sample of skin, while endrin aldehyde was present only in one sample of skin in amount of 111.13 µg/kg.

Concentrations of pesticides were generally comparable or lower than those found in studies of common carp and Cyprinidae species worldwide (Svobodov? et al. 2003; Darko et al. 2008). Etridiazole, chlorothalonil, atrazine, simazine, metribuzin, metolachlor, DCPA and chlorobenzilat are registered for use in Serbia. All of those pesticides except etridiazole and chlorothalonil were detected in low levels in skin of common carp. Pesticides such as atrazine, simazine, trifluralin, alachlor are included in the list of priority substances of the Directive 2008/105/EC (EEC 2008) and the Directive 2013/ 39/EC (EEC 2013) and three of those pesticides were detected in the present study. A number of pesticides not registered (chloroneb) or banned in Serbia were also found (mainly propachlor, alachlor and endrin aldehyde) and their presence could be attributed to illegal use. The pesticides included in the present study are not often examined so the data regarding their content in fish including common carp are scarce. Papadakis et al. (2015) reported the detection of etridiazole, metolachlor, atrazine, and alachlor (maximum concentrations of 0.026, 0.688, 1.465 and 1.098 ?g/L, respectively, in the surface waters of Lake Vistonis Basin, Greece. Kong et al. (2008) highlighted that pesticides were used widely in China, and that pesticides like atrazine, simazine, and alachlor have a harmful effects on endocrine system. All the mentioned pesticides were detected but only in skin and in relatively low concentrations in common carp in our study. Inadequate regulation and poor agriculture management are the main reasons for the fact that banned pesticides are still in illegal usage. Among pesticides determined in the common carp samples of muscle, liver and skin residual concentration of propachlor was dominant in all tissues in both season. The highest concentrations of pesticides were determined in skin samples, followed by muscle tissue and the lowest concentrations were in liver. Ondarza et al. (2010) also found that the concentrations of pesticides were higher in muscle tissue then in liver. Since the skin is a kind of protective barrier, it may be the reason for the highest concentrations of pesticides detected in it. Thomas et al. (2012) examined levels of pesticides in muscles of farmed common carp in France and also found that the levels of pesticides were low. Also, Padula et al. (2008) didn’t detect any pesticide residues in wild and farmed southern blue?n tuna (Thunnus maccoyii). Kong et al. (2008) evaluated the municipal sewage treatment system in China for their pollutant removal efficiency. They found that concentrations of alachlor, acetochlor, atrazine were 0.074-0.021 µg/l, 0.160-0.096 µg/l and 0.238-0.184 µg/l, respectively, and the total removal e?ciency of atrazine was poorest through the sewage treatment systems. Our results showed that the wastewater treatment systems in slaughterhouse were efficient in removing pesticides, and consequently that the discharged effluent is not harmful for the aquatic environment. Furthermore, Khalil and Hussein (1997) reported that the primary and secondary treated waste effluents were successfully used to growth the Nile tilapia. According to our results, the treated wastewater was successfully used for production of common carp in terms of pesticides contamination. Estimated intake of freshwater fish in Serbia, according to Jankovi? et al. (2012), is 29.4 g per week. If we compare the risk of ingested determined pesticides through consumption of common carp with a recommended maximum intake of mentioned pesticides by various organization (Table 4), it can be concluded that, even in the worst case scenario in which a resident of Serbia of average body weight of 70 kg would consume the fish with a maximum detected levels of pesticides, the daily intake would still be far less than the recommended. Having that in mind, it can be concluded that this intake would not pose a health risk in human populations.

Pesticide levels in all tissues of examined fish were below the maximum limits of residues in food for used and banned pesticides. The pesticides included in the present study are not usually included in the monitoring studies in Serbia but also in other countries worldwide. However, the obtained results revealed that several of those pesticides could pose a threat to human health and environment. This should be taken into account by the authority so that those pesticides should be included in some new monitoring schemes. There is no doubt that good knowledge and management of pesticides associated with the fish consumption are of great medical, economic and environmental importance. Continuous monitoring, including appropriate testing of fish meat in order to determine the presence of pesticides is necessary. It is important due to the fact that fish is an important food source but also is an important indicator of environmental pollution. The obtained results provide important data for the risk assessment of pesticides from fish reared in integrated systems. However, the further research are necessary for developing risk management tools for integrated aquaculture production systems. 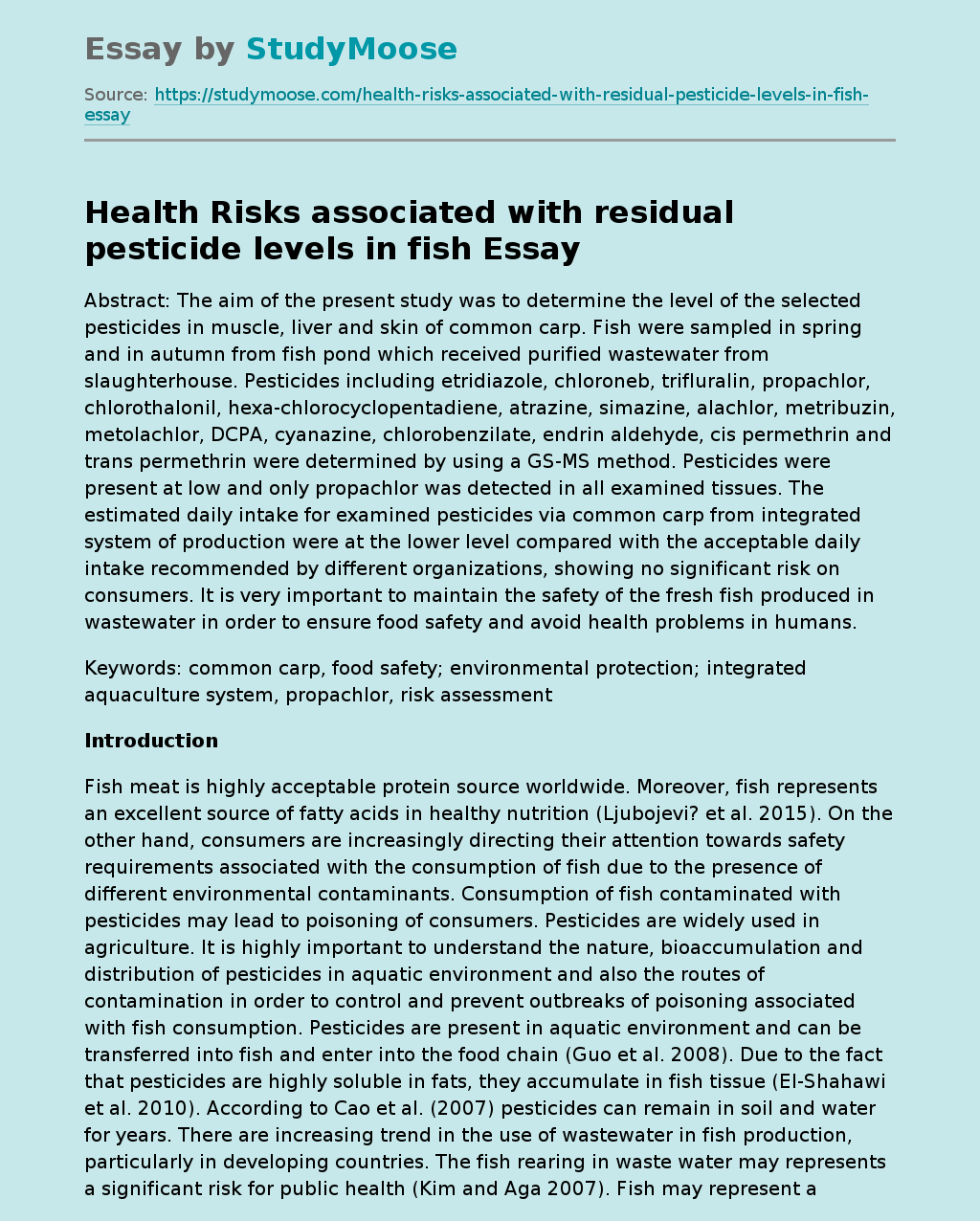