Murder, mayhem, and madness are three characteristics the country’s first serial killer, Herman Webster Mudgett, better known as H. H. Holmes, rooted deep inside of him. Herman Webster Mudgett not only exceeded expectations with his intelligence but also shifted the way serial killers are perceived. H. H. Holmes is deemed to be the country’s first serial killer and the father of swindling and trickstering. An intellectual, who attended the University of Michigan and later moved to Chicago, changing his name to Holmes.

Don't use plagiarized sources. Get your custom essay on
“ H.H. Holmes: One of America’s First Recorded Serial Killers ”
Get custom paper
NEW! smart matching with writer

While building his “murder castle” around the time the World’s Columbian Exposition was being built, he killed people then took their life insurance policies in order to become rich. After being arrested for the murder of Pitezel, he confessed to 27 deaths, although, the estimated number of people he killed exceeds 200. The main character in The Devil in the White City, H. H. Holmes, has a significant role in the development of organized crime, which unfolds throughout the story.

Both in the book, The Devil in the White City, by Erik Larson and in history, organized crime has proven to be on the rise and taking a toll on many, while successfully leading others to commit heinous crimes.

The increase of crime and social and economic change has had a major turning point in the book, The Devil in the White City, and in American History. To celebrate the 400th anniversary of Christopher Columbus’s discovery of the New World, Burnham and Root, two successful architects, were chosen to build the World’s Columbian Exposition, better known as, the World’s Fair.

The fair was to be built in the infamous White City (aka Chicago). Despite having a grand piece of architecture in the process of being built in America, many citizens were discontent, which leads to rebellious groups performing an organized crime, along with social and economic change due to the crimes. Taking into consideration mafias and characters such as Al Capone and John Gotti, who have made a drastic impact on society. Organized crime is still on the rise and pursues to impact society and our economy. Throughout American History and the book, The Devil in the White City, by Erik Larson, organized crime, along with social and economic change have considerably impacted the way citizens live their daily life.

Ever since prohibition was passed, organized crime has been on the rise, driving individuals to a criminal life, both in the book and in the outside world. In the book, Holmes is known as a man who lured people into his hotel and killed them, some may say, with similarities to Jack the Ripper’s killings. “Abruptly the murders stopped as if that trust with Mary Kelly had stated the killers need at last. Five confirmed victims, only five, and Jack the Ripper became the embodiment, forever, of pure evil” (Larson 70). First and foremost, it is fairly ironic that the world’s first serial killer would have the same last name as a man who is considered to be one of the greatest detectives in American Literature, Sherlock Holmes. Although, H. H. Holmes first ignored the idea of wrongdoing and moved toward a path that would lead him to victory without all the evil. Unfortunately, after years of no luck, Holmes began moving towards the “path of night.” Aside from knowing what he was doing was wrong, he still decided to include others on it, for the sake of him not being lonely. Holmes displays little affection towards the well being of others, along with a willingness to kill people for the advancement of his own life. Secondly, Jack the Ripper, the notorious, unidentified British serial killer who began his spree in 1888 and ended in 1891. Larson uses Jack the Ripper to foreshadow Holmes’s future actions.

Jack and Holmes can be considered as, “two peas in a pod,” seeing as how they are both men who went on a killing spree with no alleged reason. This twist in the story causes a drastic change, from talking about architecture to comparing serial killers. Furthermore, grabbing the reader’s attention and ensuring preparedness in the reader for what’s to come next. Also, in the book, Holmes has a vision of building a hotel for the foreign visitors of the World’s Fair, but during the process, he buys materials on credit which he never pays back despite having people come to his door angrily asking for him to do so. “Davis estimated that Holmes made $200,000 through his drugstore and other business ventures, most of which were fraudulent. Holmes attempted, for example, to sell investors a machine that turned water into natural gas. He secretly connected his prototype to city gas lines” (Larson 72). Some have said Holmes could have creditors coming into his store trying to start a fight and Holmes would send them away, happy and satisfied. Davis claims, with Holmes, you could never start a fight.

Although Holmes has proven to be tremendously self-centered, taking the example of Pitezel who was arrested, since he was working for Holmes, Holmes posted bail but later killed him after the job was done. Holmes seems to only care about those who will help him move him forward to his success. Other than being self-centered, his lack of compassion has made him push people further away from him, like his workers who left after they could no longer stand his attitude and the way he did business. Holmes seems to put on a mask when it comes to his business because he doesn’t want to look weak among his competitors. He went from being a young man who takes the high and mighty road to one with malicious intent that cheats, lies, steals, and kills in order to have success. In the book, while Holmes is building his hotel, he invites many workers to come help, but when they ask for their first paycheck he denies and fires them on the spot. “As workers came to ask him for their wages, he berated them for doing shoddy work and refused to pay them, even if the work was perfect. They quit, or he fired them. He recruited others to replace them and treated those workers the same way,” (Larson 67). Through his actions taken upon when doing business, Holmes has demonstrated just how various he is. 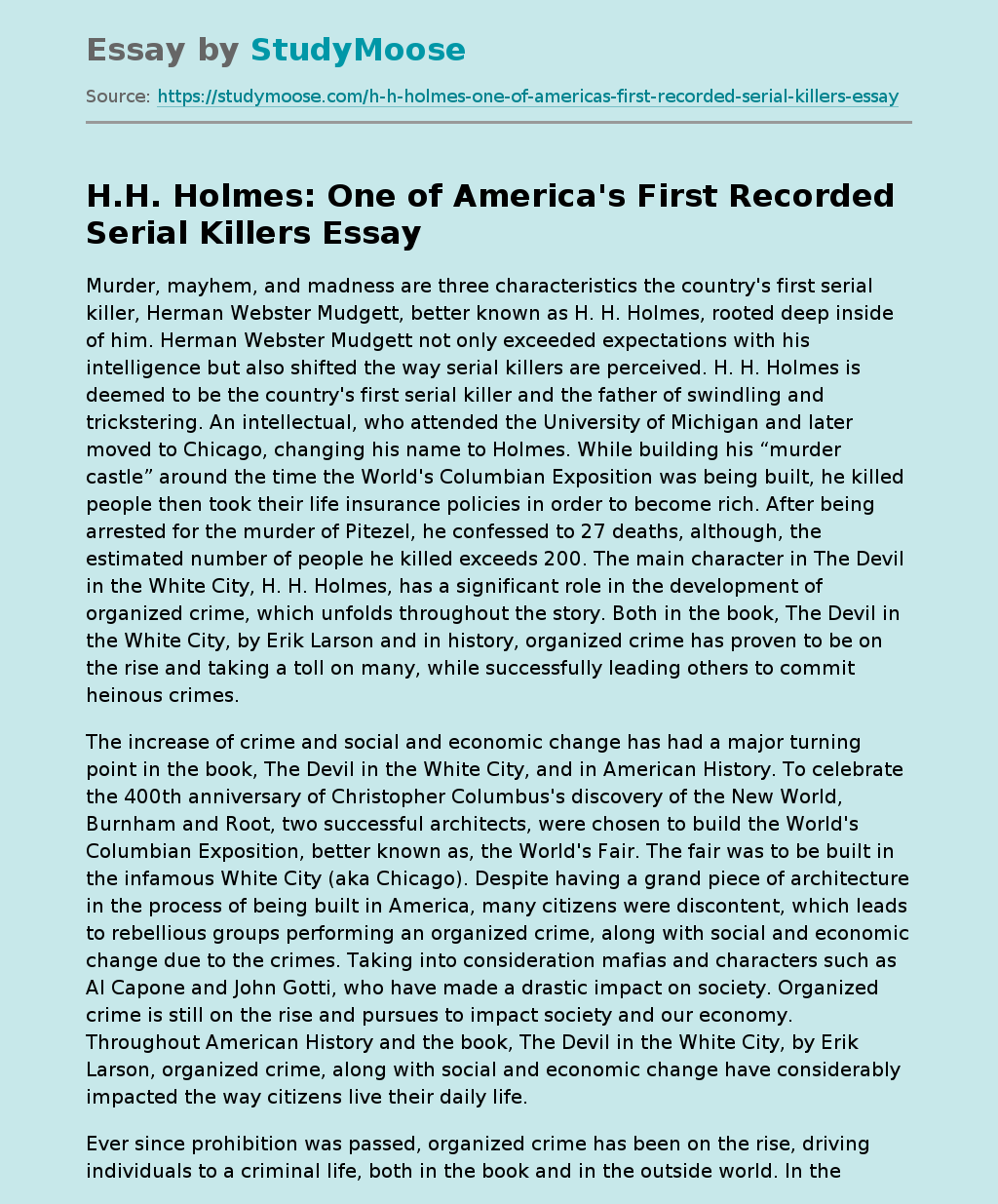