Legends in the books

Groom dedicated one chapter of his The Gothic to discussing ballades, revenge tragedy, as well as supernatural things such as ghosts, witches and devils, and referred to them as factors which helped develop the Gothic literature (Gloom 34-43). If anything, the world of The Witcher is reminiscent of ballades:

The world of ballades is an archaic, merrie England populated with heroes and lovers, villains and outlaws, elves and fairies; it is governed by saints days and festivals, custom and superstition, and its sovereigns are rulers by absolute power.

Don't use plagiarized sources. Get your custom essay on
“ Legends in the books ”
Get custom paper
NEW! smart matching with writer

And yet at the same time society is lawless and princes are capricious. (Gloom 35)

Except for the England part, Sapkowski’s world falls exactly under these descriptions. His world is brutal, filled with death and bloodshed, endless wars and countless battles, it is inhabited by humans, elves and monsters, not to mention the countless sorcerers and sorceresses. Magic is present in this world, but the harsh politics have put the mages, witchers and anybody else who can wield magic in an unfavourable position from the point of view of different kingdoms.

Going into extreme detail and discussing Sapkowski’s world-building would make this report utterly boring and long, which is why I want to bring forward one specific example.

As already mentioned above, Sapkowski’s books make great use of Slavic folklore. In fairy-tales of Slavic origins, we often are introduced to a character who is in a pinch and cannot get out of it without outer help. Luckily, when all hope is lost the outer help arrives in a form of an old man, who offers to help the character, as long as they promise to give up the first thing that they encounter when they get home (other times this is phrased as promise to give that what you have but do not know about).

This usually turns out to be the child of the character who runs to meet them on the porch, or who was born while the character was away from home for months. Afterwards the story swiftly switches to the child and makes them the protagonist. In The Witcher, new witchers are usually made from children who have been promised to be given away. This is how Geralt was turned into a witcher, and this is also how Geralt found Cirilla.

Another trope, which often appears in Slavic folklore is being attributed to the Wild Hunt in The Witcher books:

Think back to your legends. Legends about people who mysteriously disappeared and returned years later, only to gaze on the overgrown graves of their loved ones. Do you think they were fantasies, fabrications? You’re mistaken. For whole centuries people have been kidnapped, carried away by horsemen whom you call the Wild Hunt. Kidnapped, exploited, and then discarded like the shell of a sucked-out egg. (352)

The books are also filled with a charade of monsters from Slavic myths and folklore, such as leshens, alps, botchlings, noonwraiths and so on. However, one could argue that through his novels Sapkowski was trying to convey the humans as the worst kind of monsters, who destroy everything and anything on their way, even if it is something as rare and extinct as magic or magical creatures (both of good and evil natures).

Legends in the books. (2019, Nov 21). Retrieved from https://studymoose.com/groom-dedicated-one-chapter-of-his-the-gothic-to-discussing-example-essay 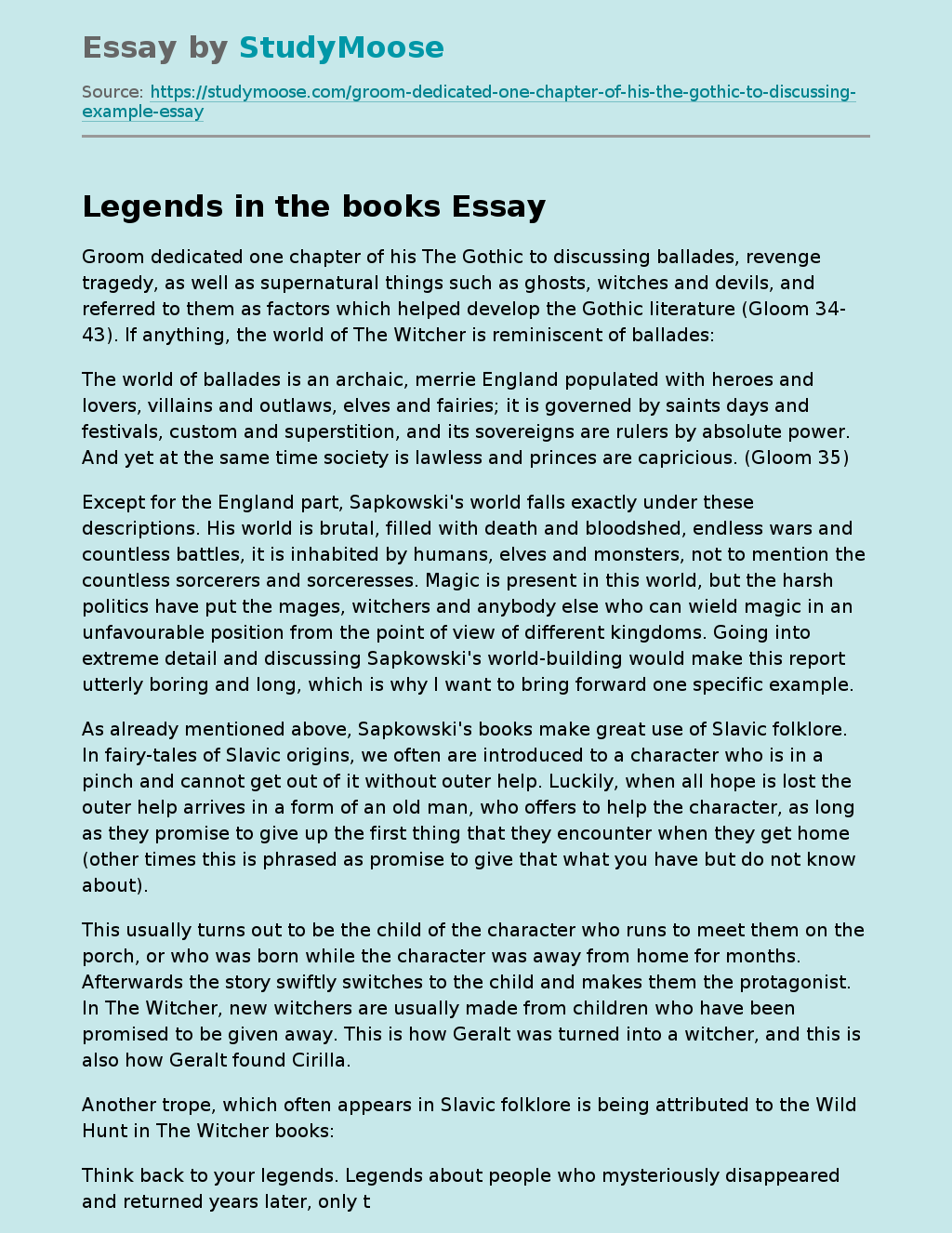