What are the importance of sanctuaries among the Greeks

Enumerate 5 of the; in bullets. Panhellenic sanctuaries, which ultimately drew pilgrims, athletes and other travelers from all over ancient Greece and neighboring regions, were large, highly developed complexes that served many functions and could accommodate their visitors’ diverse needs. To protect guests from sun and rain, roofed, colonnaded shelters (South Stoa, Echo Stoa) were erected. A Palaestra and gymnasium provided practice spaces for boxing, wrestling, jumping, running and the throwing of the javelin and discus.

Don't use plagiarized sources. Get your custom essay on
“ Greek Architecture Style ”
Get custom paper
NEW! smart matching with writer

The field was additionally used for instruction, recreation and the oiling and sanding of athletes’ bodies. More concrete markers of early sanctuaries are deposits of varying kinds, namely votive offerings such as figurines or daily objects. Crucial for worship and veneration of the gods was animal sacrifice and therefore the resultant burned offerings. Associations with particular poleis also became more widespread, as control over particular sanctuaries became tied to political power of the various rising city-states.

Sanctuaries were very important in Ancient Greece because they provided the means of communication with the gods.

Without good communication a good relation with the gods was very hard to maintain, and a good relation was a necessity in a world which was full of gods. In Greek Antiquity, sanctuaries often had not only a religious dimension, but also a political one, which was often equally important. These two dimensions were almost always intertwined. By creating a connection, either as an individual or a political unity to a specific sanctuary, the person or unity in question becomes also connected the cultural norms expressed by this sanctuary and with other cult members.

It is, in other words, partly a way of showing where you stand. Although this process functions on several levels, it operates most clearly on the polis and supra-polis level. A famous example is the sanctuary of Apollo at Delphi, to which almost all Greek cities had a certain connection. These connections are, however, dynamic and can change over time; this signifies the political relation between sanctuary and polis.

What is a Greek Temple

In ancient Greece, temples were not places of worship but monuments dedicated to the beloved gods and goddesses. Many necessary ancient temples area unit situated in Greece and alternative countries, such as Italy, which were then part of the ancient Greek empire. They are the foremost necessary and most widespread building kind in Greek architecture. Most religious buildings today are intended for congregational worship, where groups of people get together on a regular basis to celebrate their god, reaffirm their faith and receive spiritual comfort. Ancient Greek temples were rarely used this way. They were meant to function homes for the individual god or deity WHO protected and sustained the community. Temples were frequently used to store votive offerings. Ancient Greek temples were built in order to house the many sculptures of the various deities. The ancient Greeks used the temples as the sacred place whereby they would be able to leave specific types of offerings. Depending upon the wealth and status of the individual, these offerings might include flowers, food, personal valuables, jewelry, oils and incense. The architecture of the temples reflected the respect and deference that the ancient Greeks had for their pantheon of Gods. These temples served as the link between the sacred and the secular in ancient Greece, and as such played a significant role in the ancient Greek society. In Ancient Greece, temples were built as “houses” for deities that also served as a place of worship. People would worship at a temple by transferral offerings that a specific god was believed to possess favored- as an example, leaving wine at the temple of Dionysus. Some individuals could have additionally clean and adorned the temple in commission to the gods, or sang and danced outside in honor of the god.

What are the three Greek architectural orders

Enumerate distinct features or characteristics for each using a graphical representation. ( one bond paper for each)a. IonicThe Ionian order, on the other hand, is the next order that is developed in the Ionian Islands. It is employed in smaller buildings and is thought for the scrolls on its capital that area unit referred to as volutes. Between the volutes are the egg and dart which are carved on a curved section. The columns area unit additional slender in distinction to the Doric Order’s compact giant|and big} columns with large bases. The shafts are taller with carved lines or flutes running from top to bottom and a distinct bulge or entasis making it look straight.b. DoricThe Doric Order is the simplest and oldest of the three orders. It has no base, and its shaft is made up of 20 plain sides made up of concave curves called flutes. The capital is created of a circular bottom referred to as the ovolo that’s screw-topped by a sq. referred to as the abacus that makes it seem plain however powerful.c. CorinthianThe Corinthian order is that the most ornate of the 3 orders with fluted columns and elaborately designed bulging capitals with herbaceous plant leaves as decorations. The Olympieion of Athens and the Sarapeum of Alexandria showcase the Corinthian Order. 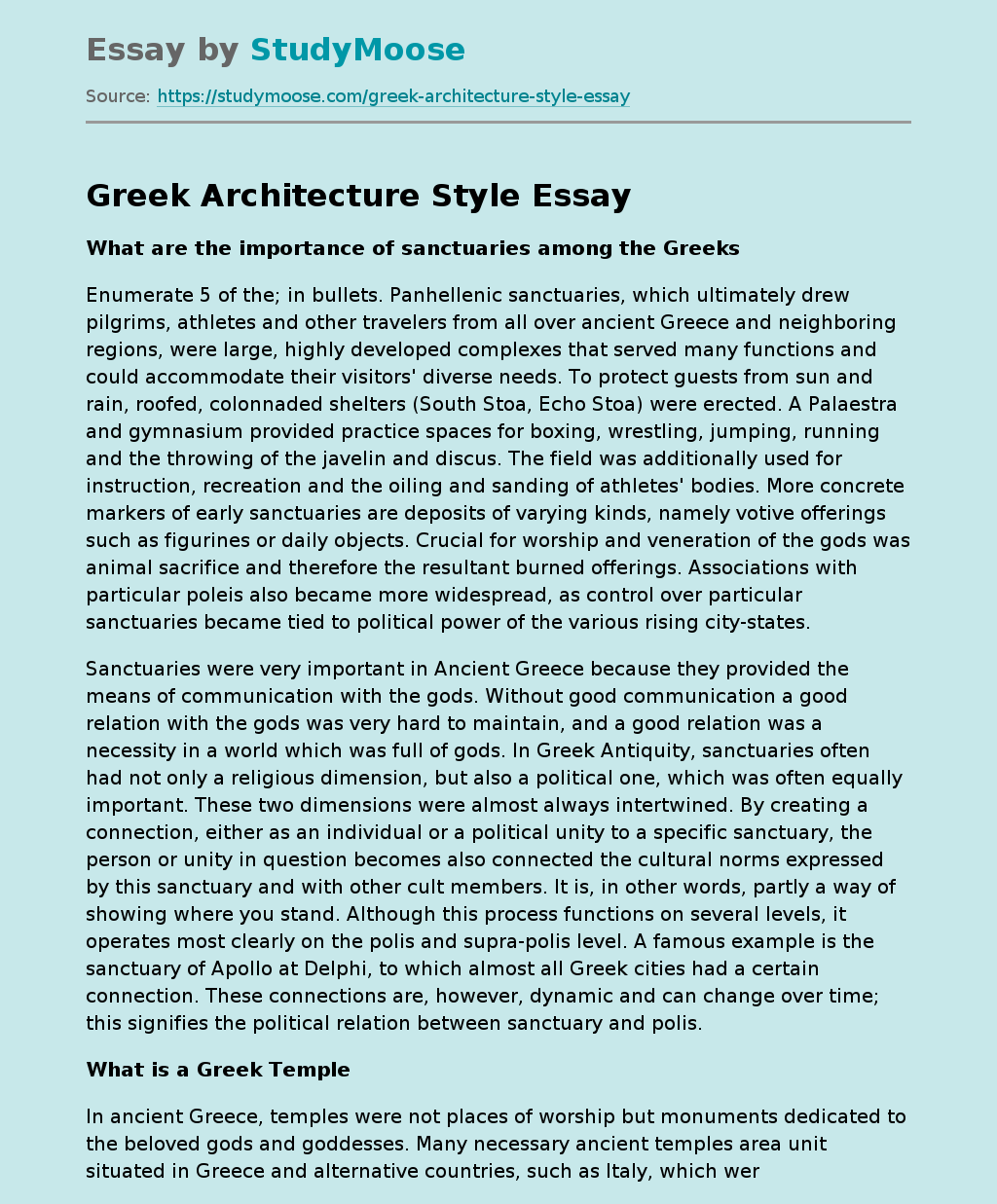