Google Inc. and Amazon Inc. are pioneers in developing lifestyle enhancing software and hardware technology. Both have brought to market a family of devices; which include wireless speakers that are made interactive by utilizing artificial intelligence and integrated peripherals, via Wi-Fi connectivity that has revolutionized smart home technology and seamlessly integrated functions. These devices offer useful functionalities such as setting a reminder or providing assistance to explain a process in a recipe. The Amazon Echo and the Google Home, will be compared in terms of functionalities including third party interfaces, cost and customer feedback and will be evaluated for efficiency and effectiveness in the home.

Don't use plagiarized sources. Get your custom essay on
“ Google Inc and Amazon Inc ”
Get custom paper
NEW! smart matching with writer

Characteristically, the Amazon Echo Plus is a smart speaker equipped with a smart home hub and a built in artificial intelligence known as “Alexa”.

It features a mute button and volume controls on top. There are several variations of the echo; these include the Echo Dot, which is the similar to the Echo Plus, only smaller in size and it does not contain the smart home hub.

These are usually placed in adjoining rooms and are usually linked to the Echo Plus as room boosters. There is also the Echo Show that has all the features of the Echo Plus, and it also plays video. Interestingly, the Amazon Echo is designed to interface with several third party peripheral devices such as the NEST products, Hue, Ecobee, Tp-link, Insteon along with many other compatible devices. To work effectively, all Amazon Echo devices need internet connectivity to access their full functionality.

In addition, Amazon Echo devices also need to be linked to an amazon prime account; this optimizes the features and effectiveness of the product.While similar to the Amazon Echo, Google Home, is a smart speaker with a built in artificial intelligence known as “Google Assistant.” The speaker comes with a mute button on the back, touch technology, and the base of the system can be changed to match the color of one’s décor.

Additionally, the Amazon Echo is constructed with dual speakers, complete with surround sound powered by Dolby, a three millimeter line out cable, an internal microphone with wide spectrum range. The echo is also equipped with Bluetooth connectivity to connect to other devices, such as a cellular phone, other wireless speakers and several other compatible wireless devices. The suggested home configuration is a standard Echo Plus and if a house is large one can link the farther rooms with an Echo Dot as a booster. Comparatively the cost listed on Amazon’s website for the Amazon Echo Plus is $149; the Amazon Echo costs just under $85; the Echo Dot costs $39.99 and the Echo Show costs approximately $230. (“Amazon Echo”). The choices and options depends on one’s personal needs, preference and affordability.Conversely, the Google Home comes in three distinct sizes from the smallest size of approximately three inches to the largest Google Home Max measuring approximately thirteen inches.

The speaker size for the Google mini is almost two inches, while the Google Max has two four and a half inch speakers. The Google Home has a line-out with a three millimeter cable, a wide ranging microphone. It also has Bluetooth connectivity to connect to other devices such as a smart phone, other wireless speakers and several other compatible wireless devices. For a larger sized house a Google Mini can be purchased and linked to the main Google Home. The price viewed on the Google store website, for the Google Mini is $49, while the Google Home costs $149 and the Google Max costs approximately $400. (“Google Home”). Likewise to the Amazon Echo the choices and options are depending on one’s personal needs, preference and budget. In order to access the many features of the Amazon Echo one is introduced to Alexa the artificial intelligent component of the device and prompted to ask questions, such as “Alexa, what is the temperature?” to “Alexa, how do you say pardon in French?” Alexa will allow multiple users and can differentiate each user by voice. The most advantageous feature of the Amazon Echo is the smart hub. The smart hub enables the user to voice control their smart home.

A smart home is a building that has been fitted with the compatible infrastructures that can connect to the Amazon Echo via Wi-Fi, which enables the user to execute voice commands to control internal and external components, such as the lighting, the thermostats, home security system, and several appliances thru the use of smart plugs. At the user’s verbal or pre-programmed request, Alexa will turn the lights on or off, adjust the temperature, start brewing the coffee, activate or deactivate the alarm, and start the vacuum cleaner. Alexa is also programmed to search for, play and stream music and movies from an amazon prime account or several other streaming services such as YouTube, Pandora, Spotify and Apple. Voice control the volume on the television. Alexa, at the user’s request, will readily send a text message to someone, lock or unlock the car door. Alexa can also play several games with the user, including made up games and read the children a bedtime story. Alexa will also manage and coordinate the user’s calendar and daily schedules.

Alexa is equipped to provide interactive help to learn new things, for instance Alexa can provide the steps on how to organize a lab experiment, or provide steps to solving an equation, additionally the Amazon Echo provide an integrated social hub in that it will interact with many of the applications and provide several functions at the users voice command. For example if one uses banking application, Alexa can check the balance and transfer funds. Correspondingly, the Google Home is an effective device to ask any myriad of questions, for instance, “Google, how do you say hello in Spanish?” or “Google what is the difference between Latin and Latino?” Like the Amazon Echo, the Google Assistant can distinguish between six different voice patterns and provide a personalized experience for each user. The Google Home is also capable of interacting and managing the smart hub, which enables the user to voice control their smart home. Again, a smart home is a building that has been fitted with the compatible infrastructures that can connect to the Google Home via Wi-Fi, which enables the user to execute voice commands to control internal and external components such as the lighting, the thermostats, home security system, and several appliances thru the use of smart plugs.

At the user’s verbal or pre-programmed request, the Google Assistant will turn the lights on or off; adjust the temperature; start brewing the coffee; activate or deactivate the alarm; and start the vacuum cleaner. Just like the Amazon Echo, The Google home also have a variety of entertainment capabilities. Google Assistant can search and stream music and movies, it is designed to provide a family fun experience by play games with or against the user; offering the user the options to learn, including providing help with homework, quizzes and trivia. Google assistant can also read bedtime stories. Google Assistant is also programmed to play and stream music from a streaming services such as YouTube, Pandora, Spotify and Apple. The Google Assistant also manages the user’s calendar and can send reminders to one’s smart phone. Additionally, the Google home provides an integrated social hub in that it will interact with many of the applications and provide several functions at the user’s voice command.

For example, if one has a banking application, Google Assistant can check the balance and transfer funds. Notably, the Amazon Echo seamlessly interacts with a wide variety of applications and integrate with the user’s amazon prime account which allows the user to shop online using Alexa. After conducting an independent analysis in several households, I discovered that more families own the Amazon Echo. It was also revealed that children were comfortable using Alexa, Admittedly, customer reviews on amazon’s website showed 61% , five stars rating, and 14% four stars rating, one customer wrote “Amazing technology although it’s kind of creepy” (“Amazon Echo”).Meanwhile, despite its unpopularity the Google Home received some excellent reviews. Specifically, on Bestbuy.com over 10,000 reviews were submitted of which 95% were favorable. Contrastingly, one customer wrote “Unfortunately, there are limitations to the usefulness of Home right now.” (“Customer Reviews”). A distinct advantage the Google Home has is providing accurate navigation and directions to locations. The Google Assistant makes more accurate determinations and provides more transparent, easier to follow instructions.

In brief, both the Google Home and the Amazon Echo have the same basic functionalities. In order to access the full functionality of each device, some investment in smart infrastructures and technology would have to ensue, such installing the smart plugs and the cameras, the thermostat and connections for the security cameras. While using both the Google Home and the Amazon Echo is fun for some users, some of the features require a lot of set up. As technology improves, enhancements in these areas are predicted. Having used both devices for a period of time I prefer the Amazon Echo. The Amazon Echo has more features that execute well; it manages my schedule with less errors and effort than the Google Home. Reminding me of important activities via my smart watch and smart phone even when I am away from home, which is very convenient. Ultimately, the two determining factors are the cost and personal preference when deciding to invite the Amazon Echo or the Google Home into one’s home. 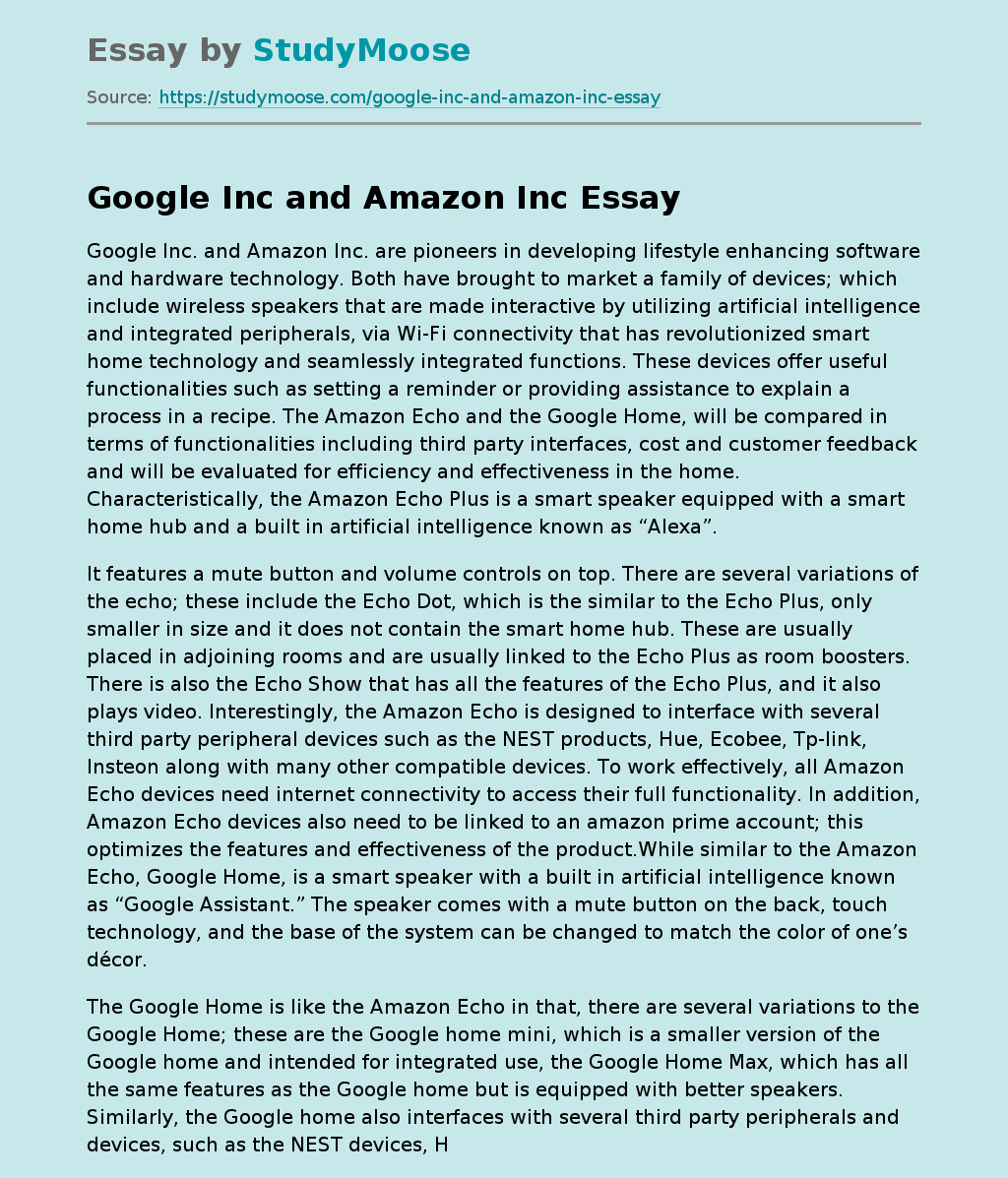