In her book, Amy Chua lays the claim that the globalization prescribed by western nations like the U. S. and its NGO counterparts like the WTO, promote market capitalism and democracy to the rest of the (3rd) world in a very universal and dangerous manner. She says that in many cases these two forces have benefitted different ethnic groups leading to ethnic hatred and violence. Market capitalism usually benefits ethnic minorities. The ‘laissez faire’ form of government regulation allows for small percentages of the population to amass a gross amount of wealth usually disproportional to the majority group’s share.

Don't use plagiarized sources. Get your custom essay on
“ Globalization and Ethnic Hatred & Backlash against Market-Dominant Minorities ”
Get custom paper
NEW! smart matching with writer

There are many examples of this around the world; 1% of population (Chinese descent) control 60% of the Filipino private economy, 3% of population (Chinese descent) control 70% of Indonesian economy, 1% of population (Whites) own 70% of land in Zimbabwe etc. While the rise of this “market-dominant minority” benefits from a liberal market economy, the majority ethnic group grows resentful of the market-dominant minority waiting for revenge and an opportunity to seize back what they see as rightfully theirs (land and economic control).

On the other hand, the spread of democracy gives political power to the ethnic majority. Instead of creating open-minded citizens that vote as co-citizens of a national community, democracy allows for demagogues to win votes and rise to power by scapegoating the market-dominant minority, demanding the nation’s land and wealth back. In Chapter 7 of her book Amy Chua looks at how democracy allows not only for ‘equality’ but in another sense ‘revenge’.

Impoverished ethnic majority groups in Rwanda and the Balkans that were subjected to decades of humiliation and economic destitution used democracy as a force for organizing violence against the highly despised market-dominant ethnic minorities. The combination of a free market democracy and a market-dominant minority usually creates three types of backlashes. (1) There can be an anti-market backlash by the majority toward the market-dominant minority. As exemplified in Zimbabwe where Mugabe started calling for the violent seizure of 10 millions acres of land form their white owners.

This has occurred in Yugoslavia and Rwanda. So the message of a prosperous future for the third world, through globalization through broad democratization and marketization is false. Marketization needs to be controlled and include substantial redistribution measures to appease and help the impoverished ethnic majority. Democracy needs to not only include universal suffrage but a set of substantive principles, “such as inequality under law or minority protections. ”

Chua argues those who to call the critics of globalization to be part of the anti-globalization movement are themselves narrow-minded. Critics of globalization want more democracy, but oppose global neoliberalism controlled by a few “masters of the universe” (Chomsky). Democratization and marketization cannot happen overnight but need to occur in a way that responds carefully to the ethnic makeup and economic classes that form the country undergoing globalization. I found myself agreeing with Chua on many points.

Democracy and economic liberalization has been promoted without careful precision. Failures to both democratize and bring liberal market economies to in Africa and post-communist nations have occurred out of blindly prescribing neoliberal globalization to impoverished third world nations. The principle that ‘the rising tide’ of globalization will benefit the third world has been discredited by many failures. Not all boats are suitable to this rising tide; ethnic divisions and the presence of market-dominant ethnic minorities are at the root of counter-productive forces.

Chua states at the end of the her introduction, that the “best hope for democratic liberalism lies with the market-dominant minorities themselves”. What’s left unclear from the excerpts is what she means by this. Her presentation of the market-dominant ethnic minorities has mostly been as an economically opportunistic group. Her suggestion that the ethnic-majority minority group has to act responsibly seems a bit juvenile. Instead perhaps a mixture of both the influence of conscious NGOs and informed Western nations could better address the expansion democratic capitalism within the Third World. 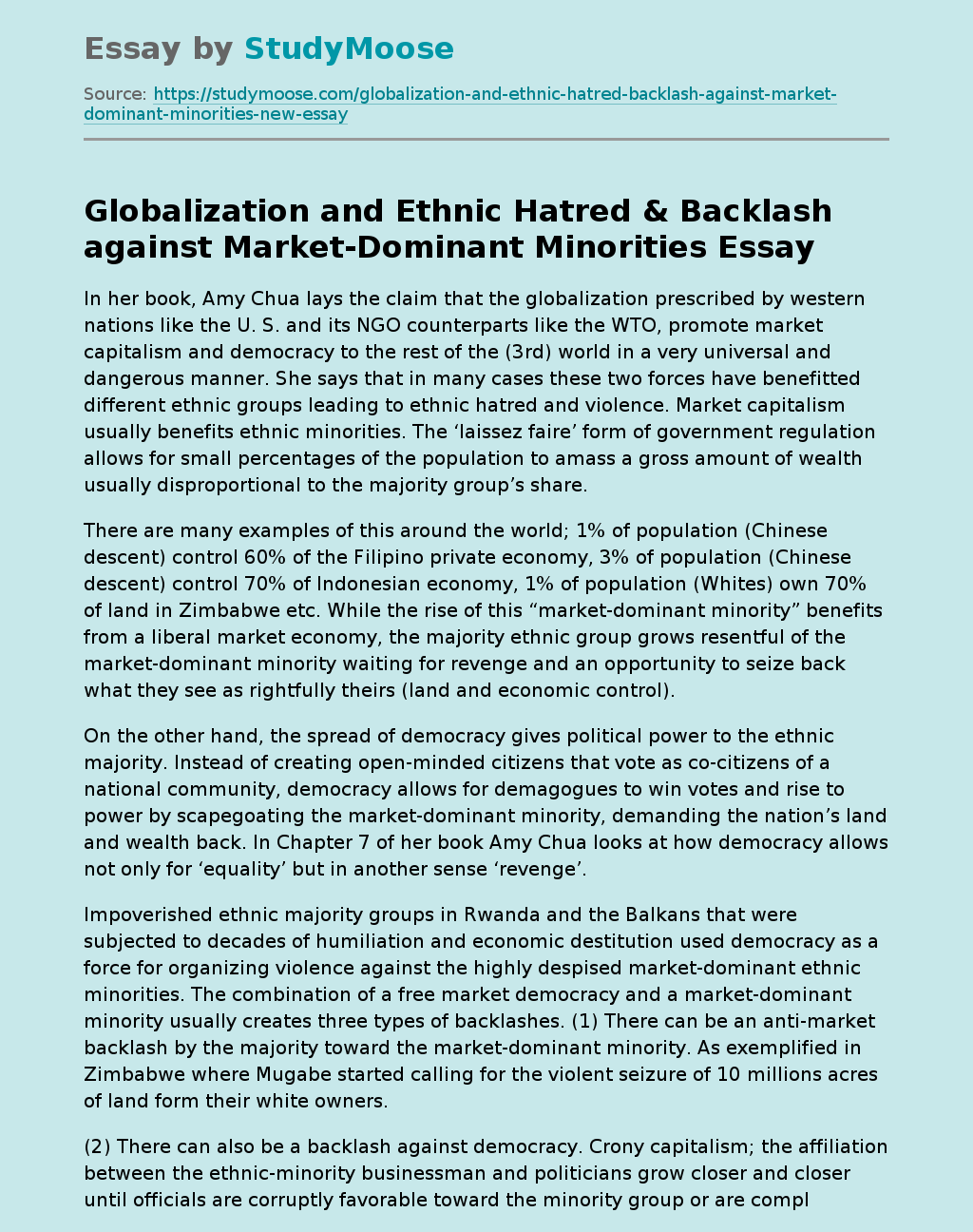