First Skapinker seemed somewhat confused by Cadbury’s decision to use all Fairtrade cocoa in the production of its popular ‘dairy milk’ product; Cadbury had only recently announced hundreds of job cuts, now the organisation was looking at raising its cost? Sounds ludicrous doesn’t it? However Cadbury’s motives become clear; Cocoa is Ghana’s biggest export after gold, however farms are unproductive and on average farms are only producing 40% of its potential output; and the children of cocoa farmers do not want to become farmers; with the cocoa industry in decline Cadbury needs to secure it’s supply chain and improve the productivity of its farmers.

Don't use plagiarized sources. Get your custom essay on
“ Globalisation: fair trade ”
Get custom paper
NEW! smart matching with writer

However like his fellow professionals Skapinker does not see the logic in propping up a dying industry.

A recent documentary Black Gold portrayed the breakdown of talks between the West and developing nations at a WTO conference; what was evident from the film was that the West is unrelenting in pursuing markets at the cheapest possible price no matter what the cost is to the third world; Skapinker concludes his article in defence of the chocolate giant declaring that they “had decided that its interest lies in long-term relationships with suppliers who earn a decent living” (2009); one doubts this and feels his earlier comment that “many companies approach to suppliers was to screw prices down and let them like it or lump it” (Skapinker, 2009) is the more likely for the future.

The most prominent debate that one has come across in looking at Fairtrade is the issue of whether the organisation is incentivising an industry with no viable future.

When neo-liberalism in the 1970s, the Western world genuinely believed that modernisation would eradicate poverty through the ‘treacle down’ effect; however in 2010 approximately 20% of the population share 82% of the worlds wealth (Mayo, 2005), and “one billion people are trying to survive on less than $1 a day”(Lawrence, 2008); doesn’t appeared to have ‘treacled’ down yet! What confuses one is the argument that developing nations can prosper through the mechanism of ‘free trade’;

As Pollard argued ‘free trade’ will beat poverty; but he also points the blame of poverty of the tariff barriers imposed by for instance the European Union; thus African, Caribbean and Pacific countries cannot trade in the secondary industries, and are forced to become reliant largely on agriculture; however the developing world did not industrialise solely through the methods of farming.

It has been argued that “one of the most important debates in economic history… concerns the extent to which profits from the slave trade stimulated industrialisation in Britain”(Sheller, 2003, p82). Britain, an example of a developed nation was able to build industries for example in manufacturing and financial services from the profits of the slave trade, which enabled them to develop into the nation one sees today. ACP countries through mechanisms such as Fairtrade are forever locked into an industry that is faced with the challenges of poor economies of scale, low productivity, low technology, surpluses, un-arable land, and poor weather conditions.

Even Barbara Cowther chairperson of the movement admitted it had no policy on mechanisation; which is “central to agricultural development” (Chambers, 2009). These countries are being encourage to continue producing the same crops that led them into poverty. Critics have argued that Fairtrade is “wedded to an image of a notional anti-modernist rural idy” (Chambers, 2009), however they have also argued “free trade is a more effective strategy for reducing poverty” (Gray, 2008) on the basis it will encourage countries to industrialise and develop more efficient farming practices. However the Western world didn’t modernise through the farming industry and neither will the third world; John Madely states: “free trade has enslaved the hungry rather than freed them.

Trade can help to achieve food security, but only if it is democratic and free from corporate control; only if It helps rather than hinders the poor “(2000, p3), and this is why one would conclude that while the notion of Fairtrade is democratic in theory: producers can gain a fair price for their product and profits are ploughed back into the community building schools and hospitals for the future; however in practice one would question how the mechanism can operate in the very system it was set up to challenge; free trade.

Both consumers and retailers alike partake with thoughts for themselves rather than those its meant to help; As Barrientos and Smith argue: “the uptake of Fairtrade by UK supermarkets relates to the fact that they are engaged in a fierce battle for market share” (2007 , P106).

Even Tesco’s Hamish Renton said: “We wouldn’t be selling this stuff if there wasn’t something in it for us” (Nichollls & Opal, 2008); retailers will pursue any viable market at any cost. And as for the rising sales from UK consumers; one would agree with the arguments of the broadsheets; the product is a convenient way to ease consumer’s guilt; Sheller argued “why should it take revulsion at the taste of blood-infused sugar to move middle-class consumers to action, rather than simply revulsion at the inhumanity of slavery” (2003, p92); why has it taken the world decades to realise the unjust nature that has made a few rich and the expense of peoples lives.

Madely stated that trade can achieve food security however only if it is free from democratic and corporate control and since theorist have determined that “globalisation has eradicated the role of nation states” and thus there has been a shift in power from states to markets, there will never be food security for the third world. Engels once said that “a few have been suppressed in order that a few might be developed more fully”, ironic since Engels also argues “Are they not all human beings with the same qualities and powers”, one would assume not in the new world order that is Globalisation. 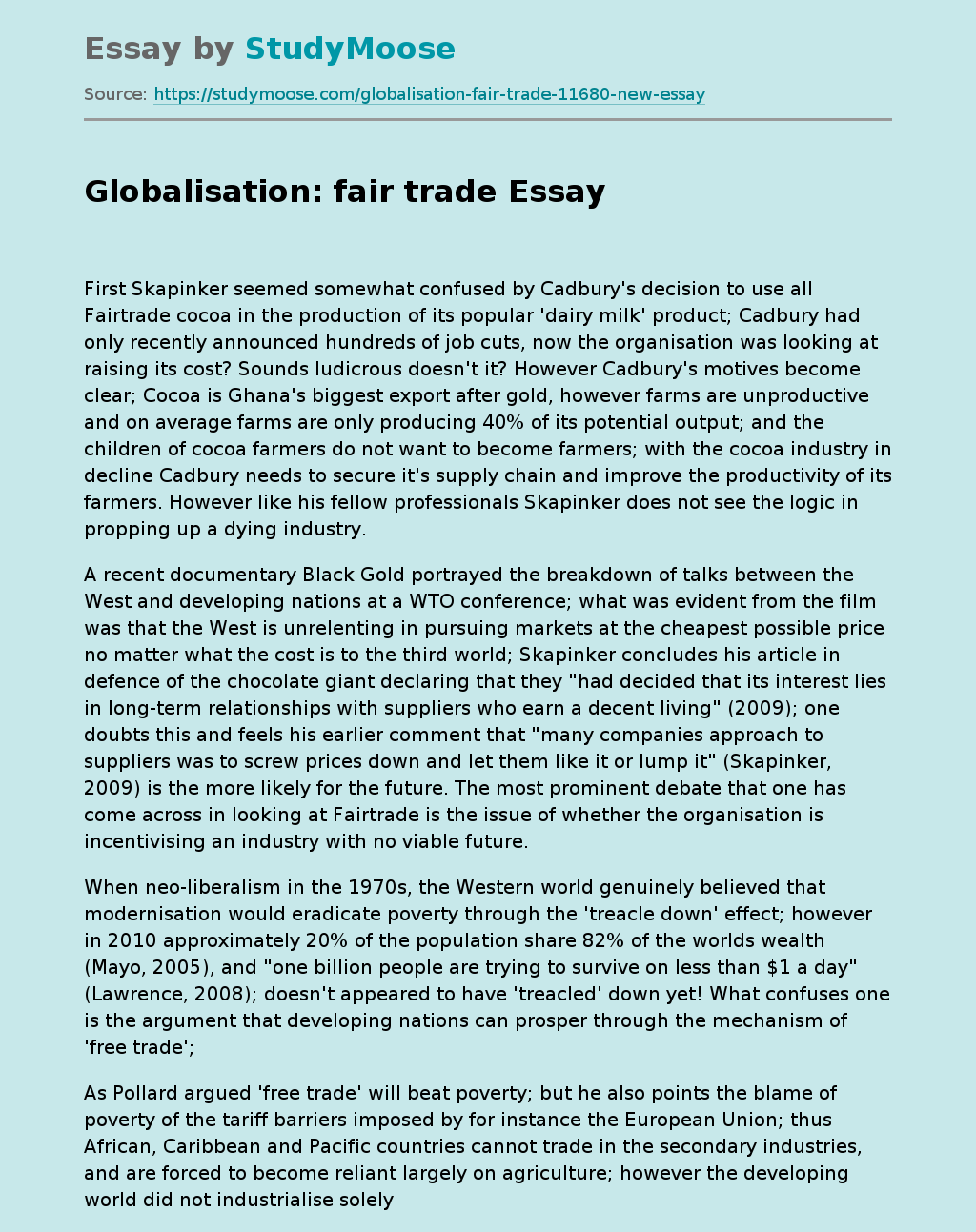