Globalisation and the Coca-Cola Company

Today, Coca-Cola is one of most well-known brands in the world.

This company has continued to gain momentum and growth, capitalizing on the rapidly expanding beverage industry and ranking as the largest beverage company in the world. With its push for global market share, Coca-Cola now operates in over 200 countries with over 84,000 suppliers. Currently, over 70% of Coca Cola’s business income is generated from non-US sources (Coca-Cola Company, 2012). In over a century, Coca-Cola has grown the company into a multi-million dollar business.

Don't use plagiarized sources. Get your custom essay on
“ Globalisation and the Coca-Cola Company ”
Get custom paper
NEW! smart matching with writer

However, the road to success has not always been easy for Coca-Cola. Many countries have banned the use of Coca-Cola products, claiming that these products are “threatening public health” and “encouraging obesity.” Many labor practice suits have been filed against the mega beverage company with accusations of “child labor sweatshops” and “discrimination in providing health care benefits to workers.” In addition, the beverage industry has been flooded with competitors introducing new soft drink products, such as Pepsi, along with soft drink alternatives, such as Gatorade, bottled water, fruit juice, and energy drinks.

In light of the obstacles Coca-Cola has overcome, the company has remained true to its commitment to provide quality, refreshing, and satisfying products to consumers. In order to ensure each product tastes the same across the globe, Coca-Cola continues to keep the beverage recipes secret with tightly controlled manufacturing facilities. CocaCola has never lost sight of its goal to be the best beverage company in the world. Now, let us take a closer look at Coca Cola’s journey to globalization. Coca-Cola’s Journey to Globalization

Founded back in the 1880’s, Coca-Cola was developed by John Pemberton as an American iconic brand known for high quality and consistency. During this period in history, storekeepers demanded pre-packaged products with brand name recognition. Coca-Cola met these demands with its iconic red and white logo and brand marketing to instill confidence in the consumer that the Coca-Cola product would taste the same everywhere it was purchased.

These strategies soon became the foundation for CocaCola’s plan to expand globally. In the early 1900’s, Coca-Cola started to globalize. Bottling plants were initially built in Cuba and Panama as the US military spread to these regions, causing a rise in demand for the Coca-Cola brand. These plants proved to be successful, reducing shipping and delivery costs typical in these regions. Soon after, additional bottling plants opened in Hawaii, Puerto Rico, and the Philippines. These efforts launched Coca-Cola’s Saylor URL: www.saylor.org/bus208#2.5.6

The Saylor Foundation investment in testing foreign markets for future expansion opportunities. By 1926, CocaCola had established foreign relationships and plants around the world in support of its newly created center of global operations.

Coca-Cola continued on its path of mass production and rapid expansion for the next several decades. Local branches along with local partnerships to produce and distribute the signature Coca-Cola products were established throughout the world. The ending of World War II and the Cold War marked the signature period in which Coca-Cola had established itself as a true global corporation known for its efficiency and worldwide capabilities.

Next, let us take a look at three key strategies employed by Coca-Cola to support rapid growth and expansion across the globe: global marketing strategies, product differentiation, and technology.

Global Marketing Strategies
Coca-Cola’s marketing strategies played a significant role in successfully globalizing the company. The company’s popular advertising slogans and
catchy jingles played into the hearts and minds of people around the world. Some of the most remembered advertising slogans include:

Coupled with these slogans, songs were used to have consumers remember the brand. One of the company’s most popular jingles was known as “I want to buy the world a coke,” produced in 1971 by Billy Davis. The commercial featuring this song portrayed a world of hope and love produced by a group of multicultural teenagers on top of a hill. This commercial went down in history as one of the most well-known commercials of all time.

Product Differentiation
Another key factor that has supported Coca Cola’s globalization vision is the company’s ability to customize the product to meet the needs and wants of individual markets. For example, Coca-Cola has been able to tailor its product line to meet the needs of the younger consumer by offering Powerade and flavored Coke products, such as Cherry Coke and Vanilla Coke. Additionally, the company is meeting the needs of the health conscious, older consumer with Diet Coke, Vitamin Water, and Odwalla products. CocaCola has invested significant time and money into researching and understanding different marketing segments based on lifestyle, age, and income in order to accurately develop and market its products.

Packaging differentiation has also played a key role in how adaptable the Coca-Cola product is to various market segments. Functional packaging has been used to make the products available in different sizes and forms, including glass and plastic bottles, aluminum cans, and fountain drink dispensers. The company considers various shapes and sizes of the bottles and cans to ensure easy stacking and vending machine dispensing. To promote the company’s commitment to environmental sustainability, all packaging materials are designed to be recyclable and labeled accordingly for easy consumer identification.

Technology
Technology advances contributed to Coca-Cola’s ability to globalize rapidly throughout the 20th century. Product transportation became more efficient and cost effective with the development of bigger and faster semi-trucks, cargo ships, jet aircraft, and trains. Coca-Cola was able to manufacture and ship products quicker and farther to market segments that were unreachable before these transportation improvements.

In addition, technology advances became the driving force behind the ease and speed at which information was available. Distributors and warehouses were able to more accurately track inventory levels and fill order shipments, resulting in lower overall operating costs. Computerization also led to slashed product costs and improved efficiencies. Computerized and automated manufacturing equipment increased the speed and volume in which products were produced. These technological advances enabled Coca Cola to compete on a global scale, selling the well-known brand of products across the world at competitive prices.

Summary:
Coca-Cola is one of the most well-known brands in the world, operating in over 200 countries.
While the global marketplace has presented numerous opportunities for CocaCola, the company has also encountered global attacks on the nutritional value of its products, along with unfair labor practice accusations.

Product differentiation, such as offering different beverages in flexible packaging options, allowed Coca-Cola to customize the product for different market segments.
Technology advances, including product transportation, telecommunication, and computerization, became the driving force behind Coca-Cola’s ability to capitalize on the rapidly expanding marketplace across the globe.

Globalisation and the Coca-Cola Company. (2016, Apr 25). Retrieved from https://studymoose.com/globalisation-and-the-coca-cola-company-essay 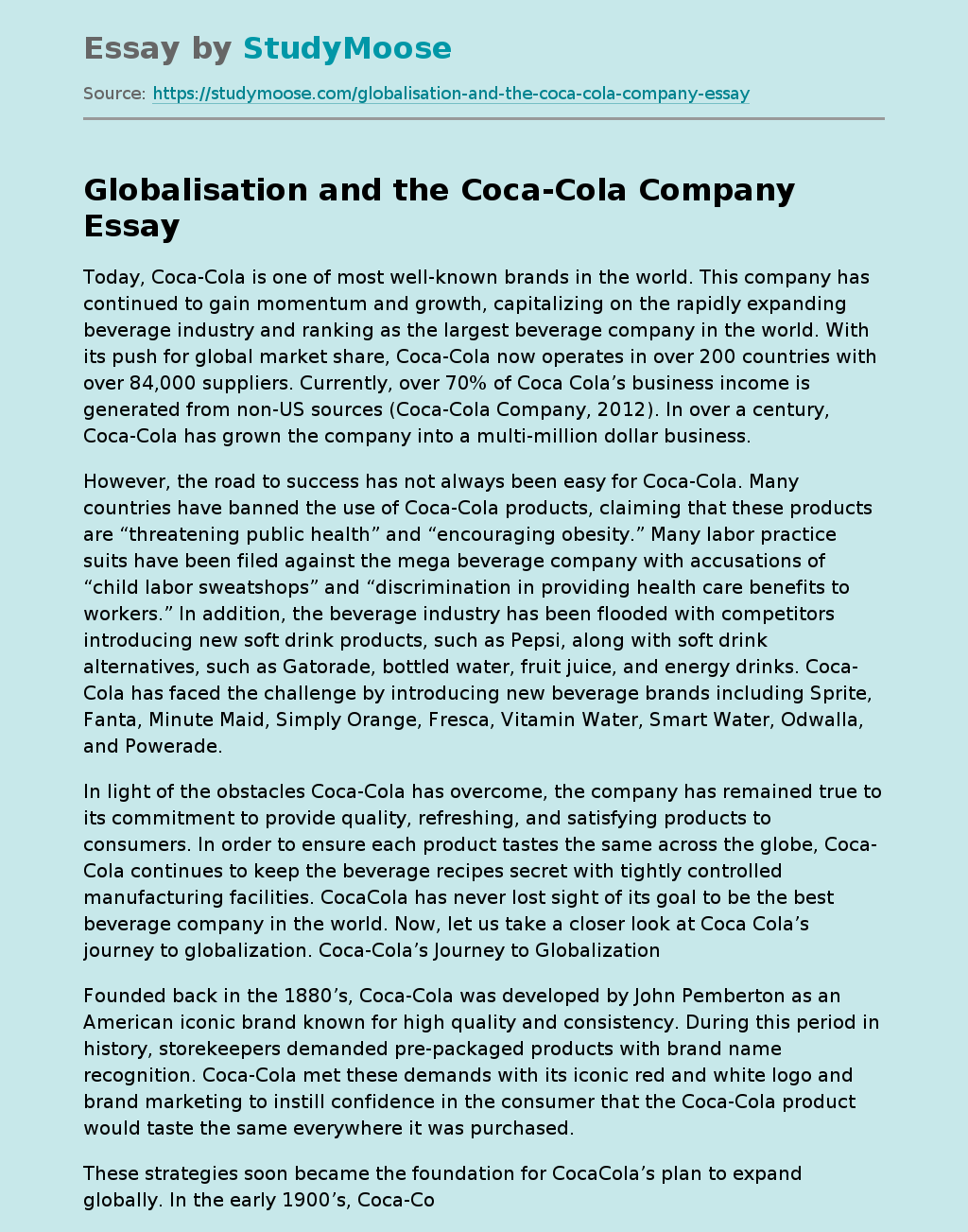