"The Crucible" by Artur Miller

Cheever goes out to fetch Abigail

The audience is left in suspense through the short, ascending in volume conversation while Cheever goes out to fetch Abigail. As the audience know how much power Abigail has they are waiting to see whether Mary Warren will still stick to what she is saying or cower under her power. Tension is increased when Hathorne asks Mary to faint, if it were only pretence. Mary Warren is obviously not able to faint as she is not hysteria and cannot do it alone.

Don't use plagiarized sources. Get your custom essay on
“ “The Crucible” by Artur Miller ”
Get custom paper
NEW! smart matching with writer

Mary warren still shows a lot of resistance to Abigail’s power, but Danforth and the court are deeply affected by it. Abigail plays to Danforth’s guilt. She says ‘I have been near to murdered every day because I have done my duty pointing out the Devil’s people’. Danforth weakens and she gains more power. However, Abigail knows she still won’t be able to win, so she lies and acts hysterical, knowing the others would actually enter hysteria, for self-preservation.

This hysteria creates tension because usually when the girls are in hysteria they blame other people for witchcraft so we are left wondering who will be accused and what will happen next: will Proctor find another way to prove his wife is innocent or will the accusations continue until there is no-body left in the village. Mary Warren does not subject yet, but is saved by Proctor.

As a last attempt to save his wife, his name and Mary Warren John Proctor accuses Abigail Williams of lechery.

He says ‘How do you call Heaven! Whore! Whore!’ by doing this he puts Abigail on the spot, if she is found guilty then because of theocracy God can’t work through a sinner, this could mean that the whole case collapses. Danforth does not let this allegation pass, but asks for proof. Danforth remembers a statement made earlier by John Proctor earlier in this act about his wife: ‘That woman will never lie’. Danforth therefore asks Proctor whether this is true and calls for Elizabeth Proctor, the one woman who can prove that Abigail is a whore and stop the witch-hunt. Again the fate of the village lies in this judgement: If she is then they think that God couldn’t possibly work through her, but if she is not then is that the end for Proctor and his wife?

Elizabeth arrives outside the vestry room

John Proctor and Abigail are commanded to stand with their backs towards the door, which Elizabeth is behind. This creates suspense because the audience are waiting to see whether Elizabeth will be ironic and lie to save her husband. The tension is mounting because of the suspense and tension created because of their positions, there is no way of Proctor telling Elizabeth that the court know. Ironically Elizabeth proctor does lie to save her husband, she tries to help him by calling him ‘goodly’ and ‘righteous’. However at this point, the boiling point of the crucible (Melting pot), when asked if her ‘husband (is) a lecher’, she replied, no sir. From this point onwards Abigail Williams knows she has lost John Proctor so all she can do is preserve herself by accusing Mary Warren of witchcraft. Abigail is very clever and therefore new that Mary would preserve herself by entering hysteria and when provoked would accuse Proctor of being ‘the Devil’s man!’

Act three is partly about love, trust and truth. We know fro act three that their relationship is based upon love, trust and truth. John Proctor trusts Elizabeth so much that he puts his life in her hands. In act four we see that this works both ways Elizabeth Proctor chooses not to help John to decide what he is going to plea but trusts him to do make the right decision, it is not my soul, John, it is yours.’ Elizabeth does not tell the truth because of her love for him, she ironically lies to try and protect him.

After act three the play has a quick deflation. Proctor decided to admit to witchcraft following discussing his plea with his pregnant wife. However when Danforth, who must have everything done according to the procedures, asks Proctor to sign his testimony admitting to witchcraft, he refuses. He tries to avoid having to sign it by saying that they have all witnessed it’. However Danforth will not accept and so Proctor, being so proud, decides to tear the paper to save his name and therefore subject himself to the fate of hanging.

Particular characters in this play

There are a few particular characters in this play however that summarise the witch-hunts and their source and consequences. Rebecca Nurse was a sensible, upright and respected member of the community. In act one she tries knows real reason for the girls behaviour, she has a lot of common sense and experience in children. It is a wonder how she came to be accused in the first place. My feel that she was accused because of her husband’s ancestors had rows with the Putnam’s over land. I believe this because it was Thomas Putnam’s daughter (a member of the group of hysteria-affected girls) who accused her. Even though she had a great kind reputation the immense power of the girls caused the court and the village, to damn her for witchcraft and she was hung.

Giles Corey was an old man of eighty-three managed to escape from being hung. He was a clever, canny man, who was very braved. His fate was very different and much worse than all the others. Giles Corey didn’t plead guilty or innocent to witchcraft, and as Elizabeth Proctor tells us he couldn’t be condemned without him answering aye or nay to the indictment. Therefore Corey was stoned to death, I think he did this to make sure his farm went to his sons, as by law, he was still a Christian. This showed amazing courage and I believe he was the only character to stand up for his true beliefs throughout the entire play.

I think that Reverend Parris was the character that changes his beliefs most drastically. After the fever had died Parris was voted out of office and he disappeared. Abigail also disappeared after losing her main target and was rumoured later to have turned up as a prostitute in Boston. Elizabeth proctor remarried. The power of theocracy in Massachusetts was broken. However the living victims and the dead families did not receive compensation from the government until 20 years after last execution

He puts Giles Corey’s deposition in before Proctor’s to create time all the time in act three leaves the audience in suspense as we know about Proctors deposition but wonder if Mary Warren will be brave enough to see it through to the end. Another of the biggest ways Miller cerates tension us the tension between the characters, Abigail and Mary, Abigail and Proctor, Hale, Parris, Danforth. He uses these for conflict and dramatic effects. I think that Arthur Miller creates and combines tension and suspense in the correct places to create a very successful, affective and moving play with deep moral issue in an appropriate way.

"The Crucible" by Artur Miller. (2020, Jun 02). Retrieved from https://studymoose.com/giles-coreys-deposition-5861-new-essay 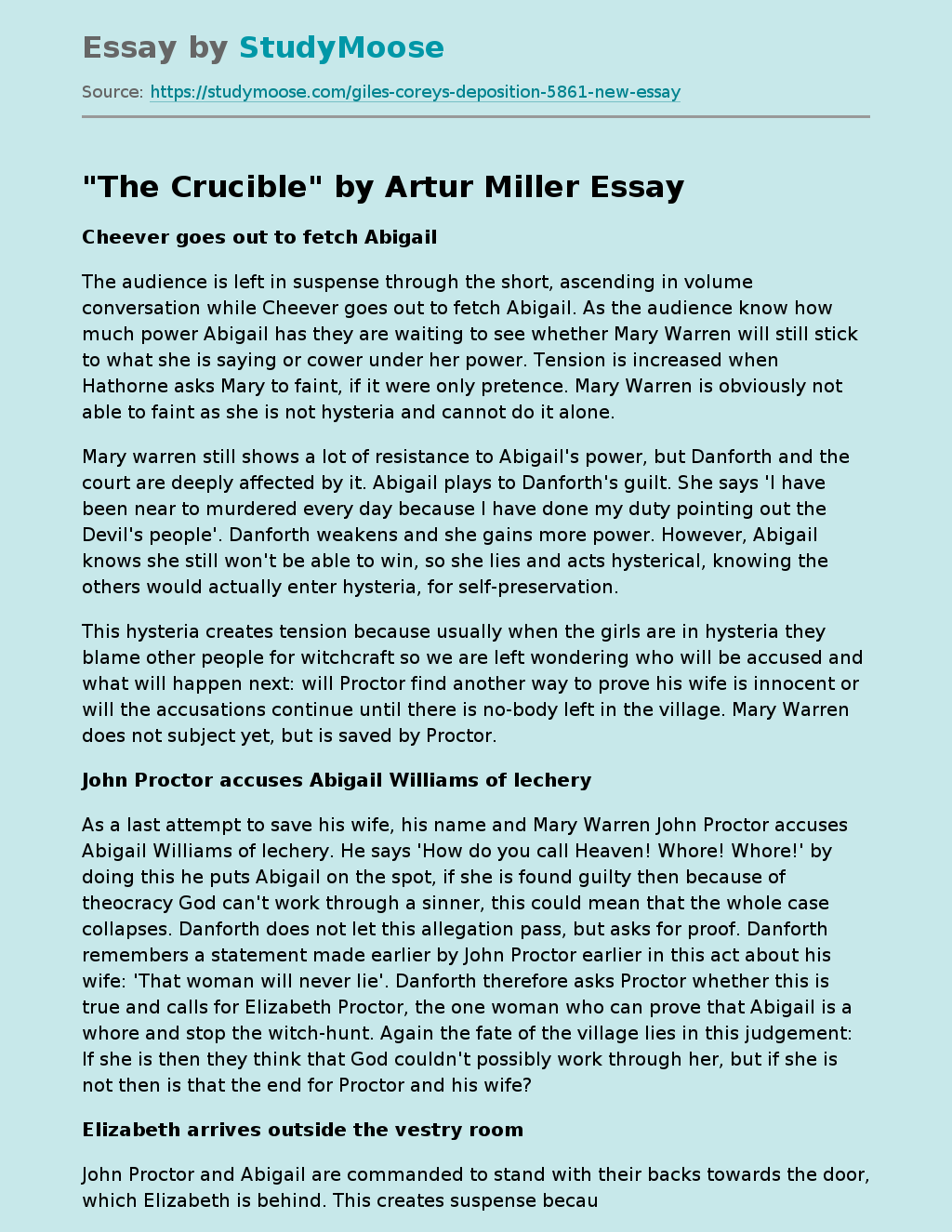