George and Lennie in "Of Mice and Men"

Have you ever heard of the characters George and Lennie? They have big roles in the book Of Mice and Men. This book is about George Martin and Lennie Small having completely different personalities but Lennie couldn’t live without George, George would be alone in the world without Lennie. The author of the book Of Mice and Men wanted to provide evidence of the differences between Lennie and George. My main points are going to focus on how bad and good, Lennie and George’s relationship is.

Don't use plagiarized sources. Get your custom essay on
“ George and Lennie in “Of Mice and Men” ”
Get custom paper
NEW! smart matching with writer

Being in a true friendship means that you are loyal even if you are in a bad situation.

‘With us it ain’t like that. We got a future. We got somebody to talk to that gives a damn about us…If them other guys gets in jail they can rot for all anybody gives a damn. But not us’ says George. This quote that George said is great friendship because not once did he say just himself, he also said Lennie was with him.

That is also loyalty because to Lennie it makes him think that George is always going to be with him.

After George said that Lennie said, ‘But not like us.’ So to Lennie, it means a lot to him that George keeps reminding him that the story about them being together. Lennie and George have very different personalities, but there friendship and loyalty is a very big part of the book. Like that quote George says it to make Lennie happy that they are together, but they also have some downsides in their relationship.

Lennie urges, ‘You said I was your cousin!’ George replies, ‘That was a lie. If I was relative of yours, I’d shoot myself.’ This quote is not very nice because George said that if he was relative to Lennie he would have already shot himself. At the beginning of the book, George told Lennie that he was a relative of his because George has been taking care of Lennie since his aunt had passed away. This is not a good friendship way to go because he told Lennie a lie. In friendships, you don’t want to tell lies because then that loyalty is going to break, but since Lennie doesn’t have anyone else to go with, he will still stick by George’s side because Lennie forgives easily.

‘I had him so long. Had him since he was a pup. I herded sheep with him, ‘ He said proudly, ‘You wouldn’t think it to look at him now, but he was the best…sheep dog I ever seen.’ This quote is from Candy. He is talking about his friendship with his dog. He loved his dog very much. In the middle of the book, Candy came into the shed with his dog and Carlson told Candy that he could quickly shoot the dog in the back of the head for him so there was no pain because the dog was old and it smelled really bad. Candy was sad about it because it was his best dog. Carlson ended up killing the dog and Candy never got off the bed nor looked at anyone. His friendship with his dog meant the world to him. But friendships can end quickly.

Even when friendship and loyalty is a big part of the book, there are many different themes in the book that play big roles in it. One big theme is dreaming, Lennie and George had a dream about having their own ranch and Lennie wants rabbits. But if you don’t have that friendship and loyalty you can’t have that dream together. John Steinbeck wants the readers to get engaged in the book. He wanted to point out that in the Great Depression anything could happen, but when you have a close friend you can get through anything with them by your side.

George and Lennie in "Of Mice and Men". (2020, May 21). Retrieved from https://studymoose.com/george-and-lennie-in-of-mice-and-men-essay 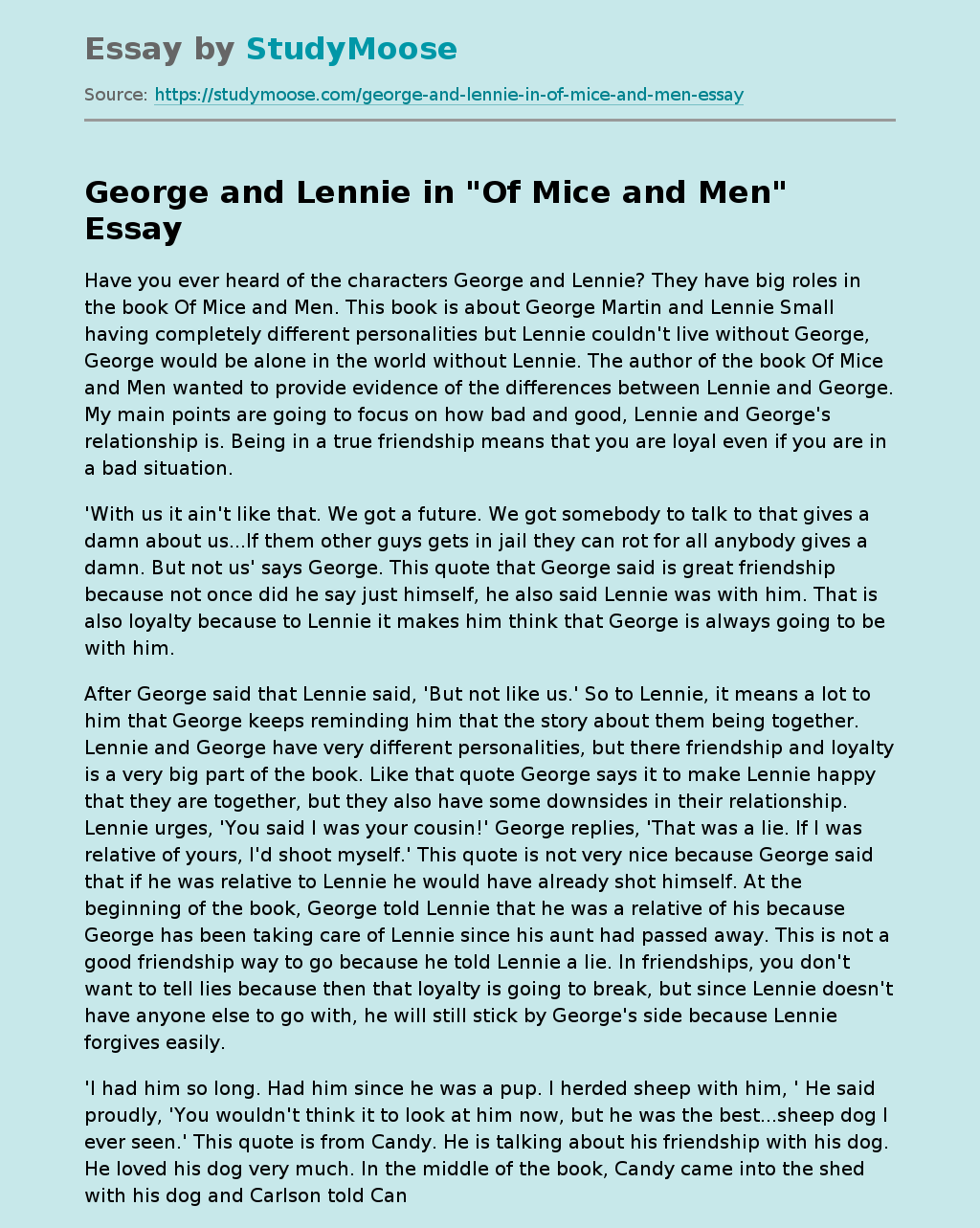