Don Anselmo is the protagonist of the short story “Gentleman of Río en Medio” written by Juan A. A. Sedillo. He is an old man descendent of Mexican Americans who born and lived up in Río en Medio, New Mexico. He is a respectable, humble and generous man who cares a lot of the people around him. The most important value that represents Don Anselmo is demonstrate through the development of the story is the importance of having a family.

Don't use plagiarized sources. Get your custom essay on
“ Gentleman Of Rio En Medio ”
Get custom paper
NEW! smart matching with writer

For Don Anselmo the family is a very important value. Its importance is present from the beginning to the end of the story. Don Anselmo has a particular form to introduce himself in the meeting he has with Senator Catron. Before considering a new offer proposed by the Americans, the ones who want to buy Don Anselmo’s house and property and the principal purpose of the meeting, the old man starts a conversation about his family.

During this conversation, he emphasizes how proud he is for having a very big family in which he is like the “patriarca”. When Senator finally had the opportunity to make the new offer, Don Anselmo does not accept it immediately. It is possible to infer that the old gentleman does not respond because he was thinking in his family and community. He feels that he cannot accept this offer because he does not deserve more money for sell something that he consider a gift from nature to his family.

At the end of the meeting Don Anselmo decided to reject the new offer in order to respect the value of nature and the love that he and his family feel for it. (By Nicole Ferrer)

Other reason to say that the highest value of Don Anselmo is the family is that almost every person in Rio en Medio are they descendants. In several parts of the story “Gentleman of Rio en Medio” the author emphasizes using the characters the importance that the family has to Don Alselmo. Also he says in the story that the children of Rio en Medio are his sobrinos and nietos, part of his family. Like the oldest man of the village, the people there belong to him. For this reason, he demonstrates the responsibility that has with his family that is the people in Rio en Medio. This show us why he don’t accept more money for the sale of his land or the reason to says that the trees aren’t of he, they belong to the children in Rio en Medio. Once more time we realize that the value best describe Don Alselmo is having a family because he has a responsibility with his descendants and a respect to them. (by Edrick Negron)

The last reason to say that the most important value that guides Don Anselmo’s behavior in “Gentleman form Rio en Medio is having a family because every time a child was born in Rio en Medio, Don Anselmo planted a tree for that child (par.11). It was like a birth gift, so that tree belong to the child. When the Americans complain about the children trespassing the fence to play at the orchard after Don Anselmo sold it to them, they wanted him to stop the children for doing it. Since the children were part of Don Anselmo’s family they thought he had the power to stop it. When they confront Don Anselmo he said that he couldn’t do a thing about it because the trees belonged to the child and not to him (par. 12). When Don Anselmo didn’t sold the trees because he couldn’t; the Americans bought the trees from every single children. (By Bryanda Diaz)

Don Anselmo’s biggest value is having a family. Three reasons why he is a family man are presented in the story. Been a family man includes being caring and Don Anselmo demonstrates this in the story when he say he gave every child in the city a tree as a birthgift. Also it says he is proud of his big family; every child in Rio en Medio is his niece or grandchild. Having a family includes being honest, caring, loving and have wisdom, and Don Anselmo have all of this. 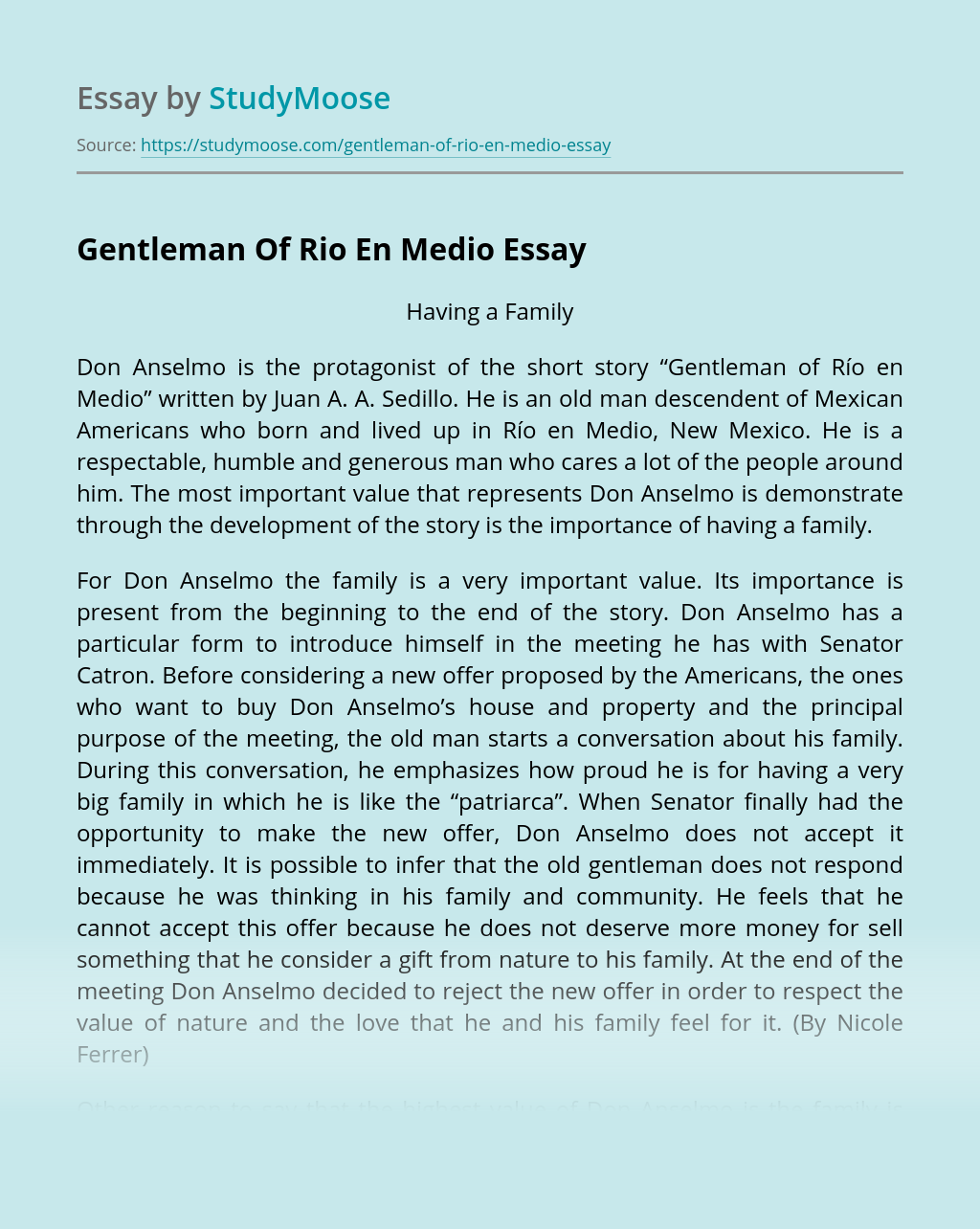