In Chinua Achebe’s novel Things Fall Apart, the Ibo society has a strict system of behavioral customs that are assigned by gender. These customs restrict the freedom of Ibo woman and help to reinforce generation after generation the notion that Ibo men are superior to women. In Achebe’s essay An Image of Africa: Racism in Conrad’s Heart of Darkness, he claims that Joseph Conrad’s Heart of Darkness, despite it’s insights, ought to be eradicated from literature as an appropriate piece of work on the argument that it is racist.

Don't use plagiarized sources.
Get Your Custom Essay on Gender Roles in Things Fall Apart Just from $13,9/Page

Achebe focuses on gender roles and avoiding stereotypes to dismiss the racist attitude towards Africans in his novel by bringing the reader down to the level of his unbiased narration of a historical fiction novel. In Things Fall Apart, Achebe is cautious to avoid typical stereotypes describing white men. When the first white man is introduced, he is described as “… not an Albino.

He was quite different” his presence is foreign and not understood, but not dangerous. Achebe creates no account of the man being atrocious.

In fact, throughout the entire story Achebe consistently attributes those same qualities to the white men later on in the novel; with the exception of The District Commissioner, who is described as “strict and unreasonable”. Achebe even puts white men in a good light; Mr. Brown constantly reminds the people of Umuofia that they should send their children to his church to learn to read and write so that other white men will not come to institute a new government and destroy their culture.

By not negatively chronicling that white men are evil through narration and characterization, Achebe successfully lets loose the bounded stereotype of evil white men that are against African culture. Achebe affirms that in Ibo society, the condition of weakness is strongly associated with women. Therefore, a man being declared “woman-like” is an extreme insult. Unoka, Okonwko’s father, embodies the counter-values that stand in opposition to the rigid social ideal of the tribe.

Okonkwo is ashamed when he learns that “agbala” was not only another name for woman, it could also mean a man who had taken no title when this insult is applied to his father. By stereotyping based on titles that are indigenous to Ibo culture rather than stereotypes that are demeaning to a race, Achebe is able to maintain an unbiased narrative in Things Fall Apart. Achebe does not completely demean woman in his story; it only seems as though that this is the case because he creates distractions to shy away from racism.

In Ibo society, women marry to add to their father’s wealth, become subservient to their husbands, continue on their husband’s legacy through child birth and emanate the essence that women know the secret of life, since they are the source of it. This is evident when Uchendu ask “Can you tell me, Okonkwo, why it is that one of the commonest names we give to our children is Nneka, or ‘Mother is Supreme’? We all know that a man is the head of the family and his wives do his bidding. A child belongs to its father and his family and not to its mother and her family.

A man belongs to his fatherland and not to his motherland. And yet we say Nneka–‘Mother is Supreme. ‘ Why is that? ‘ ‘A man belongs to his fatherland when things are good and life is sweet. But when there is sorrow and bitterness he finds refuge in his motherland. Your mother is there to protect you. She is buried there. And that is why we say that mother is supreme. ‘” Although the characters in the story never recognize the full capacities of women, they are described as emotionally strong.

Achebe has an amazing gift for spotting bias that hides in plain sight; adapting against those anecdotes and historical asides, he creates something resembling a coherent story that necessitates dropping much that is important. Things Fall Apart possesses very deep meanings beyond that of avoiding stereotypes. Achebe purposely degrades women to not come across to the reader as racist, however his main priority is conveying lessons that are forgotten through literature. People who pick up a copy of Things Fall Apart will embark on journey that will let them see the subjugation of the African natives from their own perspective. 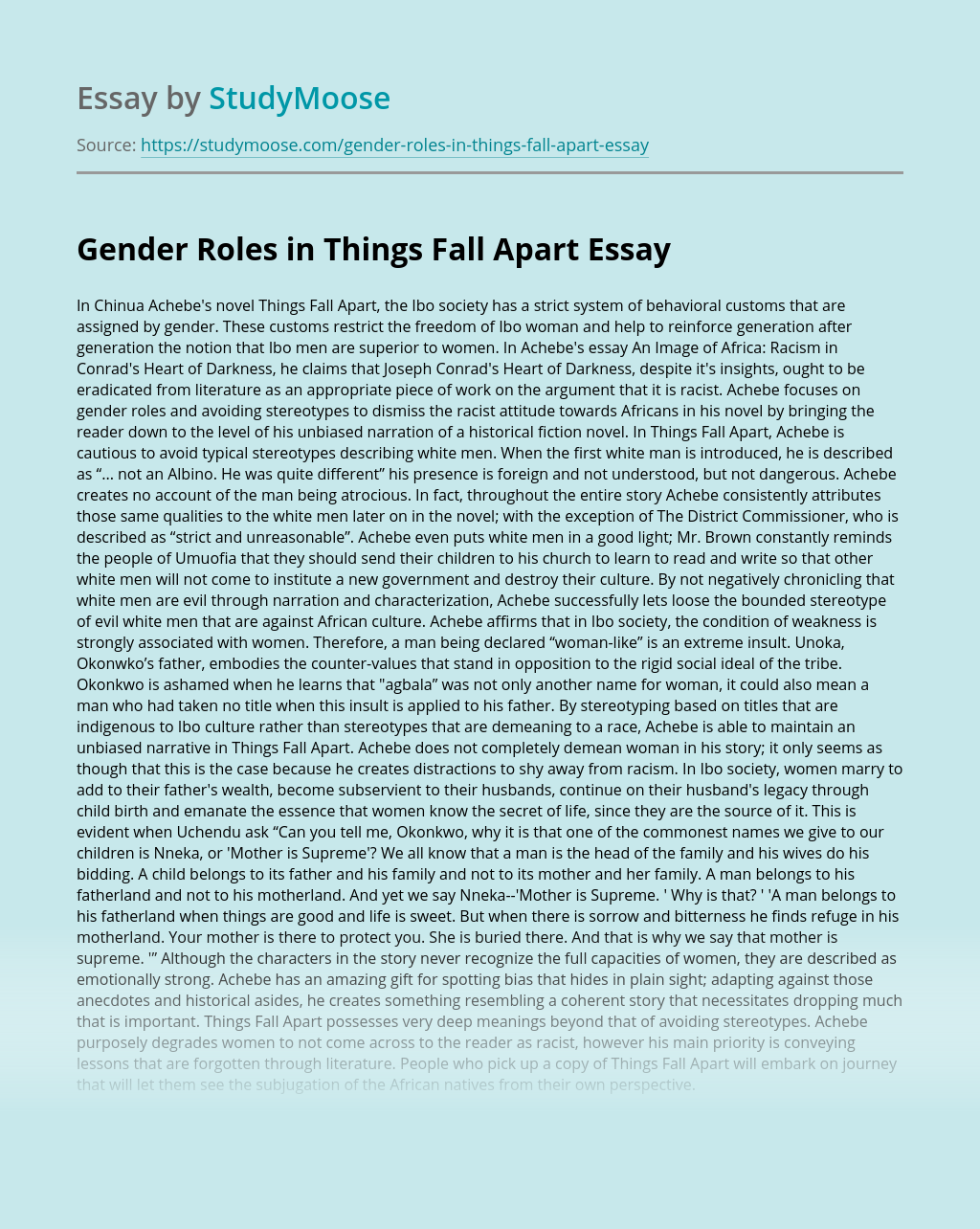 Rate this post Umofia is a place where people have a different life style then there is in a modern society. People in Umofia are both civilized and savage at the same time. There are both of the civilized and savage sides of the society but mostly they are old-fashion minded. For example, in Ibo...

"A Martian Sends A Postcard Home" by Craig Raine

Get Essay
"The New Liberal Arts" by Sanford J. Ungar

Rate this post In Sanford J. Ungar’s ‘The New Liberal Arts’ he discusses the pros of going for a liberal arts degree. He talks about common misperceptions about liberal arts and then gives his opinions on them. He gives his perspective of a liberal arts college and gives examples as to why liberal arts is...

Artificial System Of Sand Is Also Called The Mechanism Sand

Rate this post Introduction On the of July 2002, a sheep’s heart was examined by dissection. The heart is a muscle in all mammalian bodies that is used to pump blood and nutrients throughout the body. A sheep’s heart was used in this prac because like the human heart it has four chambers and is...