Young people who come to believe they were born into the wrong sex are more prone to post-traumatic stress disorder, physical and violent abuse, and self – harming behaviour. An American study that questioned young adults about their childhood beliefs and practices found that 39% of women, who experienced the highest level of gender uncertainty, endured some type of abuse, as did 30% of men, according to Andrea L. Roberts, PhD, of Harvard School of Public Health in Boston, and colleagues.

And among children and teens evaluated for medical intervention to suppress puberty or for hormone therapy, 44% had been given a psychiatric diagnosis — most often depression — and 21% reported self-mutilation, reported Norman P.

Don't use plagiarized sources. Get your custom essay on
“ Gender Dysphoria The Social Cultural And Scientific Implications Sociology ”
Get custom paper
NEW! smart matching with writer

It is clear that one’s gender identity can be and is influenced by numerous factors, in particular chromosome type, genitalia, the environment and social factors.

Many people consider themselves to be cisgender, that is, belonging to either the male or female gender corresponding to their “assigned at birth” sex of male or female.

Before the 20th century, someone’s sex would be determined entirely by the appearance of the genitalia, but as chromosomes and genes came to be understood, these were then used to help determine true sex. Those defined as women, by sex, have genitalia considered female, as well as two X chromosomes; those viewed as men, by sex, are seen as having male genitalia, one X and one Y chromosome. However, some individuals have a combination of these chromosomes, hormones, and genitalia that do not follow the traditional definitions of “men” and “women”.

In addition, genitalia vary greatly or individuals may have more than one type of genitalia. Also, other bodily attributes related to a person’s sex (body shape, facial hair, high or deep voice, etc.) may or may not coincide with the social category, as woman or man. A survey of the research literature from 1955-2000 suggests that as many as one in every hundred individuals may have some intersex characteristic. Intersex phenomena are not unique to humans. In a number of species, even more striking examples exist, for instance the bilateral gynandromorphic zebra finch (half-male, half-female body along its symmetry plane).

The definition of gender identity is a widely contested topic. In the majority of Western culture, there exists a so-called “gender binary” whereby sex and gender are divided into two non-overlapping, opposite and, disconnected, domains: masculine and feminine. Although the formation of gender identity is not completely understood, many factors have been suggested as influencing its development. Biological factors that may influence gender identity include pre- and post-natal hormone levels and gene regulation. Social factors which may influence gender identity include gender messages conveyed by family, mass media, and other institutions. One’s gender identity is also influenced by the social learning theory, which assumes that children develop their gender identity through observing and imitating gender-linked behaviours, and then being rewarded or punished for behaving that way. In some cases, a person’s gender identity may be inconsistent with their biological sex characteristics, resulting in individuals dressing and/or behaving in a way which is perceived by others as being outside cultural gender norms; these gender expressions may be described as gender variant or transgender.

So, it becomes apparent that gender identity can be influenced by many factors. As a consequence, many problems surrounding gender identity can arise. The most common of these is known as Gender Identity Disorder, which is defined as “formal diagnosis used by psychologists and physicians to describe persons who experience significant gender dysphoria.”

GID is often depicted in the media. Television episodes of Chicago Hope, ER and Law & Order, have all had plots based upon the topic. Three celebrated feature films, “Glen or Glenda?” in 1953, “Ma Vie en Rose” in 1997 and “Boys Don’t Cry” in 1999, have also presented an alternative view on the subject. Twelfth Night: Shakespeare’s play on Gender Dysphoria. In the play, Shakespeare links to the Eve of the feast of Epiphany: it was originally a Catholic holiday but prior to the Elizabethan era it had become a day of revelry. The servants wore their masters’ clothes, men dressed as women, and so on. This history of celebratory rituals provided the cultural backdrop for the plot of Shakespeare’s play, which centres around gender dysphoria. More recently, we have of course seen the success of Barry Humphries who has led an entire career impersonating a woman named “Dame Edna Everidge,” (whom has only recently been retired).

Little Britain: “I am a Lady!” sketch (for presentation.)

Kenneth J. Zucker, in his “GENDER IDENTITY AND SEXUAL DISORDERS

Testosterone and Oestrogen – their differing effects on the determining of gender.

Ethics of hormone supplements and gender reassignment surgery – with particular reference to GRS in the young. Can a minor be capable of choosing their own gender / going against their DNA heritage / gender from birth when he/she is legally not able to drive, smoke, drink in public, be responsible for criminal actions?

It is certainly true that gender dysphoria, gender identity disorder, transsexualism, and gender identity as a whole, are topical subjects. Arguably they are considered taboo, since to many they are unnatural and bizarre issues. Indeed, up until the early 20th century, discussion of gender identity and factors influencing gender identity rarely occurred outside a scientific context. Nowadays, disorders concerning gender are becoming more recognised and discussed by the wider community because of the (often negative) media coverage of such disorders. Nevertheless, it would seem that more progress can be made in terms of the way in which people with such conditions as “Gender Identity disorder” are treated, both in the medical world and by society. One particular statistic which highlights this fact is the following: An American study [1] that questioned young adults about their childhood beliefs and practices found that 39% of women, who experienced the highest level of gender dysphoria, endured some type of abuse, as did 30% of men.

Many people consider themselves to be cisgender, that is, belonging to either the male or female gender corresponding to their “assigned at birth” sex of male or female. Before the 20th century, someone’s sex would be determined entirely by the appearance of the genitalia, but as chromosomes and genes came to be understood, these were then used to help determine true sex. Broadly speaking, there are two groups of hormones, the androgens and the oestrogens, with the androgens promoting the development of male characteristics by binding to certain androgen receptors that regulate the expression of numerous genes; androgen regulated genes are critical for the development and maintenance of the male sexual phenotype. The oestrogens promote the development of female characteristics by binding to intracellular oestrogen receptors, which in turn regulate the expression of numerous genes. Oestrogen regulated genes are, conversely, critical for the development and maintenance of the male sexual phenotype. Of the androgens, testosterone is the most crucial and well known, because in men it plays a key role in the development of reproductive tissues such as the testes and prostate as well as promoting secondary sexual characteristics such as increased muscle, bone mass, and the growth of body hair [2] . Those defined as women, by sex, have genitalia considered female, as well as two X chromosomes; those viewed as men, by sex, are seen as having male genitalia, one X and one Y chromosome. However, some individuals have an inconsistent combination of these chromosomes, hormones, and genitalia that do not cohere with the traditional definitions of “men” and “women”. Also, other bodily attributes related to a person’s sex (body shape, facial hair, high or deep voice) may or may not coincide with the social category, as either woman or man. A survey of the extensive research literature between 1955-2000 suggests that as many as one in every hundred individuals may have some intersex characteristic. Intersex phenomena are not unique to humans. In a number of species, even more striking examples exist, for instance the bilateral gynandomorphic zebra finch (half-male, half-female body along its symmetry plane).

At this point, it is important to define the three key terms: “gender identity,” “sex,” and “gender role.” Gender identity is the “psychological recognition of oneself, as well as the wish to be recognised by others as fitting into one of the social categories [3] ,” (man or woman, boy or girl.) Sex is the more technical term concerned with the bodily anatomy: it is “the physical differentiation as male or female, indicated by the external appearance of the genitalia and the presence of gonads (testes in boys, ovaries in girls) which will then determine reproductive function, as well as differences in brain structure and function [4] .” Gender role is the role in society – “the interaction with others which both gives expression to the inner gender identity and reinforces it.” Despite the greater gender equality in modern Western culture in terms of: the subjects studied in school and at university; the choice of friends; work and domestic arrangements; dress and leisure pursuits, there is still a presumption of conformity to society’s pre-requisites about what is appropriate for a man or a woman, a boy or a girl, especially in terms of form [5] . Too great a deviation from the pre-requisites tends to result in reactions of anxiety from bystanders and often the bullying of those who exhibit these deviations: people with gender identity disorder and/or transgender people.

Gender dysphoria appears frequently in cultures of many different heritages. The term “third sex,” which means individuals that are neither man nor woman, but rather lie in between the two gender categories. The term can be applied to the Fa’afafine people of Polynesia, the Sworn Virgins of the Balkans, the hijras of India, Pakistan and Bangladesh, and others. A significant discussion of gender identity arose when Beck Laxton, a 46 year old mother from Cambridgeshire, announced publicly her ambition to raise her son to be “gender-neutral.” When asked why, she responded: “Because I wanted to avoid all that stereotyping… stereotypes seem fundamentally stupid. Why would you want to slot people into boxes? It’s like horoscopes: what could be stupider than thinking there are 12 types of personality that depend on when you were born? It’s so idiotic.” But numerous critics of Laxton’s position have highlighted that her decision will likely expose her child to bullying in later life. An adolescent disorder of anxiety or depression related to gender dysphoria or sexual orientation has been classified as “sexual maturation disorder” by the WHO under “Psychological and behavioural disorders associated with sexual development and orientation. [6] “ 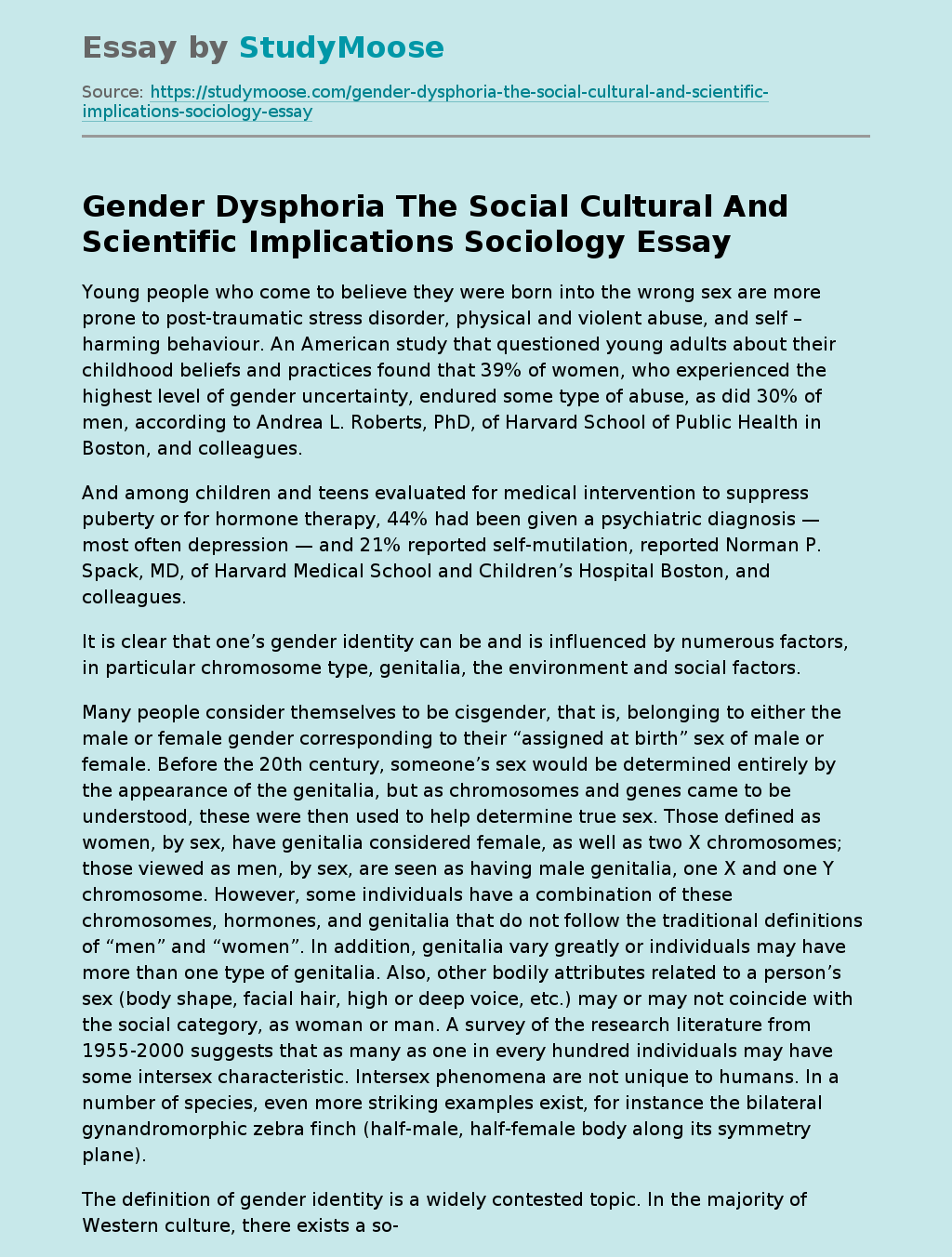