Gender role discrimination may be considered by many to be nonexistent to today’s society and that equality between the sexes has been achieved. Gender roles and relations still play a part in perpetuating inequality, and the effects of gender roles in relation to childhood, family life and at work. (Janedoe146, 2010) Over the last 30 years companies as well as society have begun to recognize that the nature of jobs, the workplace environment, and more generally, the culture of the workplace can have a significant impact on the ability of workers to balance their work and family lives.

Don't use plagiarized sources. Get your custom essay on
“ Women And Gender Roles In Society Sociology ”
Get custom paper
NEW! smart matching with writer

The word gender distinguished from sex, which refers to the male and female biologically. Those are the determined characteristics, for instance the reproductive organs and chromosomes. Whereas gender is, the feminine and masculine tense refers to characteristics and behavior that are not tied to biology but instead originate from the culture-specific perception, treatment of what sex you are and should be.

Gendered behaviors can include gender-specific clothing, speech, movement, activities, thoughts and feelings, and those norms may vary according to place, time and culture. Gender roles are relational and become more pronounced in the comparison of gender role successes and failures! Femininity equals what is not masculine; masculinity equals what is not feminine. Roles can be reinforced by positive and negative sanctions. Women and men that conform to gender expectations (men are breadwinners and women are mothers and homemaker’s) are positively sanctioned and those who refuse to conform to gender roles are negatively sanctioned named called (mothers boy and lesbian or tomboy).

Sanctioning can either be overt, for example legislation that criminalizes homosexuality, (such as in India and the Middle East) or covert, such as the prevalence of and bias towards extremely feminine females and masculine males in the media. Though gender is specific to context, it can have similarities across cultures, in particular gender inequality.

Gender roles persist in many areas of life starting from delivery, being wrapped in either a blue or a pink blanket depending on sex. After birth, people whom give gifts, seem to ask the sex of the baby even before inquiring about health, and then select gifts based on the answer just like at delivery blue for boys and pink for girls. These gender roles are obvious, like the role of woman as principal child giver, and some are more obscure, such as the institutions and social expectations that support women and not men in caring for children. In the toddler years, children are gifted with gender-specific toys that encourage them to play-act gender roles in practice for adult life. Often giving to are baby dolls, dollhouses, makeup, and hair dressing sets. This clearly schools them in the traditional gender roles of nurturer, housekeeper, and in the importance of being attractive. Boy’s toys on the other hand are action figures, cars and building sets. This enforces an emphasis on power, worker, and autonomy. At school, children learn from other children to differentiate gender appropriate toys, clothes and interests; other children socialized to value traditional gender roles are quick to point out behavior that goes against the norm.

Placement, thoughts and actions that were taught in a long-established way often gave a misleading image of gender roles. From each generations interiorize theirs parent’s model for instance the females are often found in the kitchen and laundry room along with the area of child giver This is extremely different from the males in the past they are usually found doing the hard labor like working or fixing different things. By the pattern shown this states that each partner has roles of responsibilities both at home and in society. Normally these roles are set in stone and are expected. Separate roles and responsibility lies primary on either male or female roles. With the every changing time-honored gender roles seems to be complicated by both genders not having or possessing the physical and mental skills. Then you also have stereotyping of the males and females roles in the family and outside. From the being of time, this world has always been a male world with men in the forefront, a male dominated world.

Society’ evolution about woman’s worth and placement has changed the traditional gender roles that many have known. By doing this, women are becoming more active at home and in society. They are becoming more motivated and striving to have independence. This leaves the balance of gender roles lopsided and a man are taking on the famine side, being more emotionally involved in household tasks. This is seen more and more as each year passes. Women are moving into the work force and men are becoming homemakers and caregivers. In these days and ages many more women have seen and felt the liberty of traditional roles. Many have the option and choice to be a home mother or a working mother or even both. The old anchored of the past in being lifted with new ways and new ideas. With the choice of work over family is known as the feminist model, which is the priority of a career. This is a new choice then from ones in the past. Balancing home and work is the anti-feminine type this also may be called middle model adopted by the double career type of woman, this seems to be the hardest but many or choosing this for many reasons. Either by the state of the economy or by choice the freedom to do so. This one shares a profession or career and family life equally. We are assisting to a reprioritization of woman needs and so professional success became more interesting and even attractive than family one probably because it brings something new. Women are motivated to choose the career by elements as the wish for financial independency, the need to prove her capacities, to open and better integrate in modern society and the possibility to control and not being only controlled. (Lifecho, 2007) All this reasons are making women move more toward the working world.

Many men consider a women’s career as a conflict source having arguments, for instance women will neglect theirs family attributions, the imminent change of man’s power and influence, his incertitude concerning the professional competition and the risk to deteriorate the marital relation. Even at first side man and children are felling the stress generated by the new status of woman, she is living an interior conflict as well. Woman need to understand her need for self-accomplishment by going to the work force but the remains of traditional mindset still affect her modern vision as for as the need to be the mother, wife and caregiver. (Lifecho, 2007) All genders in today’s workforce are less likely to hang onto the traditional ways in roles than before; working men’s stress has risen more dramatically over the years because of increased household and childcare chores; this is karma. Causing this is the coast of living, that there are many single fathers then before, also we have seen more father running the households’. We have seen the changing in the trends of both females and males attitudes and dealings over the past few decades, showing that changing gender roles have significantly and specifically increased the overall level of work-life conflict by men; they are now seeing both worlds.

I see with the severity and prolonged recession will drastically change not only household budgets and habits; it will surely also change the challenges of longstanding gender roles. Even though women still earn greater less then the men the granted income out weights the small pay, since the last 10 years more men have be laid off then women. The women are stepping outside of the home. Not saying all women will become the main breadwinners but as seen, many have put aside the home life and men have become the househusband. 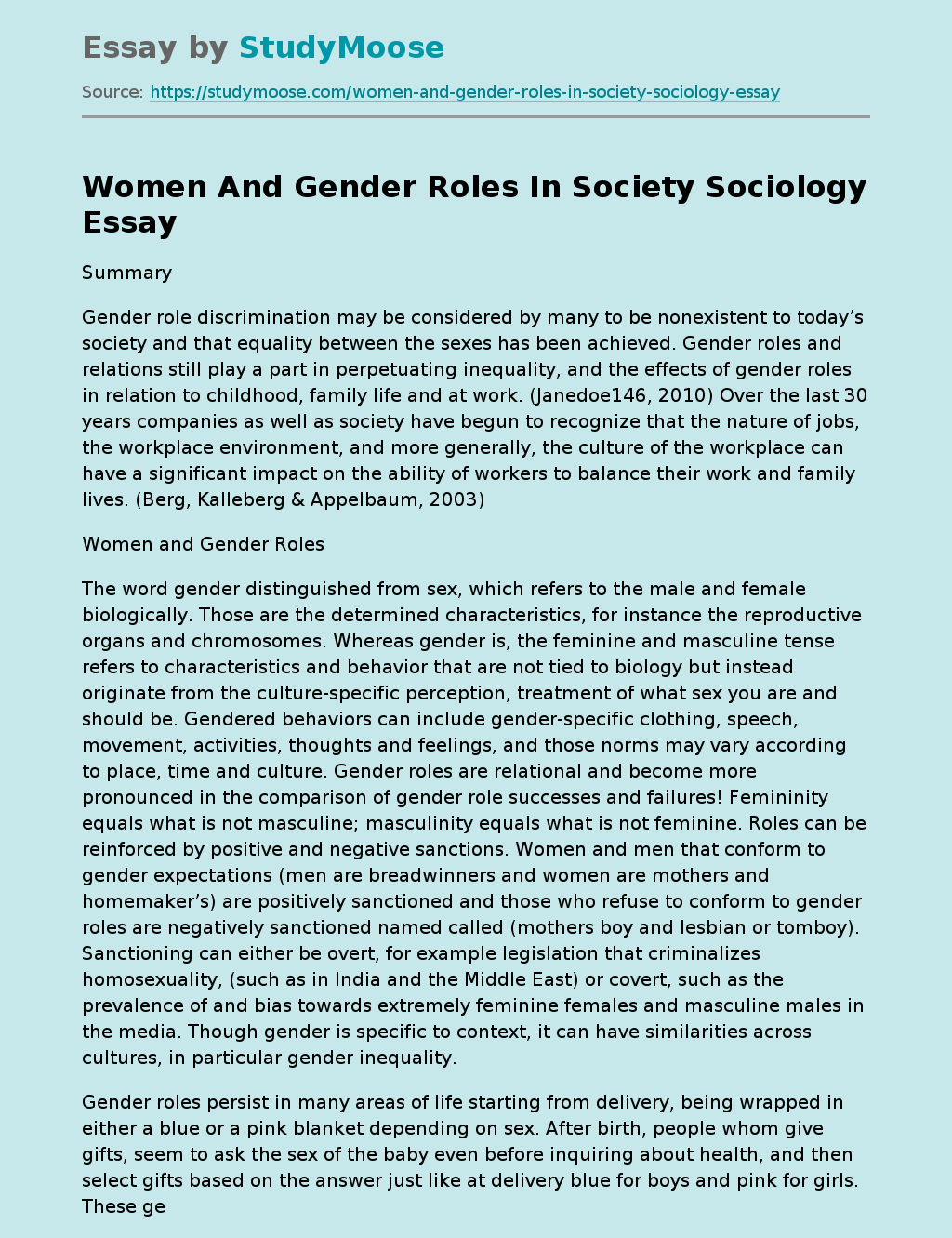