Gatsby: A Symbol of the American Dream

The Great Gatsby by Scott Fitzgerald depicts the story of an anomalous millionaire, Jay Gatsby, told by Nick Carraway, Gatsby’s neighbor who works in Manhattan. Gatsby rose his social status through immoral methods for a “golden girl” Daisy Buchanan. This legendary novel illustrates how characters, such as Jay Gatsby, have an ardent obsession with the American Dream, the idea that anyone can attain their own version of happiness and success, regardless of social status. Through the figurative symbolism of the Valley of Ashes and Gatsby’s inability to win Daisy’s love, Fitzgerald shows that regardless of how industrious a person is, they will never be happy, making the American Dream unattainable.

Don't use plagiarized sources. Get your custom essay on
“ Gatsby: A Symbol of the American Dream ”
Get custom paper
NEW! smart matching with writer

The Valley of Ashes, symbolizing the plight of the poor in Long Island, shows the backfiring of the American Dream.

A wasteland containing the industrial waste and ashes of the rich, the Valley of Ashes shows the predicament of the poor and those on the bottom of the social pyramid.

It is depicted as “a fantastic farm where ashes grow like wheat into ridges and hills and grotesque gardens,” (Fitzgerald 23). Instead of the luscious, green countryside normally associated with a farm, the Valley of Ashes is referred to as a “fantastic farm”, which “grows” ash instead of wheat. The beauty of nature is transformed into a nightmare of smoke and ash. Those who live in the Valley of Ashes do not get to enjoy the luxurious life on Long Island and lose their vitality, with little opportunity to escape and obtain the American Dream.

In addition to being at the bottom of the social pyramid, the lives of the people living in the Valley of Ashes, like Myrtle Wilson, are heavily influenced by the rich. Tom Buchanan had countless affairs over the course of his life and regards Myrtle as another mistress, whereas Myrtle believes Tom to be a ticket out of her marriage. Tom also controls and abuses Myrtle and “making a short deft movement, Tom Buchanan broke her nose with his open hand,” (Fitzgerald 37) when she spoke about Daisy. The rich treat people of a lower class as their playthings and control. Tom hit Myrtle because he could not control what she was saying, getting away with abusing or causing harm to Myrtle. George and Myrtle Wilson will never compare to rich Tom Buchanan, but Myrtle still continues to hope that she can be with Tom. She cannot be happy with George or be with Tom, rendering her helpless against the American dream.

Another representation of the unachievable American dream is shown through Jay Gatsby’s inability to win Daisy’s love. The son of poor farmers in North Dakota, Gatsby was born into the lower class of society, yet rises up the social hierarchy to become incredibly wealthy. Jordan Baker, one of Daisy’s friends, mentions one night that Gatsby “half expected Daisy to wander into one of his parties some night  but she never did,” (Fitzgerald 79). Despite having massive amounts of money and a mansion of great grandeur, Gatsby still perceives Daisy as the utmost status symbol and his idea of the American dream. From the beginning of the novel, Gatsby waits for his American dream, Daisy, to come to him, but it never does, forcing Gatsby to go in search of the dream on his own. However, Gatsby never reaches his American dream since after his death, “Daisy and Tom had gone away early that afternoon and taken baggage with them,” (Fitzgerald 164).

Daisy was unable to carry the burden of American dream projected onto her by Gatsby, so she stayed with Tom despite her feelings for Gatsby. This idea, in turn, shows that the American Dream is just a fantasy and unable to hold to have much weight and value. Daisy Buchanan is the perfect representation of the American Dream since she was born wealthy is the “golden girl”. Though Gatsby knows the American dream will be hard to grasp, he still strives for Daisy, only to have everything taken from him with his death and Daisy leaving. Overall, the Great Gatsby by Scott Fitzgerald uses the Valley of Ashes and Gatsby’s inability to win over Daisy to show that the American Dream is a flimsy fantasy which cannot be reached. According the the American Dream, people who work hard can become successful. But Gatsby resorted to immoral methods to increase his social status, ultimately leaving him nothing.

Gatsby: A Symbol of the American Dream. (2021, Apr 23). Retrieved from https://studymoose.com/gatsby-a-symbol-of-the-american-dream-essay 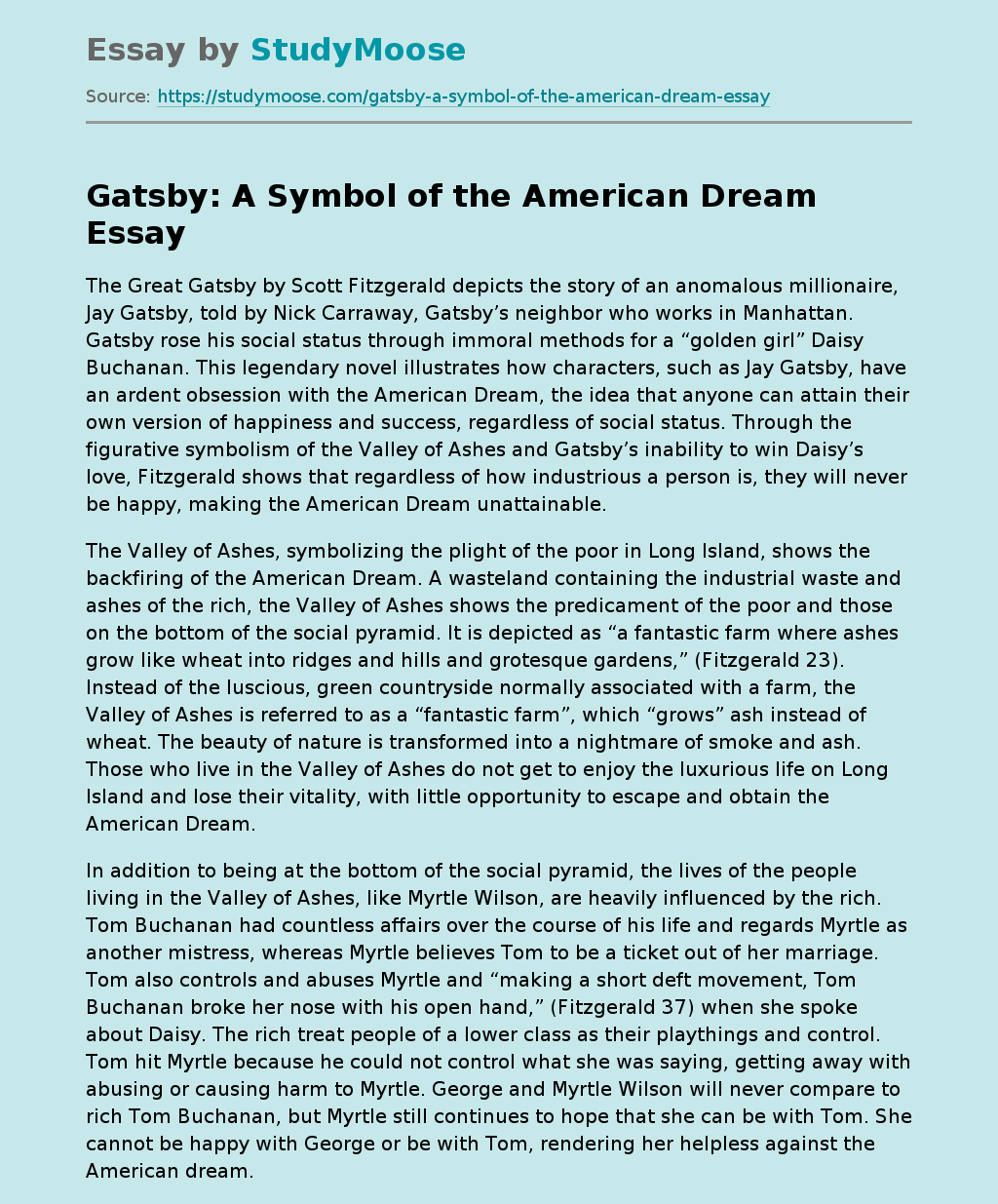