In so doing, Venkatesh revealed a complex mix of subculture (the Black Kings were a highly organised gang with a clear hierarchy, recruitment rituals, and socialisation processes) and culture – the gang were embedded in the day-to-day life of the Projects. Although their primary purpose was to make money through selling drugs (mainly crack cocaine), they also performed a range of secondary functions within their territory – from the provision of protection for Project residents from other gangs, through the organisation of social activities (such as Basketball games), to policing the Projects (involving things like the provision of shelter for “the homeless”.

Don't use plagiarized sources. Get your custom essay on
“ Gang Leader for a Day ”
Get custom paper
NEW! smart matching with writer

a. Ethnicity: His South Asian ethnic background allowed him to pass among the overwhelmingly African-American subjects of his study in a way that would have probably been denied to him if he had been white (since the only “white faces” in the Projects were those of the police – and, with one or two notable exceptions, they rarely ventured into the place except to make arrests and, it is implicitly suggested, extort protection money).

Venkatesh’s initial encounter with the Black Kings was one where he was mistaken for a member of a rival (Mexican) gang – his ethnicity was variously considered by the people in the Projects to be “Mexican, “Spanish” or the largely-ubiquitous label “Ay-rab”. The fact he was relatively young, casually dressed and a student at the University also gave him credentials accepted by both those in the gang and the Projects generally – something that leads into a second consideration:

His ethics, however, are questionable.

He started doing research and had not gotten human subjects approval. He deceived his advisor and dissertation committee about the extent that he was embedded into the gang. He saw clearly illegal activities take place and never told anyone, and once or twice did something illegal. Their claims are not only that he was unethical, but that he put people’s lives at risk, that he lied to his main informant, JT, to get into the research site, and the only person who has benefited from the book is Venkatesh. To be fair, Venkatesh did teach a course when asked to, and on occasion he brought food or drink (often alcohol) to parties and such.

The tenured radical folks mention approvingly Mitch Duneier’s Sidewalk (another great book) about homeless people and how he shares his royalties with those whom he interviewed The book’s main focus is on race, as it examines the day-to-day struggles of the virtually all African-American residents in a poor housing project. However, there is much in the book that could be mined for courses in deviance, race⁄ethnicity, inequality, research methods, sociology of organizations, and to a lesser extent, gender. Issues of class, race and identity also surface, as Venkatesh (the child of middle-class South Asian immigrants) discusses his role as a “brown man” Southern Californian, and how his experiences shape his academic vantage point. Venkatesh sets up a clearly delineated debate on the qualitative-quantitative divide, coming down squarely on the qualitative side, learning early that the question “How does it feel to be Black and poor?” is not easily answered using a Likert scale.

He deftly highlights issues of ethics, identity, race⁄class⁄gender dynamics in data collection, the realities of ethnographic work, and the value and use of qualitative versus quantitative methods of collecting data. Gang Leader for a Day throws into sharp relief the thorny issues of conducting ethical research. For instance, Venkatesh struggles with maintaining allegiances with powerful community members, while trying to forge close ties with less powerful residents.

Venkatesh gives refreshingly honest, clear examples of his missteps. For instance, he focuses the target of his research on the underground economy of three high-rise buildings within the gang’s territory, and collects detailed information from residents about how much money they make, expenses they incur and so forth. Venkatesh talks with pimps and prostitutes, as well as those who sold food or offered child care in their apartments, styled hair, prepared taxes, offered psychic fortune telling, performed carpentry, fixed cars, collected scrap metal, as well as a host of other off-the-books businesses. Venkatesh provides a vivid, gritty account of life in a notorious Chicago housing project. His book interweaves issues of social class, race, ethnicity, gender, crime, deviance, and the study of organizations. Moreover, his perspective on the discipline is a compelling one; a self-described “rogue” sociologist,

Gang Leader for a Day. (2016, Mar 26). Retrieved from https://studymoose.com/gang-leader-for-a-day-essay 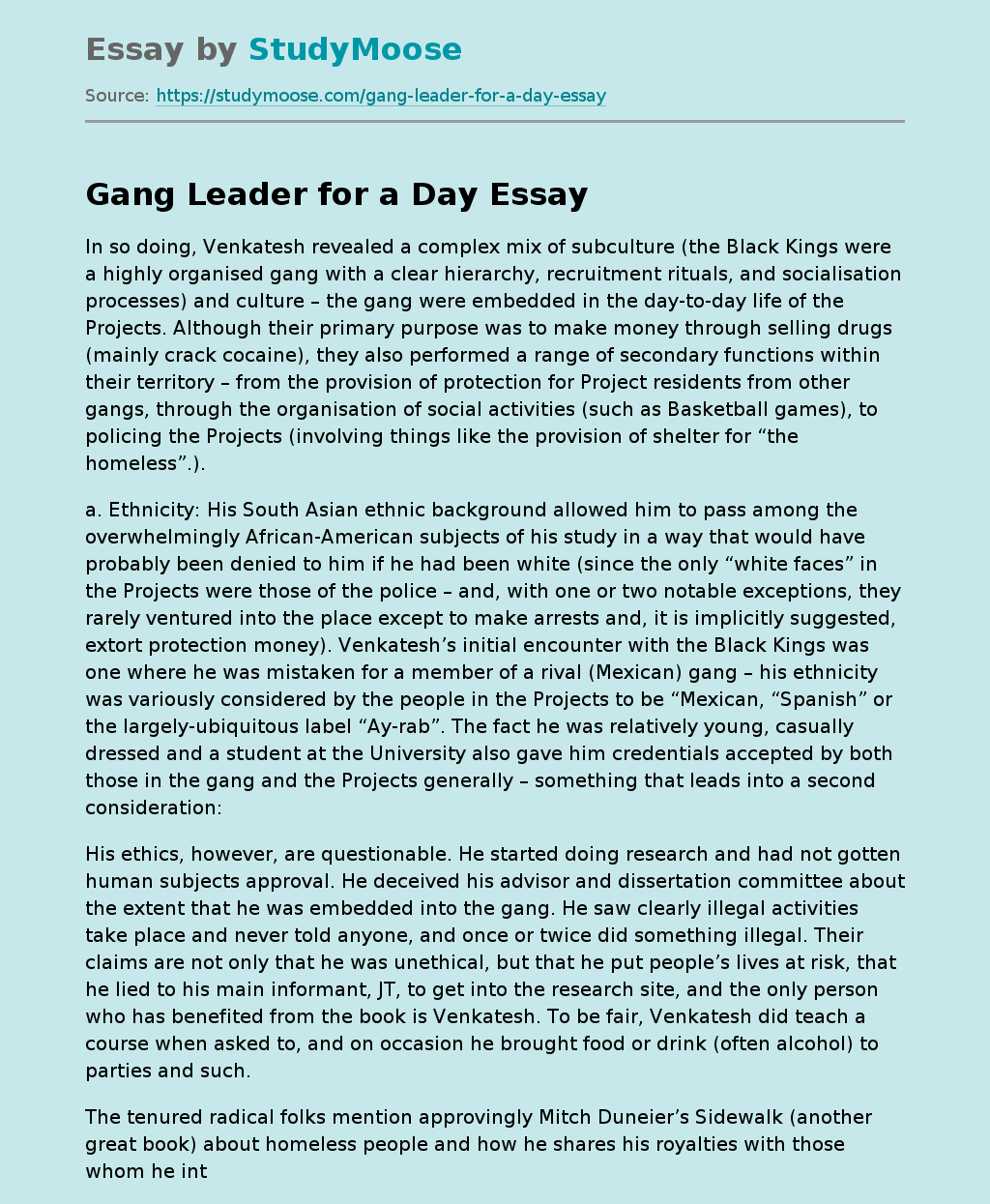